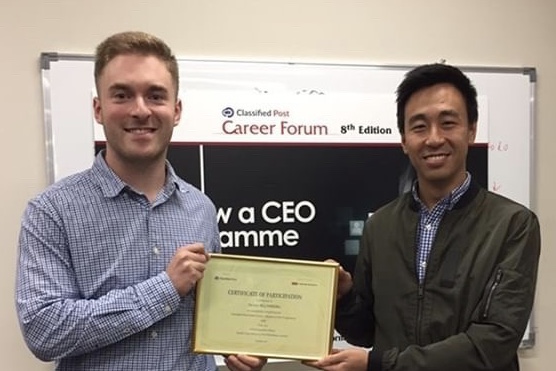 Along with the seniors of North Penn High School, North Penn Alumni Steven Blumberg is getting ready to graduate and move on to the next stage of his life. On June 13th, Steven is prepared to walk the stage of Drexel University, after five long years of hard work and dedication. His time spent at Drexel have earned him not only a degree in Marketing and Management Information Systems, but a long list of memories and experiences that will guide him to success in years to come.

Mr. Blumberg was well-known during his time at North Penn, being highly involved in multiple areas of interest. From sports to clubs, he was always able to keep himself busy when he wasn’t studying or hanging out with friends.

“[My] main [club] was FBLA (Future Business Leaders of America). I was First Vice President of the state, as well as Vice President and membership recruiter at the local level,” shared Blumberg.

Steven also participated on North Penn High School’s junior varsity volleyball team, was a member of the National Honors Society, and ran the Knights Knutrition stand, but undoubtedly, his interest in FBLA played a major role in what he was to do at college. After graduating North Penn, Steven took his education to the great city of Philadelphia, attending Drexel University. Five years in the city as a business student has provided Steven numerous opportunities to help him grow as a person – opportunities that have guided him to the right path and hopefully the right career.

“I just accepted a job on the Product Team for Comcast Business and have been working there for the past year – first co-op then part time while I finish up my degree,” Blumberg announced.

It can be easily determined that Steven hasn’t wasted anytime bettering his education and chances at a successful future. North Penn served its purpose when it came to North Penn Alumni Steven Blumberg, as he has done nothing but positive things to represent his alma mater.

What do you remember most about North Penn?

“How kind and supportive most of the teachers were. I can’t say I was the best student but I always tried to take up a good opportunity when it was presented and the faculty at North Penn really did try and give us exposure to some areas that helped a lot in college. From being allowed to run the social media for the school play (Aida I think was the show) to running a small business after school with the snack stand, teachers and administration alike really did play a big role in who I became in college, and who I am today.”

“The business classes, FBLA, and that snack stand. A few of us had a good run taking a lot of good opportunities that were presented to us and we had a lot of fun. It certainly wasn’t easy, but being 16-18 and having to figure out profit margins, get customers, work with suppliers (chick-fil-a Thursdays we started, not sure if that is still a thing) is something I’ve certainly miss.”

What is/was your favorite part about college?

“The Freedom! I’ve been able to study abroad (Hong Kong), connect with hundreds of new friends, enjoy living in the city of Philadelphia, and connect with really incredible faculty and administration. I continuously am challenged and it has made graduating a really great experience because I feel very prepared for the next steps. At 5 years out from North Penn, I see how much being on my own has helped me grow and that has been the best part.”

What are/were you involved with at your college? Sports? Extracurriculars?

“I joined a Fraternity Alpha Epsilon Pi and held a bunch of leadership positions there. I ran the school paper’s business department (the Drexel Triangle) and brought it to profitability. Am a member of the Dragon ’24 (Provost of Drexel University’s Advisory Board). Lastly, I did the study abroad at Hong Kong University, which was great.”

What do you do during your free time now? Working? Hobbies?

“I love to travel! Since high school, I’ve been to 10 countries and all over the US which has been awesome and made friends all over the world. Going to great restaurants with friends has been fun in the city. Also, I’m a big art fan, ever since taking AP Art History I have been a member of the Philly Art Museum and enjoy going there pretty frequently.”

Do you have any advice for current North Penn students?

1) If you can continue to be challenged, find amazing people who make you happy, keep yourself healthy, and call a loved one at least once a day…you’ll have success!

2) Be someone who is worth mentoring. Listening, turning advice into action, and thanking those who help you turn you into someone that people want to help. That will bridge the gap between where you are and where you want to be.”