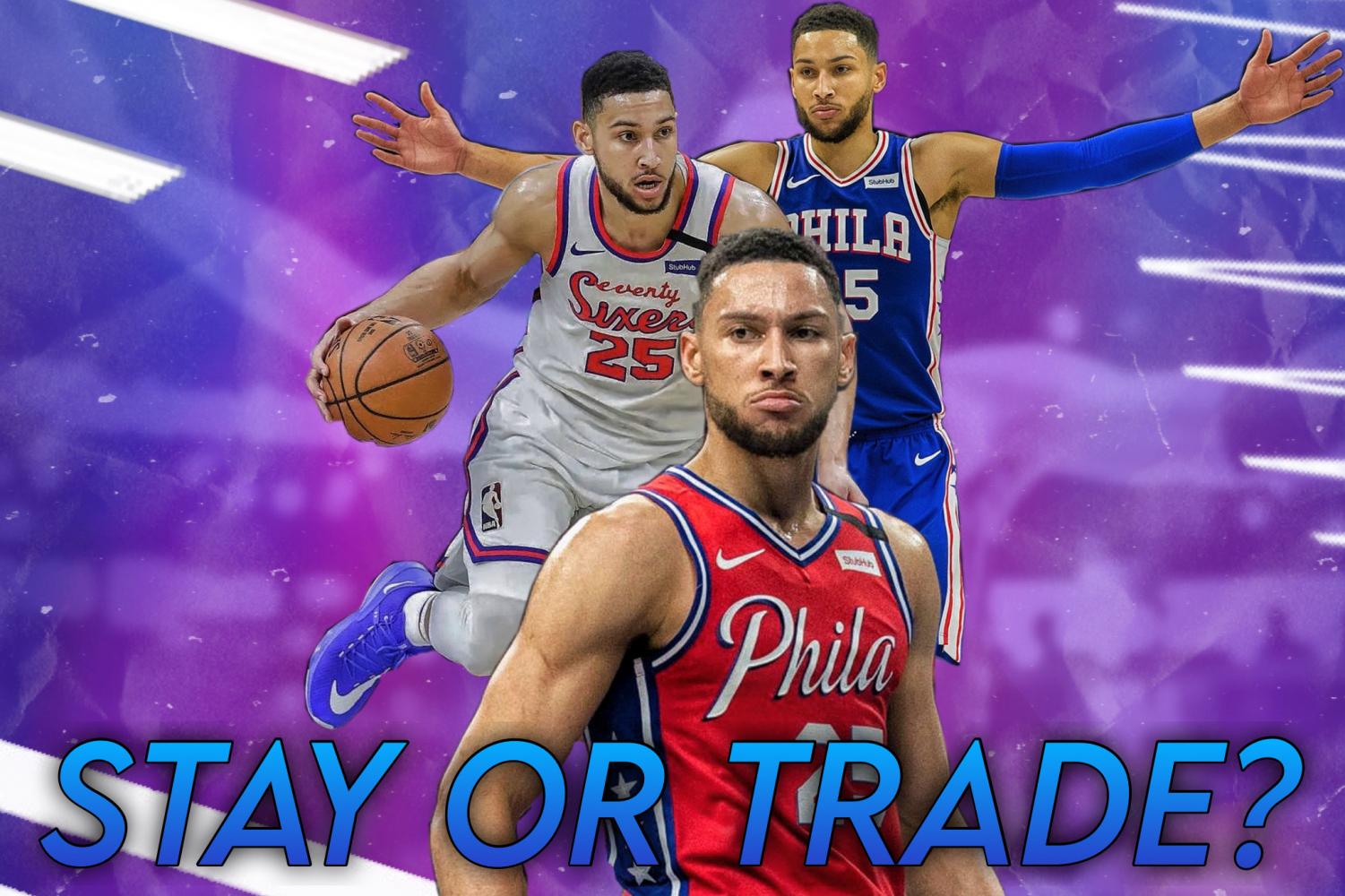 Should Ben Simmons be traded?

Ben Simmons needs to be traded

The common saying “if something ain’t broke, don’t fix it” can usually apply to many aspects of the Sixers. Joel Embiid is performing at an MVP level, Tobias Harris seems to be a capable secondary scorer, and, most importantly, the Sixers are winning games. With the top seed in the Eastern Conference, the Sixers are succeeding more than they have during the entire 2010s.

But there is one thing that is broken; Ben Simmons.

The Sixers may have a real shot at capturing an NBA championship. But with Ben Simmons on the roster, this will never be possible.

The depressing reality is if the Sixers want to dominate, the two-time All-Star must be traded. No player has hindered the true potential of this squad like Simmons has the past four years.

As it is right now, Simmons and Embiid are the two clear best players on the court. They need to lead, play defense, and do anything they can to win. But to win the close playoff battles, the Sixers need something Ben Simmons does not possess: the ability to score at all three levels.

Of all the contending teams, the Sixers are the only team that has only one true scorer.

The Brooklyn Nets have 3 of the greatest scorers ever in James Harden, Kevin Durant, and Kyrie Irving, the Celtics have Jayson Tatum and Jaylen Brown, the Lakers have Lebron James and Anthony Davis, and the Clippers have Kawhi Leonard and Paul George.

The Sixers only have Joel Embiid. While Embiid posts MVP numbers, he cannot be the sole clutch scoring provider in the playoffs. He deserves someone right on his side, a reliable player who he can kick out to and create space for himself, whether it be at the perimeter or inside the arc.

Ben Simmons cannot do that. Even with his playmaking skills and handles, Simmons is not trustworthy in late-game situations. No amount of practice will fix his jump shot. He is always a year away from being a year away. And it’s not like he has been the greatest this season.

13.4 ppg is a career-low, with a career-low 53.7% from the field. 53.4% is not particularly bad. But there needs to be context. Simmons takes 85.3% of his shots inside 8 feet (99.8% of his shots inside the arc); it is clear he is still not willing to change. His PER rating is the lowest it has been since entering the league, ranking below players like Immanuel Quickley, Naz Reid, Mo Wagner, John Konchar, etc. These are all players that are on pretty bad teams, are young, and lack experience.

89th in offensive win shares and 5th in highest turnovers per 100 possessions does not help the argument. How can your playmaker and court general be committing turnovers at the 6th highest rate? It does not work. If these liabilities persist, it creates a problem that will be the end of the Sixers’ glamorous run this season.

Without spacing, teams clog the paint, resulting in less space for Joel to do his work inside the paint or from the low post. While Simmons provides great playmaking and DPOY level defense, he will only bring this team down come playoff time. A primary ball-handler needs to shoot. Joel Embiid needs a tireless scorer who can shoot. It is that simple. The Sixers already have a few answers to fill the void of Simmons.

Off the bench, Shake Milton has been posting 6-MOTY stats. He provides most of the bench scoring for the team and has been capable of getting plenty of points. In games this season where has played 25 or more minutes, he averages 19.12 points. In the same games, he averages 1.5 steals, and the team has a record of 6-2. He may not provide the defense, but he can certainly step up. Likewise, Tyrese Maxey can do the same. He has been one of the most impressive players in his class. Maxey has played 11 games above 20 minutes and he averages 14.27 points in those games, so he is also more than capable of bringing the same type of scoring impact as Simmons.

The difference between the two is the long-term potential for the team. Simmons’ growth has been relatively stagnant. While his defensive game has become better since entering the league, nothing has changed offensively. But there is an answer for that too: Matisse Thybulle. This season, Thybulle holds his opponents to just 36% from the field. With this, he’s the third-best among qualified perimeter defenders in block % and first in steal %. These stats reflect the percentage of opponent possessions that end with a steal/block by Thybulle. His 6’11” wingspan lets him guard the best of scorers.

Each of the three aforementioned players has skills that can develop them into being extremely good compliments next to Joel Embiid. As previously mentioned, spacing is going to be the key for the Sixers moving forward. If spacing can be created, Embiid will not only continue to have his monstrous MVP campaign, but he will perform even far more efficiently. But upholding that spacing is particularly hard when the point guard cannot shoot at all. Soon, players like Seth Curry and Tobias Harris might return to earth, and the spacing issue will occur again; think similar to the year before Butler where the only consistent shooters the Sixers had were JJ Reddick and Marco Bellinelli. Besides them, the ball movement on the court was stagnant, and having that issue deep into the playoffs will only hurt the team.

So, who do the Sixers trade for? The answer is none other than Bradley Beal. There might not be a player who fits better next to Embiid than Beal. An off-ball scorer machine is perfect for this team. The duo, if created, will surpass any expectations they have right now. Beal will be the key piece if the Embiid and the Sixers want to create NBA history.

A trade may not happen anytime soon, but Morey is not afraid to pull the trigger. Do not be surprised if he is dealt by the trade deadline.

There’s a saying that goes, “If it ain’t broke, don’t fix it.” This is the precise mindset the Philadelphia 76ers should have when it comes to trading away Ben Simmons.

The Sixers own an impressive 12-0 record when all 5 starters play, and sit on top of the standings in the eastern conference. There is no reason that the Sixers should look to trade anybody in the starting 5 with this kind of success going, let alone the point guard.

Not every player on your team has to be an elite scorer or 3-point shooter. Ben Simmons is definitely not. However, there are several other aspects to the game of basketball that Simmons has that not many other players do.

Also, when Simmons decides to get aggressive, his size and quickness makes him a mismatch for almost anyone that defends him in the league. He becomes a very difficult person to stop while on the defensive end of the floor.

These are the types of things that someone on your team has to be able to provide at an elite level, and Ben Simmons can do it with the best of them. No other player that we would get for Simmons would be able to provide the things he does at the level he does.

Now on defense it gets even better. This season, the Sixers as a team have given up the 11th fewest amount of points per game at 110.2 ppg, but in the 3 games Ben Simmons hasn’t played in, they have given up an average of 116 ppg which would rank them 25th in the league.

Simmons has a rare ability due to his size and athleticism to cover anybody on the floor at once when it comes to defense. It is super valuable having a guy that can cover the other team’s best player regardless of who it is or what position they play each night.

“I couldn’t care less about Ben’s shooting. And I’m being honest. I want Ben to be a player. Ben’s a great basketball player. Ben makes plays. Ben has vision that only 5-10 guys in the NBA have. And he has it with size,” Rivers said in an interview with TalkBasket.

Rivers knows that you don’t necessarily have to have a guard that can shoot the lights of a building. While in Boston, he was able to win a championship with Rajon Rondo, who is not a guard know for his ability to put the ball in the basket from beyond the 3-point-line.

“We won a world championship in Boston with Rajon Rondo, who they quote-unquote said you can’t win with a non-shooting guard on the floor. Well, we didn’t have a problem winning at all that year,” Rivers said, in the same interview with TalkBasket.

In the most recent game with Embiid in and Simmons out, the sixers lost to the Trail Blazers by the score of 121-105. In this game, they shot just 7-27 from 3-point range. This included 0 three pointers in the entirety of the first half. Ben SImmons leads the NBA in assists on 3 point shots and this is a big aspect of his game that they missed.

Once Simmons is traded, they will no longer have his abilities and skill set to help the team win. Again, this team is 12-0 with the starting lineup. There is absolutely no reason the Sixers should want to mess this part of the team up at all. Any team going this strong together deserves to stay together because they all bring something to the table that helps this team win.

All of these components are just as important as another so removing one of the players and their skill set would be dumb, especially when no one has stopped them yet.

Overall, Simmons may not be the best scorer, but the other aspects of the game he brings like his rebounding and defense are vital to the team’s success and the Sixers would be foolish to trade him.