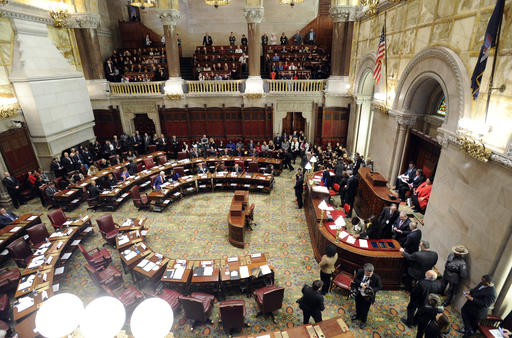 Members of New York state’s Electoral College sign documentation after voting for president in the Senate Chamber of the Capitol in Albany, N.Y., Monday, Dec. 19, 2016. (AP Photo/Hans Pennink via AP,Pool)

Is there a place for the Electoral College in the 21st century?

Time for a change with the Electoral College

In the 2016 election, a majority of America’s population voted for Hillary Clinton to be the president. However, Donald Trump pulled out the win. How is this possible?

Established in the first section of the Constitution, the Electoral College is responsible for electing both the president and the vice-president of America. As History House explains, each state has “as many ‘electors’ in the Electoral College as it has Representatives and Senators in the United States Congress, and the District of Columbia has three electors.” These representatives are supposed to represent the wishes of that state.

One of the biggest flaws in this system, however, is how “black and white” it is. There’s no room for a grey area. For example, 51% of a state may vote for one candidate, but the other 49% could vote for another. Instead of splitting the electoral college votes exactly as the popular vote, all of the votes go immediately to the majority. This creates quite a discrepancy between what the country wants versus what the country actually gets.

Another impending problem comes from “faithless electors”. Usually, a state will bind the members of the electoral college to vote for who they declare they’ll vote for. Essentially, people want to make sure that the representatives are keeping their word.

This disparity and unlawful behavior in the system is precisely why the electoral college should be scrapped. Just because something worked in the past doesn’t mean it should continue on to the present. Times are changing, and we should change with them.

Electoral College must remain in place

“Now that Donald Trump has won the presidency despite losing the popular vote, there’s a growing cry to rethink, or even abolish, the Electoral College. This would be a mistake.” – William M. Daley (Former White House Chief of Staff)

Daley has a point….two points in reality. First off, abolishing the Electoral College, a political system that has been in use for over two-hundred years, would be a mistake. Secondly, the movement to get rid of the Electoral College is due to the fact that Donald J. Trump won the election. His victory may not be the entire reason why politicians are attempting to remove the Electoral College, but it definitely plays a main role in their efforts to do so.

What exactly is the Electoral College? This method of voting takes the concept of the popular vote to the state level. When voters attend election day and choose their candidate, they are actually choosing where they want their state’s electoral votes to go. For example, Donald J. Trump won the popular vote in Pennsylvania in the 2016 Presidential Election. Because of this, Pennsylvania’s twenty electoral votes were allocated to favor Trump in the National Election.

In my opinion, this is the most effective way of electing a leader, especially that of such high ranking. By choosing to keep the Electoral College, each state is being represented equally. Although each state is given a different number of electoral votes, the specific number given correlates with its respective representation in the federal government, indirectly correlating with its population. Yes, there is a chance that a president can win the election, while failing to win the national popular vote, hence the election of President Trump, but there is nothing wrong with that. Actually, this goes to show how the Electoral College ensures that the right leader is being chosen. If the national popular vote determined a presidency, states aren’t being equally represented. The 2016 election is a prime example of this flaw. Hillary Clinton would have won the election if the national popular vote was the decider, taking away the voices of each individual state. This is because, in reality, Donald J. Trump received more support when looked upon at the state level….the way it should be.

Using the national popular vote takes away the opinions of smaller states, cities, and districts. Around 1.06 million people currently reside in the state of Rhode Island. On the other hand, around 8.4 million people live in New York City alone. If the national popular vote was in effect, assuming both Rhode Island and New York City voted different ways, a city in New York has more say than the entire state of Rhode Island. That doesn’t seem fair does it?

The Electoral College is also something that is listed in the Constitution, so taking it away isn’t also a bad idea, but unconstitutional. That being said, it isn’t worth it to waste time and resources in trying to change a working system, when it will be difficult to gain the support necessary of change.

Some of the solutions to ‘fix’ our political voting system seem to make it worse, as if our current system is so terrible. At the end of the day, it comes down to accepting the results of the election. Your candidate can’t win every time. Just because your candidate lost, doesn’t mean that the election process must be changed. The Electoral College was implemented for a reason, and has served its purpose for years, and hopefully years to come.

Nevada’s Democratic Governor Steve Sisolak recognizes its importance, as he recently vetoed legislation to commit his state’s six electoral votes to elect the candidate according to the national popular vote. Sadly, other states and Governors do not have similar opinions on the matter, as the list of states that agree to elect the president by popular vote is slowly growing: DC, DE, HI, RI, VT, CO, CT, MD, MA, NM, WA, CA, IL, NJ, NY

To keep up with the movement to abolish the Electoral College, you can visit https://www.nationalpopularvote.com/ , a website that breaks down the views of each state.

Want to learn more about the Electoral College? Feel free to use the link below to inform yourself about this method of electing government officials. I hope you come to realize that our elections need to stay the same.