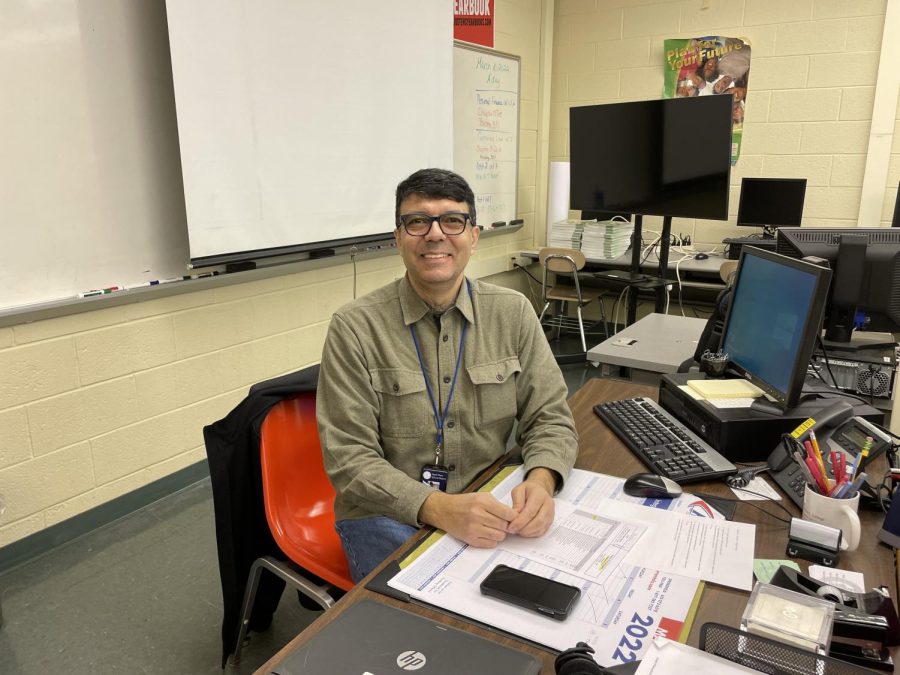 Mr. Aladdin Abou-Ouf setting up in his assigned classroom of the day: E136

Think about it- students typically don’t know much about their substitutes, let alone the adventures they have been on in their lifetime. Let’s meet a substitute everyone has had, but never truly met.

The average high school substitute may appear one way on the outside, but could in reality be living an extraordinary life full of unexpected twists and turns, and students could have no idea about any of it. Mr. Aladdin Abou-Ouf is a substitute at North Penn high school, and accurately represents the idea that not everyone is as they seem.

Abou-Ouf is a well-known figure at North Penn. Whether people know him for his approachable aura, kind presence, or helpful advice, the 6th year North Penn substitute takes pride in his ways of connecting with people, regardless of where he may be in the building on a given day.

“I like to help people and make their life easier. I give my experience to everyone who needs it, and make their future brighter and more positive, as much as I can,” Abou-Ouf said.

Aside from being a part of the North Penn family, Abou-Ouf has a passion for traveling and exploring what the world has to offer. He definitely did not follow a definite path when finding his way to North Penn. Prior to moving to Pennsylvania, he experienced another lifestyle in Egypt, where he worked as a tour guide, allowing him the opportunity to see the world.

“If I had the opportunity to travel I would take it no matter what… I’ve traveled to seventeen countries worldwide, and thirty-four states in the United States. I like to travel; it’s my life to travel, to see different people, different mentalities, different cultures,” Abou-Ouf explained.

Being a tour guide brought so many opportunities for Abou-Ouf to see the world and what different places had to offer. There are so many unique places in the world, and Abou-Ouf recognizes this everywhere he travels.

Because of a revolution, however, life in Egypt collapsed, including jobs for many people. Abou-Ouf needed to leave, and chose the United States to start over. Upon arriving, an opportunity with teaching for Temple University arose that seemed to be calling his name.

While teaching at Temple, there were some gaps in Abou-Ouf’s schedule, leading him to explore the possibility of picking up another teaching opportunity. North Penn seemed to be the perfect place, and his journey continued there.

“I teach language at Temple University, and I was working afternoons, so I was looking for something to teach in the morning. I found [North Penn] and it was wonderful,” Abou-Ouf explained.

Interacting with all types of students is one of the most entertaining parts of the life of a substitute, and Abou-Ouf can confirm this.

“The life in North Penn High School is an interesting one because I meet people from all over; they are all different. For most kids, it’s very nice and I like them. The majority is very good,” Abou-Ouf said. “Some kids are hyper, some kids are very nice, some kids focus, some kids want to be something in the future.”

To play a role in a school as someone who interacts with different people every day, you typically want to maintain good energy and a positive attitude. Abou-Ouf possesses these qualities and does his best to personalize with everyone he meets.

“You have to give a positive attitude and encourage all of the kids to be something in the future… I like to help people, I like to do something useful. That’s why I like to be here.” Abou-Ouf said.

As far as background pertains, Abou-Ouf has an impressive resume that shows just how diverse his career path has been. He has a bachelor’s degree in Business Administration and two master’s degrees; one in Hotel Management and one in Egyptology.

Not only does Abou-Ouf have experience in many professions, but he has some hobbies that he enjoys, as well as an intellectual talent that not many people possess.

“I read every night for thirty minutes in four or five languages. I speak English, German, French, Italian, and Arabic,” Abou-Ouf said.

Abou-Ouf has a passion for understanding and using different languages every day. Throughout his life, he has picked up on various languages that have shaped who he has become.

“In Egypt, during elementary school, all of the subjects were in English. When I was in middle school I picked French. In high school, I added German… I got the opportunity to go to the Italian culture center, and I started to learn Italian, and I worked with it for years and years, and it was very nice,” Abou-Ouf elaborated.

Abou-Ouf’s experiences, wherever he may be in the world or whatever language he may be speaking, shaped him to become the influential person he is today. Throughout his journeys around the world and in his career teaching, Abou-Ouf has realized one big idea.