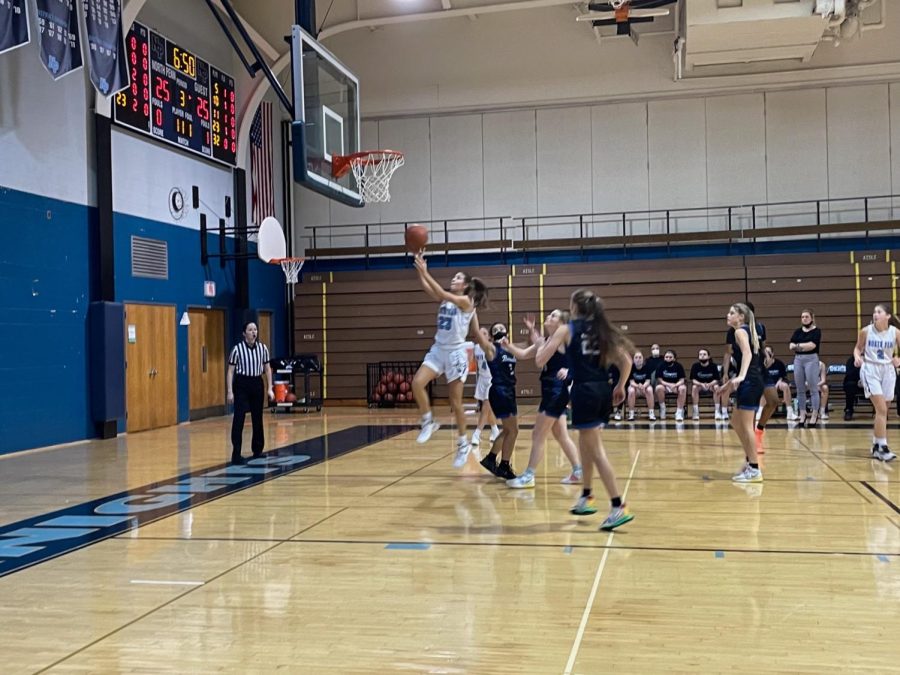 Liv Stone going for the layup and scoring two points for the Knights.

TOWAMENCIN- During a close game on Tuesday night, the Knights girls basketball team fell just 6 points short within the last 4 minutes of the game, causing the Bensalem Owls to take home a win in this non-league matchup.

The Knights (3-5) played a hard-fought, back and forth game against the Owls (2-6), but in the end, couldn’t lock it down. The Knights took control in the second half, holding a lead until Bensalem charged back in the last few minutes winning 65-59.

“We knew that even though it was really back and forth, we were still in the game. That we could still come back and go on a run and get ahead. We are just always trying to push the ball,” sophomore captain Liv Stone emphasized.

As the whistle blew for the tip-off, the Owls got a quick jump start, securing possession of the ball. It took one pass before junior captain Abby Plaugher stole the ball mid pass and scored the first two points of the game. Soon after that the Owls came back scoring a three-pointer. The rest of the first quarter consisted of heavy pressure on each team’s defense as the score went back and forth. The final score of the first quarter had the Owls taking the lead of 14-11.

“There was a lot of effort. I wouldn’t say there are any effort questions there, it’s just getting that effort in the right direction. It’s when there are tough moments in the game, effort versus composure is what we are lacking,” assistant coach Collins said.

During the second quarter, the battle for the ball continued. While the Owls had many shots, the Knights had no problem getting rebounds, then dribbling to their half. With a minute and 39 seconds left, Stone tied up the score after getting fouled and making both foul shots. With only a minute left, the Owls held the ball hoping to run out the clock. Eventually, it was time to take their shot, but sophomore Caleigh Sperling blocked it with two seconds left in the quarter.

“Caleigh gave more than anybody should’ve ever asked from her in a basketball game tonight, whether that stat sheet shows it or not. She was there for us on defense. Liv Stone, masterful defense, fouls early, stayed in the game, didn’t take herself out of it, and just is a tough player all around,” Collins expressed.

After the first half, Stone had a total of 8 points, followed by Sperling and freshman Cam Crowley both contributing 5 points. Plaugher totaled at 3 points and sophomore Keira Sparango added 2 points.

“Some of the main motivations from our coach was to take open shots, play hard, push the ball, get good defense and play our game,” Crowley stated.

Bensalem led 25-23 at halftime, but within the first 30 seconds of the third quarter, Crowley scored a three-pointer giving the Knights a lead. That shot had a snowballing effect because soon after Stone scored two points and Plaugher kept the streak going by scoring another three-pointer. With the Knights having their first lead of the night, the final score of the third quarter was 35-32.

“We never have a motivation issue. Our girls are always fully motivated to go in and play hard. We just now have to learn how to come out on top because it’s always just one basket or two baskets,” assistant coach Secoda explained.

The outcome of the game all came down to the fourth quarter. The first half of the quarter was very back and forth until with 4 minutes and 14 seconds left, the Owls tied up the score 39-39. The intensity of the game escalated and the ball movement for both teams became much more fast-paced. With 18.8 seconds left, the close score of 46-45 Bensalem had everyone anxious. After a timeout was called by North Penn, the Owls had the ball, and North Penn purposefully fouled hoping to get the rebound and score a three. Unfortunately, the plan didn’t work out in their favor before the clock ran out.

“In a pressured situation like a game like this, you learn a lot about yourself as a team. Our youth showed a little bit tonight and handling that kind of pressure is a big learning lesson. Bensalem was very prepared, they came out and they played really hard. There has to be a winner at the end, unfortunately, it wasn’t us,” head coach Bri Cullen said.

The Knights are back on the court on Friday at 7 at Council Rock North High School.