UPDATE: As of 6:30pm, School board election results pending as mail in ballots to be counted in county 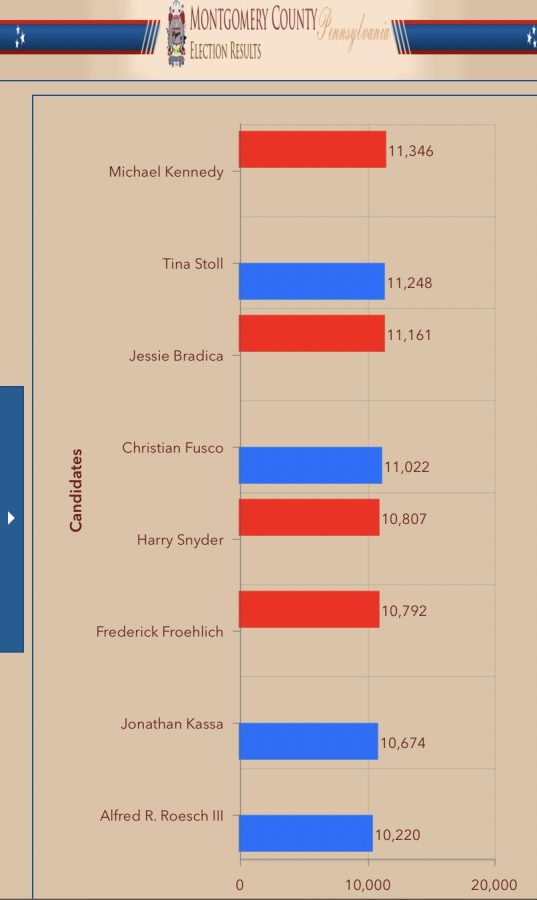 Election results for the North Penn School Board as of 6:30am.

LANSDALE – Mirroring many major US elections over the last few years, the 2021 campaign for North Penn School Board Director continued to prove that in local elections, every vote counts.

With approximately 23,000 mail in ballots still being tabulated across the county,  results are not yet official, but as of 6:30pm, Michael Kennedy (R), Tina Stoll (D), Jessie Bradica (R), and Christian Fusco (D) are holding the lead. As of this count, just 215 votes separate Fusco from challenger Harry Snyder. Incumbent Jonathan Kassa trails by 348 votes.

If the results hold up as they currently stand, Stoll, current board President, and Fusco will retain their seats, and Kennedy and Bradica will join the board, sending the Democrat/Republican balance back to 7-2. The last time an election resulted in a 7-2 split was when Caroyln Murphy and Suzan Leonard won as Democrats in 2015, at a time when the board was comprised of 9 Republicans.

Stay tuned as the morning progresses for updated numbers.

The following statement is posted on the Montgomery County Election Results website:
Mail-In and Provisional ballots are still being processed. All ballots cast in person have been recorded. The County will continue to update the dashboard below on a regular basis in the coming days as eligible ballots are validated and counted. Due to several factors, final results are expected to be delayed.
First, the County is sequestering the returned ballots related to the previously announced misprint of mail-in ballots by its printer. Affected ballots are subject to a separate verification process that was approved by the Montgomery County Board of Elections and shared with both political parties as well as the Pennsylvania Department of State.
Second, the County encountered a higher than usual number of ballots that cannot be read by the ballot scanners. The County is following an established process for bi-partisan teams to re-create the impacted ballots to make sure every eligible vote is validated and counted. This process occurs during every election as there are various reasons ballots are sometimes unable to be scanned.
The County estimates that approximately 23,000 ballots are affected by these two issues.