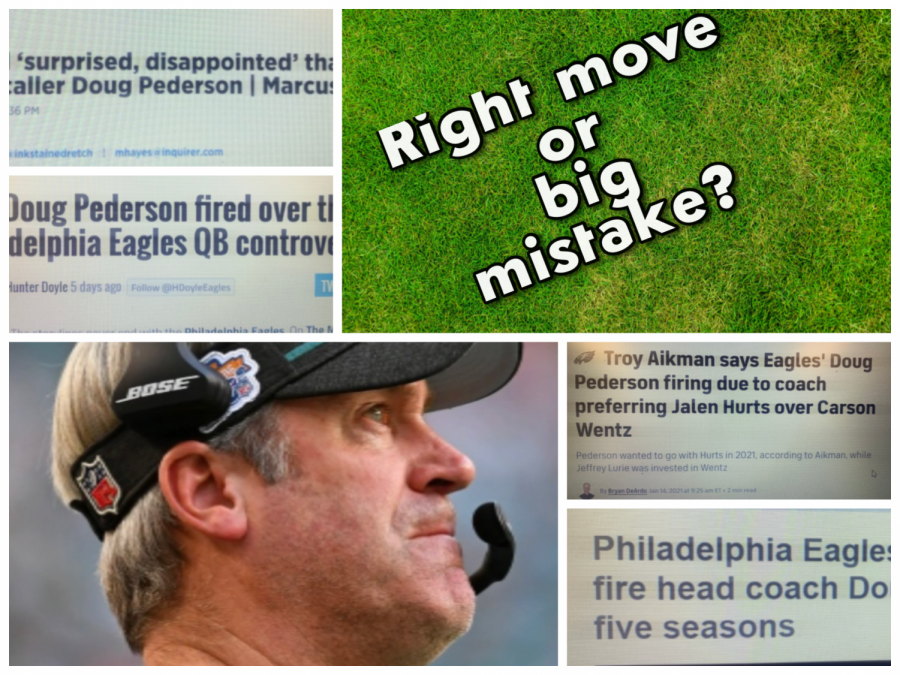 Doug Pederson- Great call or flag on the play?

Firing Pederson was a big mistake

Winning a Super Bowl in Philadelphia is worthless.

The firing of Doug Pederson last Monday proved that and the aftermath showed how all of the Eagles problems started with everyone other than Doug.

When addressing how the Eagles released the coach of the past 5 seasons, there are a lot of words that come to mind, but the main one is – unprofessional.  The Eagles had vital information about the current state of Pederson’s job leaked with many speculating that owner Jeffrie Lurie or GM Howie Roseman were the source for these leaks. Pederson’s plans for a new coaching staff were also leaked just hours before he was dismissed, which also made him look even worse and justified the decision more in some fans’ minds. Any good organization, which the Eagles are not, would have immediately shut down any leakers or reports about those things, but they just kept coming.

After it was made public that Lurie had decided to fire Pederson, a press conference was held and the Eagles did nothing besides embarrass themselves. Lurie made the statement that “Pederson did not deserve to be fired”. Then why was he fired? Lurie decided to basically publicly say that he made the wrong decision, only a day later. That really makes no sense, but neither do many of the Eagles management decisions.

Lurie also talked about how other teams just picked better players ahead of them resulting in the draft misses…ok. In 2019, the Eagles drafted J.J. Arcega-Whiteside 57th overall. He has 12 catches, 227 yards, and 1 receiving touchdown at this moment in his career. DK Metcalf, who was drafted 64th overall that year, is currently a top 10 receiver in the league with 141 catches, 2,203 receiving yards, and 17 touchdowns. One year later the Eagles picked Jalen Reagor out of TCU over Justin Jefferson. Jefferson went on to break Randy Moss’ franchise record for rookie receiving yards in Minnesota and is the Rookie of the Year favorite. So how does Lurie explain that? All of our draft picks fall directly on Roseman and he is notoriously one of the worst drafters in NFL history, but he gets no blame.

One of the most hypocritical things I heard in this press conference was Lurie talking about how he won’t decide whether Carson Wentz will be back with the team in 2021 or not. It came out that this QB disagreement between Lurie and Pederson was what led to his firing. So he is making the decision.

It’s extremely rare to find a Super Bowl winning head coach. Only 33 people have ever won a Super Bowl as a head coach and Doug is one of them. When given the right offense and control of how he wants to do things, he took this team to the top of the mountain. Doug is third all-time in winning percentage for an Eagles Head Coach.

A lot of voices around the league have been saying that the Eagles HC vacancy is one of the least attractive around the league for a reason. The management scapegoated the only person to bring them some jewelry. Any coach is going to have to deal with a power struggle with Lurie and be blamed for the struggle when the real problem is sitting in the GM office.

For Eagles, it simply was time to move on

Doug Pederson will have mine and all Eagles fans’ respect for life for bringing the city their first Lombardi trophy, but it was time for Doug to go.

Just 3 years after Doug Pederson led an undermanned team to the Eagles’ first Super Bowl win, he has been fired. Making the playoffs 3 of their last 4 years under his leadership, the state of the team looked great until this season. It was a rather unceremonious firing, as rumors were kicked up in the weeks leading up to his dismissal.

Pederson had lost the locker room. After the season finale, reports started swirling that multiple players had approached him aggressively, needing to be held back by other teammates. The fact that this was even a report is concerning, as there should never be these types of rumors going around if you’re the head coach of a football team. With the Wentz/Hurts debate, the locker room was essentially split in two, which is yet another sign that Pederson had lost control of his locker room and was struggling to gain it back.

Since the 2017 season, the team has steadily declined year by year. The quality of play looked worse, results on the field looked worse, and standings looked even worse. The Eagles had one of the worst drop offs for a championship defending team in league history. The team was one of the most feared in the 2017 season, and in just one year with little change to the roster, the team declined notably. The failure of Pederson to hire the right assistants and be internally vocal with the types of players he wanted just showed a general disinterest in the job, which was also backed up by some reports.

Philosophically, Pederson and owner Jeffery Lurie did not see eye to eye in terms of the future. Pederson is still a good coach, who will be sure to find some success at another team. The Eagles just need a fresh start. A head coach who will bring a new culture to the team, coach Carson Wentz and push him to be the MVP caliber player he was in 2017. A coach who pushes his players to be the best and make them work hard. Just a fresh face in general.

The Eagles’ fan base thanks you, Doug, for everything, but it is time to move on.