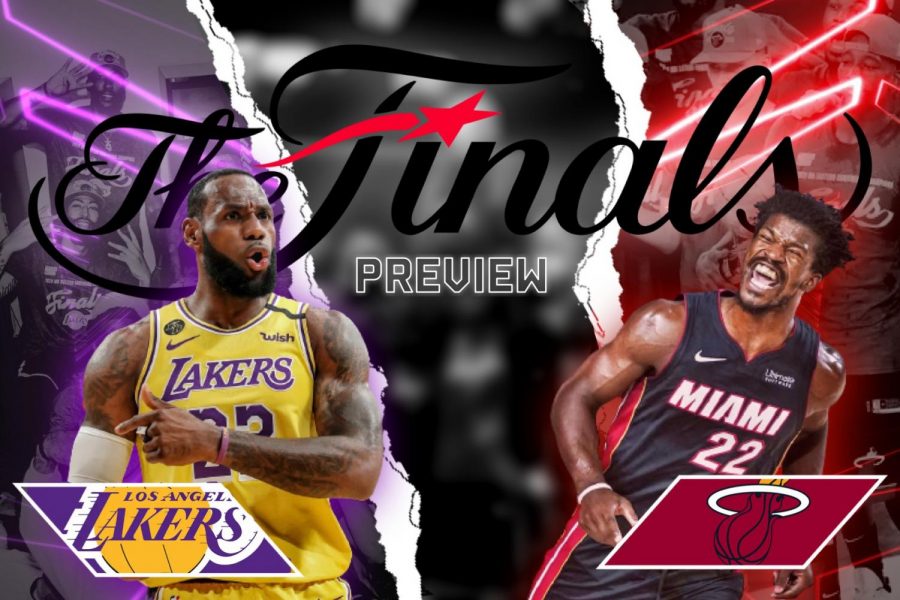 ORLANDO – The moment the entire basketball world has been waiting for, the NBA Finals, are finally here. This will be like no other finals ever. No fans in the stands, no home court advantages…just ball.

The fearless Jimmy Butler leads his group of underdogs and misfits, looking to cement themselves in NBA history against the all-powerful Lebron James and his Lakers squad. Meanwhile, Frank Vogel and Erik Spoelstra meet again in a high-stakes playoff duo, except this time, it’s for NBA gold. Both teams breezed through the playoffs, going 12-3, with neither of them looking back.

The Los Angeles Lakers simply dominated the Western Conference, winning each series 4-1, with the second-best offensive rating, coincided with the best field goal percentage and the fifth-best defensive rating during their run. The phenomenal level of play is led by two All NBA First team players, Lebron James and Anthony Davis. Being favorites all year round, they have reached the final proving grounds against the team where Lebron won his first two rings. “Doing it for Kobe” is their mantra, ignited by the inspirational figure to win it all; and they have all the talent to do it.

On paper, the Miami Heat are not as good, but their hearts are unmatched. The Heat are a formidable opponent that was often overlooked. Getting the 5th seed, the entire NBA has slept on them not only during the regular season, not only at the start of the NBA bubble, but at every moment of the season thus far. The leadership of Jimmy Butler has been so effective, and so many players have stepped up their game to a new level beyond imagination. When a team’s leading scorer is not the player most in the news, the team shows a sign of unity more than usual. This is not by mistake. Things are different in Miami; it’s not for the faint of heart. The Miami Heat embody a winning culture like none other.

Taking a look at the key matchups, we see the heart vs. talent battle come to true fruition.

The Heats’ Goran Dragic and Lakers’ Kentavious Caldwell-Pope face off at the point guard spots. Dragic has simply been a surprise all post-season. Before the playoffs, Dragic was unsure if he was even going to start, and now he’s having one of the best stretches of his career and is leading the Heat in playoff scoring; this is going largely unknown. He has 20.9 PPG (career-high), while shooting splits 45-36-81. Gordan has not gotten close to these numbers ever since 2016. KCP, however, comes in averaging 9.9 PPG on 44-42-77 shooting splits. While he is not necessarily the true point guard of this team, his role on the court in defensive matchups and has a substantial role in offensive opportunity making, with the 3rd best offensive rating amongst all players in the Finals. Caldwell-Pope has done only okay for the Lakers though, and has been streaky throughout the playoffs, whereas Dragic has only seemed to get better.

While the battle of the guards is settled with ease, the matchup at SF shows us an obvious answer, but a close fight. Lebron James and Jimmy Butler come in as the two main stars for their respective teams. Lebron joined an elite club with his game 6 victory over the Denver Nuggets and became the 4th player in NBA history to reach 10 finals. That number alone is more than 27 NBA franchises.

The dominance of Lebron is acknowledged by Butler, saying “You have to go through [Lebron James] at 26, at 36, and probably at 49.” But he has no fear and believes that “If anybody is up to the task, the Miami Heat are.”

That’s what separates the two individuals: greatness and glory versus grit and heart. Butler will do his best to stop Lebron offensively, but almost no one ever has managed to do so. Butler’s own offensive game will not be enough to outweigh that either.

The most important matchup to watch, however, is Bam Adebayo and Anthony Davis. Adebayo is the one player who benefited most from this new era of the Heat and got better in every statistical category. Bam is faster than most centers, and his athletic ability is better than perceived. He landed on the All-Defensive 2nd team and it was shown to be clutch, such as moments when he blocked Jayson Tatum’s game winning shot in game one of the Eastern Conference Finals. Anthony Davis proves to be his most difficult opponent this run so far and guarding him is no easy task. The 3-level scoring machine is the best big man in the league. His performance has been top-notch and arguably the best on the team so far, scoring 28.7 PPG while shooting 57.1% in the playoffs. But Bam is the best defensive player he is facing by far. This matchup will have the most impact on the series.

Key X-Factors for each team:

The Lakers X-factor is not Lebron. Fans know he will sustain a level of play, and improve with each bout. It’s the aforementioned Anthony Davis. His play will determine the outcome of the series. The Lakers bench does not run as deep as the Heats. Sparks have been shown by multiple players on the Heat bench, yet the Lakers have yet to find a 3rd-and-reliable scorer. Davis has the weight of all of the Lakers on him, and needs to step his game up even more before his dreams fall short of reality.

The Heats X-factor is Tyler Herro. Herro has had a complete boom in the playoffs and showed the world what he is capable of. Once he gets hot, he does not miss many shots. His swagger and his three-point clutch ability have let the Heat pull away late in many games. If he stays cold, they’ll more than likely lose because Herro opens the floor and creates space for playmaking simply by his on-court presence. Without it, it is hard to see success moving the ball and scoring when the likes of Butler and Adebayo are off the floor.

The contest will be close, and amongst many analysts, the Lakers appear to be the favorites. Lebron and Davis have been labeled as an unstoppable duo. No one is going to be able to guard them. However, the Heats’ inability to give up on a game and overall perseverance will carry them through an upset win over the Lakers. Butler’s leadership has been the best in the NBA, and the Miami culture is so strong, it will portray the famous words of head coach Tim Nolke: “Hard work beats talent when talent doesn’t work hard.”