Titans pierce through Knights in Overtime thriller. Next stop, playoffs. 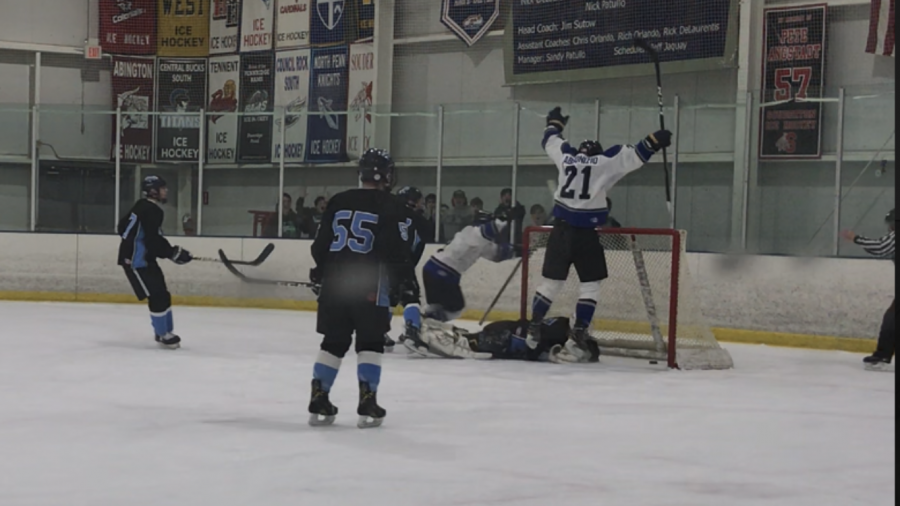 HATFIELD- “A North Penn and CB South [match] with two powerhouse teams. For us to play our last game of the regular season with first place on the line…yeah I guess the guy doing the schedule for the season did a pretty good job,” expressed North Penn Knight’s head coach, Kevin Vaitis. To say this game, which was set on deciding who would stand at the top of the AA Flyers Cup Tournament bracket, was a thriller, would be an understatement.

The North Penn Knights (13-2-0) clashed with the Central Bucks South Titans(14-0-1) at Hatfield Ice Thursday night. A square off where the home team prevailed, wrapping up the regular season for both ice hockey squads, ended in a 3-2 overtime victory in favor of the Titans.

“[The atmosphere in the rink] is everything you could ask for. We all knew coming into [the game] that it was going to be our biggest game of the season and the atmosphere makes it seem like it’s just that much more important,” said Knights assistant captain, Josh Kaufhold.

From the very first puck drop, the rivalry between the Knights and Titans, a match up given the title as the battle for the County Line Cup, was felt by the players throughout each puck possession, quite literally. Traded checks along the glass and open ice hits made up most of the first period play as both respective offenses worked to get their scoring attempts going, but to no avail.

“We had a game plan coming into the game and everything seemed to be working and we just had to stick to the game plan and be patient. The puck was gonna come our way and it’s playoff hockey. Coming into the game, I told the boys tonight was going to be a playoff game, you have to treat it like that. The energy level is going to pick up and that’s what we have to look forward to the next couple of weeks with playoffs and the Flyers Cup,” stated coach Vaitis.

A North Penn Luke Van Why poke check to break up a 2-1 chance for the Titans and a helmet ringing hit laid on CB South’s, Daniel Kvecher, by Knights senior assistant captain, Tommy Boyle, highlighted the defensive effort for the Knights as they deflected away 9 total shots put on Knights goaltender, Nick Ebbinghaus in net throughout the first period. On the other end of the ice, the Titans defense was just as sound with Kvecher’s efforts to respond to the early game hit he received from Boyle with two occasions of breaking up rebound opportunities with his stick on Knights offensive opportunities. In addition to the lock down defense in front of the net, Central Bucks South goalie, Mason Moyer, stood just as tall against North Penn’s early offense, batting away seven of seven shots he received in the first period. It was 6:55 minutes of scoreless hockey till one team broke the scoreboard, and after defeating the Knight’s soundly earlier this season with a 5-1 final score, the Titans seemed to pick up right where they left off.

The Titan’s hoisted a 1-0 lead heading into the 2nd period following the first goal on the night off the stick of Ryan Gingras from the blue line. However, this close score and sound defensive effort couldn’t prevail for long as once the 2nd period got underway, both teams got their turns at lighting the lamp.

“Everyone got running on all cylinders and we found out how to really play as a team cohesively  [from the start.] Physical play early on was necessary in big games like this one. It gets us going and in the game more [from the first period on],”stated senior captain, Tyler Greenstein.

The Titan’s reinforced their early lead with another back of the net connection at 15:03 in the 2nd period. Their captain, Colin Abbonizio, led the way with an unassisted goal, banking the puck in past Ebbingahus off of his own rebound. While one captain stepped up however, the other captain felt it was the time to step up too, and did so in a hurry. North Penn’s captain, Tyler Greenstein, found Kaufhold for a saucer pass placed back door for a one timer sent top shelf on Moyer in net. A sizzler which put the Knights on the board for the first time on the night, bringing the deficit back to one.

“I realized I had a lot of space and the guy across ice left Josh [Kaufhold] kinda wide open. I was able to send a saucer [pass] over [the defender’s stick] and Josh finished,”said Greenstein.

“[The goal] felt awesome to put us on the board. On the power play we really try and work it back door to myself and Tyler had a really great pass to hit me back door,” stated Kaufhold.

Following the final horn of the 2nd period, both teams traded a goal a piece, a 2-1 lead in favor of the Titans. This one goal lead meant little however, with a whole period to go. A final period which held one back of the net connection, and the biggest hits on the night between both top ranked teams in the state.

Skating a man down due to a CB South power play seemed to mean little to North Penn sophomore, Tony Tuozzo, who’s aggressive play style cashed in when the Knights needed it most.

“I was just trying to pressure the puck, didn’t really plan to bank in the goal there, but I found the puck on my stick and put it in the back of the net. Coach Vaitis talked to us about the skilled guys on their team and how we had to defend them and out the body on them. We knew they would have a lot of aggression so we tried to up the ante and take it on them,” expressed Tuozzo.

Picking up the loose puck deep in the Titan’s territory, Tuozzo found himself on the doorstep of Moyer who was caught on the far side of his crease in net. With the puck on his stick and a rare opportunity to tally up a goal while his team was in the middle of killing off a penalty and shorthanded, it wasn’t the first shot, or the second, but the third straight shot to beat the pads of Moyer in net for the Titans. A third period goal was put in which put the contest at a tie score at 2-2. A score which stayed as is for the rest of regulation.

Fatigue settling in for the players, packed student sections calling out their respective school’s name with a roar of chants, and the locked in mentality of the players seeking that one bounce of the puck to fall your way in order to hoist your team to a #1 rank in the 2A class of Pennsylvania Flyers Cup hockey; overtime at Hatfield Ice between the Knights and Titans was a glimpse into true playoff hockey these team’s will dive into next week. An exceptional way to cap off a regular season was fast paced play and intense physicality which unfolded on the ice in the Thursday night face off between two rivals. And at the end of the night, that one bounce fell in favor of the Titans courtesy of a Daniel Kvecher OT goal, scoring off of a rebound once again.

“I told the guys [postgame] to take this as the last game we lose all season. We gotta come out from here like it could be our last. That’s how it’s going to be for the next three weeks and after tonight’s game, I think they showed they got the heart, got the energy, and it’s just a matter of making sure we keep that up in playoffs,” expressed coach Vaitis.

An undefeated season for the Central Bucks South and a multi-game win streak for North Penn, snapped at nine by the Titans, send both teams into the Flyers Cup Tournament with many positives and momentum to build off of. With many games up next on each of the schedule that are going to mean a lot more with playoff hockey rolling in with the new month of March, hindsights are set on a trip to the championship, and one last meeting on the ice between both of these hockey teams. A possibility in the near future.

“We are thinking of playing for our seniors, playing for our coach, everybody who is out there for North Penn and every alumni. We are a really good team and we can beat this team, and that’s what’s going to happen in playoffs,” concluded Ebbinghaus.

The Knight’s step back on the ice next to kick off their postseason play in the Flyers Cup Tournament next Monday night. Puck drop set for 9 p.m. against the Falcons of Pennsbury to open playoff hockey in 2020.

Be sure to follow @NP Ice Hockey on Twitter for more team and season information on North Penn Knights 2019-2020 ice hockey.