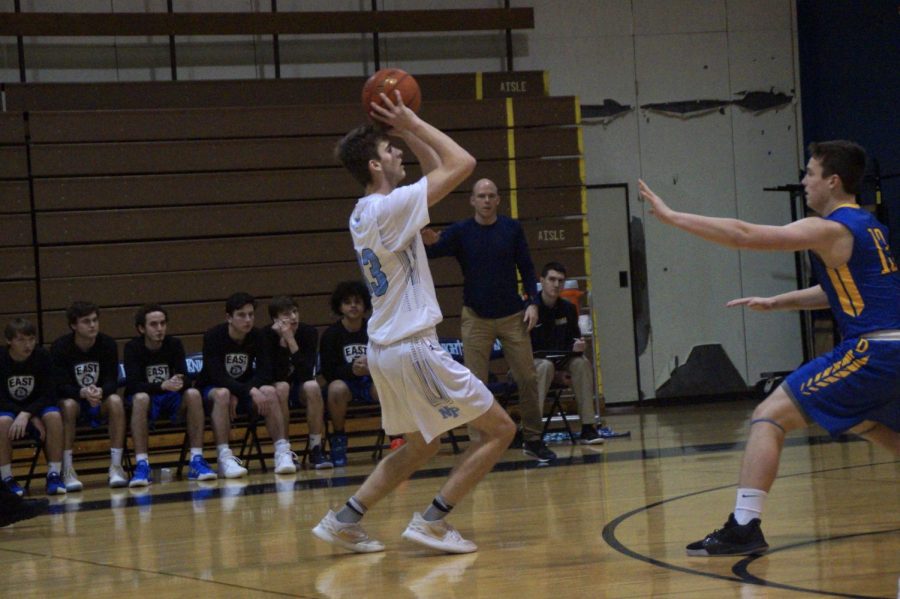 The Knights fought hard, as at one point they trailed the Cougars by double digits but then eventually held a lead.  In the end it was close but no cigar with some clutch late game shooting coming from the Cougars.

The North Penn Knights (6-12) lost to the Downingtown East Cougars (9-8) 50-42 in a Saturday afternoon game at the North Penn High School Gymnasium.

Andrew King hit the first shot of the game with a three-pointer.  The Cougars went on a 7-2 run in the first 1:54 of the game and took a commanding 19-11 lead into the second quarter.  All 11 of the Knights points came from junior Rob Carangi.

“I thought maybe it was my turn to try and get a couple of points up and help the team, so in the second quarter, draw more attention to myself and open it up for teammates later,” Carangi said about his first quarter.

The Cougars got the lead to double digits but the Knights battled back as with 1:31 left in the first half, Josh Jones made a three to bring the game to within 1, 25-24.  Then the Knights tied it at 26, as Carangi went baseline and scored a layup.  The score at halftime was 26-26.

“We got stops.  We were able to score in transition and early offense and we started off pretty well in the third quarter and we just went into a dry spell,” Head Coach John Conrad said.

To open the 3rd quarter, King and Matt Swanson went at it in the paint with buckets on each end to keep the score tied at 28.  With 5:47 left in the third quarter, Swanson muscled in a layup as he was fouled.  His free throw was good and the Knights had a 31-28 lead.  With 4:14 left in the quarter, David Owsik made a three to tie the game at 31.  Then Grant Umberger scored a layup, assisted by King, to retake the lead for the Cougars.  At the end of the 3rd, the Cougars led 35-33.

With 6:52 left in the game, Kolby Barrow made a three, assisted by Joe Larkins, to tie the game at 36.  Jones followed that with a three on the Knights next possession to give North Penn a 39-36 lead.  With 5:42 left in the game, Owsik went to foul line and made three free throws to tie the game up at 39.  Umberger then got a bucket to give the Cougars a 41-39 lead. Owsik put the finishing touches on the game with 2 three-pointers to extend East’s lead to 47-39 with a 1:10 left in the game.

The Knights are back on the court at Quakertown Tuesday at 7:00.  North Penn won this matchup earlier in the season 67-38 with Josh Jones scoring a career high 28 points.

“We’re in a do or die situation now if we want to make playoffs so, we’ll try and get better on Monday and see what happens Tuesday,” Coach Conrad said.