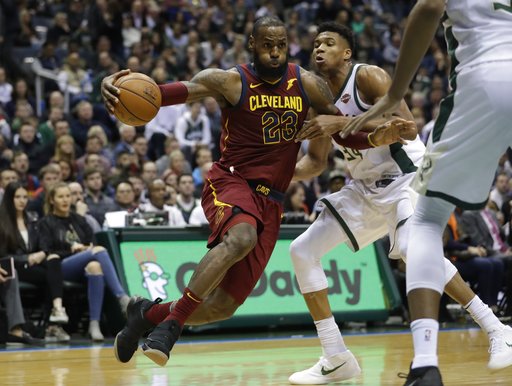 NBA All-Star Weekend is right around the corner but before the festivities start, fans will be treated to an event that will have all 2K gamers and fantasy basketball participants, laser focused on their television screens.  Last year, captains, LeBron James and Stephen Curry, picked their all-star rosters behind closed doors but this year, the All-Star draft will be televised for all NBA fans to watch.  We, Erik Jesberger and I, couldn’t help but to make our very own All-Star game mock draft.

As a LeBron fan, I, Prasham Jobanputra, will take control of Team LeBron while Erik will be the GM of Team Giannis.  Team LeBron will receive the first pick since LeBron was the leading vote-getter and then picks will alternate.  The starters will be chosen first and then we’ll start to choose the reserves.

LeBron picked him last year when there was still a little bit of awkwardness between the two but since then, Kyrie has apologized to LeBron for not appreciating his leadership as Cleveland teammates and now the two are on good terms.  I mean, LeBron posted a video of him singing on his Instagram story and tagged Kyrie.  This rekindled friendship even has rumors starting about the two former teammates reuniting in L.A. this summer as Kyrie enters free agency.  And if LeBron picks Kyrie, the rumors will keep filing in.

He may be quiet, but Kawhi is one of the best two-way players ever and he’s in his final year of his contract.  It’s no secret the Lakers and LeBron will be major contenders to sign Leonard in the offseason as Leonard has expressed interest in playing in his hometown of L.A.  By picking Kawhi, LeBron can perhaps win over Kawhi and help his recruitment to the Lakers.

As last year’s MVP of the league, the man known for the beard is a significant addition to the roster. Backed up by his 36.5 points per game average this season and 6 triple-doubles, Harden stands as a behind the arch threat to LeBron’s all-star team in the matchup.

The only reason this pick doesn’t come earlier is because of Durant’s comments about LeBron when he described LeBron having a toxic environment around him.  But at the end of the day, Durant is one of top players in the NBA and if he’s still available, LeBron almost has no choice but to choose him.

In his 7th all-star game selection, PG stands as a viable acquisition to Team Giannis and his selection is in no doubt made to bring multiple assists, steals and of course, three point range with about 50% shooting from behind the arc and 28 points per game this season.

Embiid is the only center that was chosen to start the All-Star Game so I had to pick him to add rim protection and a reliable rebounder.  Also, Embiid in the pick-and-roll with LeBron is a serious threat that would be very entertaining to watch with the flashy passes and alley-oops in the All-Star Game.

Standing as a top three-point guard in the league, Kemba is a well deserved all-star addition. who will demonstrate his exceptional offensive scoring ability as well as assisting the basketball, as he averages above 5 assists per game this season.

Anthony Davis has made it very clear that he wants out of New Orleans and would be interested in signing a long-term contract if he gets traded to the Lakers.  After a game between the Lakers and Pelicans, Davis and LeBron went out for dinner and LeBron has spoken about wanting to play with Davis.  There is no way LeBron let’s a chance to enhance the recruitment of Davis slip away.

A 7-foot threat in the paint, Towns stands as a viable pick for both sides of the ball where his 20+ points per game average is backed by a 12.2 rebound average as crashes both the offensive and defensive glass, which are viable to any team needing a big man and wanting those second chance points.

LeBron and Simmons have been extremely close since Simmons entered the league and last year LeBron even called Simmons the “Young King” on an Instagram post.  With the similar play styles, LeBron should pick Simmons as a fun way to continue mentoring Simmons.

Standing in the top ten of players with the highest points per game this season, Lillard brings a lot of offensive skills to the All-Star game.  With a 45% field goal average and 26.2 point per game, it’s Lillard’s 6.3 assists and 4.5 rebounds per game that make him stand out as a reliable pick up on the squad.

Basketball brothers for life, LeBron and Wade.  They were drafted in the same year, competed against each other, and won two championships together.  With this being Wade’s last All-Star Game and the last chance for the two to play alongside each other, LeBron will almost for sure pick Wade for one last dance.

With the chemistry with fellow splash brother Steph Curry, Klay would be a lethal asset to the squad where Curry and himself will both serve as dual threats from behind the arc and bring their big stage experience from The Finals to the squad.  Klay also brings a 46.5% field goal percentage and 20+ points per game to his arsenal in the All-Star square off.

Westbrook is perhaps the most explosive player in basketball right now and fills up the stat sheet on a nightly basis.  With Kyrie starting at point guard, this pick allows Westbrook to run the point for the second unit.

Posting up at 7’0″, Nikola serves as a great selection on either team towards the middle part of the draft. While his scoring may not be electric, he still holds a 20+ points per game and his 12 rebounds per game average make him a threat on the boards and around the rim.

You can never have too much shooting and we all know LeBron loves to kick out to spot-up shooters as defenses collapse towards him.  With Klay Thompson already off the board, Beal is the next best option to add that premier perimeter shooting threat.

Serving as just a complete, all around option stats wise, Blake gets ready to suit up for his sixth all star game while also bringing his 26.1 points per game and 8 rebounds per game to the matchup.

There are not many players like Jokić.  A 7-footer who can play down low but also pass like a point guard.  Jokić gives you another big man to help on defense, as Jokić’s defense has improved this year.  But he won’t be down low in the post the whole time on offense which will create lanes for the finishers like LeBron, Westbrook, and Kyrie.

Being everyday teammates with the all-star team captain definitely builds chemistry within the all-star squad, and as for Middleton’s on the court performance, he obtains a well rounded stat sheet on the season with an average of 17.3 points per game.

LeBron will probably never forget his disappointing performance in the 2011 NBA finals against Dirk Nowitzki’s Mavericks.  But with this possibly being Nowitzki’s last All-Star Game and season, I think LeBron will pay his respects to the future first ballot hall of famer, and draft Nowitzki so he can play alongside him.

With an average of 19.6 points per game, it’s Russell’s assists (6.4 assists per game), that made him the replacement for Victor Oladipo after his injury and was removed from the all-star game.

With already four big men on the roster, Alridge wasn’t an option.  Lowry can pile onto his assist numbers every night and adds depth at the point guard position.

Standing as the last pick in our mock draft, Aldridge just lacks the points per game that other all-stars possess.  However his rebounding and presence in the paint keep him as a viable option among picks in the later rounds.

Tune into TNT at 7:00 p.m. to watch the live draft between LeBron and Giannis.