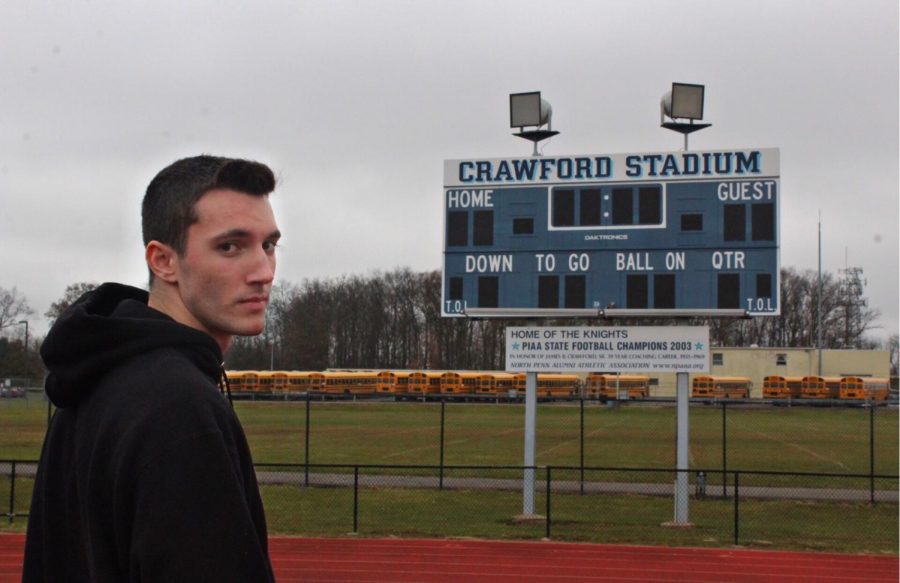 Senior Nick Intrieri's football season came to an end much earlier than he expected.

TOWAMENCIN- It was opening night for the 2018 North Penn Knights football team as they were on the road against the Neshaminy Redskins.  The opening kickoff was sent away and senior Nick Intrieri was running down field when all of the sudden, his season was over.

“I was just running down field and I went to change directions and I stepped on my left foot wrong and my knee just gave out.  I just fell right to the ground,” Intrieri recalled.

Intrieri thought it was only a sprain but six weeks later, an MRI revealed a torn ACL and a part of his meniscus was off.

“I was doing a lot of rehab for six weeks leading up to [the MRI].  I was still looking to come back, but I found out not gonna happen,” Intrieri explained.

No chance of a return for the tight end/linebacker.  After a junior season that showed much promise for Intrieri, he would not be able to help his team in between the sidelines for the remainder of the season.

“I was mad, can’t even say I was upset.  I was more mad than upset but I once I started to cool down I was pretty upset about it,” Intrieri said.

The Knights would go on to have a perfect regular season with Intrieri unfortunately watching from the sideline.

“It was tough going to the games on Friday nights, standing there not being able to help out.  But those are all my best friends so I was just happy to see them winning and having a good time…I think we did great.  There was a lot of people in the beginning of the season that didn’t think we would do good at all and I think we proved a lot of people wrong, went undefeated and took it all the way to Coatesville which was obviously a tough team,” Intrieri stated.

As most high school sports do, the football team held a senior night to acknowledge each senior for their contribution to the North Penn football program.  Intrieri however, was not able to attend his own senior night.  Instead, he spent his night in a hospital repairing his knee.  A successful surgery for Intrieri was only the first step in his recovery process.

“[The surgery] was tough.  Well I mean, I wasn’t nervous for the surgery or anything.  I was just waiting to get it over with.  I wanted to get moving [and] get my knee back to normal.  But the first week post-surgery, that was tough.  It was a lot of pain the first couple weeks out.  That was the toughest time for sure,” Intrieri said.

As Intrieri described himself, the weeks following the surgery were tough but he had a group of his close ones help him and support him throughout the process.

“My mom, dad, brother, sister, and probably my girlfriend cause she was at the house everyday helping me,” Intrieri said while chuckling as he stated the people in his life that made the experience easier for him.

“I’m going [to rehab] two days a week, which kinda sucks not gonna lie, but it’s process, I have a full nine-month recovery,” Intrieri explained.

However, for Intrieri, his football career comes to an end and it’s on his own terms and he is happy with his decision.

“This is definitely, probably the end.  Changed a lot for me cause I was basing a lot off this football season but as soon I went down, I just totally forgot about that.  I don’t wanna get hurt again… I played for thirteen years so I mean can’t complain.  I had fun, met a lot of friends,” Intrieri said.

Intrieri’s story is not an uncommon one for athletes.  Many do suffer season ending surgeries.  But high school athletes have to look for the positives to come out of an unfortunate situation and learn from theses experiences so that they can win the game called life.

“Just gotta look on the bright side of things, be optimistic.  Just keep pushing every day, working hard rehabbing, just can’t give up cause once you give up your just gonna shut down and you’re not gonna be able to get back to where you were,” Intrieri said.