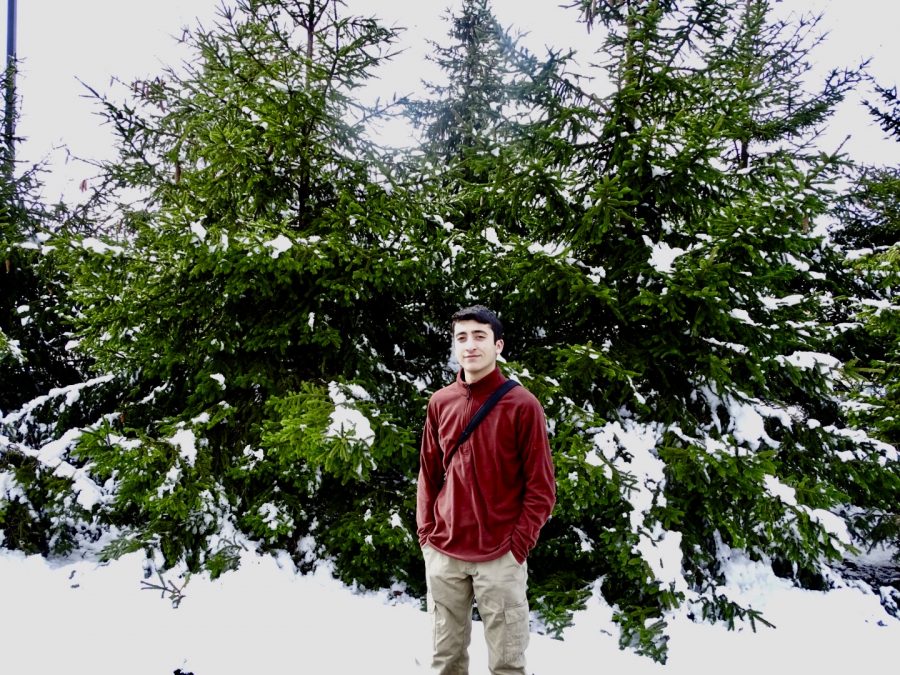 The things you are most passionate about often start off as mere hobbies, and over time, they develop into an increasingly larger impact on your life. Looking back, you can’t remember what day or maybe year you started to enjoy this one specific thing, but you knew it was going to be a part of your future. February 24, 2017 was the day of that rare occurrence for North Penn senior Pedro Miranda – the spark was instantaneous and not the least bit gradual.

“I became interested in ornithology, (the study of birds) and birding, on the exact date of February 24, 2017, when my dad dragged me out to Fells Road Field. . . there I saw a a Horned Lark. It’s about 8 inches, mostly beige with a black mustache, yellow chest, and black horns, which are just feathers that come up at the top of its head. It was just so weird-looking that I wanted to see what else was out there. I grabbed my dad‘s bird book and I was just skimming through, and it inspired me to go out and see as much as I could and understand it as best as I could,” explained Miranda.

It is already clear that he wants to wants to pursue a future in conservation. Whether he chooses to focus on ornithology or not, his passion for the outdoors will remain ubiquitous. This past summer gave Miranda a hint into his field.

“I want to be outside protecting the things that I love because a lot of people aren’t aware about it, so nobody’s going to notice when they’re gone until they know they’re gone,” exclaimed the North Penn senior.

Miranda was accepted into two major ornithology-based trips this summer centered around high school students who are looking to start a career in ornithology. The trips took place in the northern tip of Maine and at Cornell University. Both required an application, including their grades, gpa, and an essay, to be selected.

Wyncote Audubon granted Miranda a scholarship to Hog Island and Bore Stone in Maine to attend and later give a presentation there about his trip. 14 other students were selected to apply for the experience to go birding and learn from the experts.

“We went on a boat ride to Easter Egg Rock from Hog Island, which was an area with no residential Poppins, but they were brought back through an environmental project. They used dummy birds to coax them into re-breeding on the island again after they have been hunted into extinction in the 1800s. We took the boat ride around the island, and I saw hundreds of them and other species back on the Rock,” explained Miranda.

The trip to Cornell was part of an event called the Young Birders Event. They selected only 14 students nationally and 6 internationally to attend the world’s capital of ornithology. Leading scientists and researchers gave presentations about their work and engaged in intellectual conversations with the students. As a group, they went birding in Malta Zooma and other well-known locations in addition to visiting taxidermy labs.

“iI was just a fantastic experience – talking to people who are just as interested in the topics as I am and who see the world in the same lens that I do. They really show you a lot because there are not a lot of other places where you can go to learn about ornithology in that much depth,” reflets the North Penn senior.

Waking up at 5am on your days off doesn’t seem to interest many high schoolers, or even adults, but that is where a special bond between Miranda and his dad solidified. After a failed attempt to get his sister interested in birding, Miranda’s dad was close to giving up on passing the torch. But it was relit when Miranda stood, half asleep, in 30 degree weather, wondering why he let his dad wake him up so early on his day off. Finally, buried in warm clothes, he saw what he was missing.

“They call it a spark bird, that moment that lets off a series of other moments and questions. . .the birds that I thought were supposed to be in South America and other parts of the world were right in my backyard and I had no clue,” said Miranda. “My dad and I, we are constantly bouncing off information, looking at birds, seeing the differences between them. . . it is a learning process for the both of us.”

Miranda conveys his passion for the outside world noticeably, but how he incorporates it into his North Penn experience is striking.

“I am mostly involved with the Enact Club at North Penn. . .I am one of the two co-presidents. I joined Mr. Collier’s club in middle school, freshman year, and as I went to the high school the next year, Mr. Collier was also transferred to the high school the same year. He regained the club and I joined it and now I’ve been club president for the past two years,” stated Miranda.

As the president, he spends most of his time working on the Enact Area at North Penn, the wooded area between the parking lot and Snyder Field. They recently put a new trail in it and are working on adding birdhouses and native plants.

“Pedro has made a huge impact on the Enact Club here at North Penn High School.  He joined as a sophomore, and by his junior year, he was co-president, and continues to serve as co-president in his senior year as well. He brings great ideas, passion and tons of knowledge to every club meeting.  Other members are inspired by his love of birding, his knowledge about invasive species, and his positive attitude,” expressed North Penn science teacher and Enact Club advisor Mr. Collier.

In an attempt to bring together the club members and appreciate the world around them, Miranda helps coordinate field trips around this philosophy. They have attended several presentations, arboretums, and hiking trips.

“The club is still relatively new after the switch from Penndale to the high school, so I’m hoping to see it get bigger and see them take on bigger and bigger projects,” remarked Miranda.  “I hope one day I can come back and say that they’re doing a lot right now and that they are growing.”