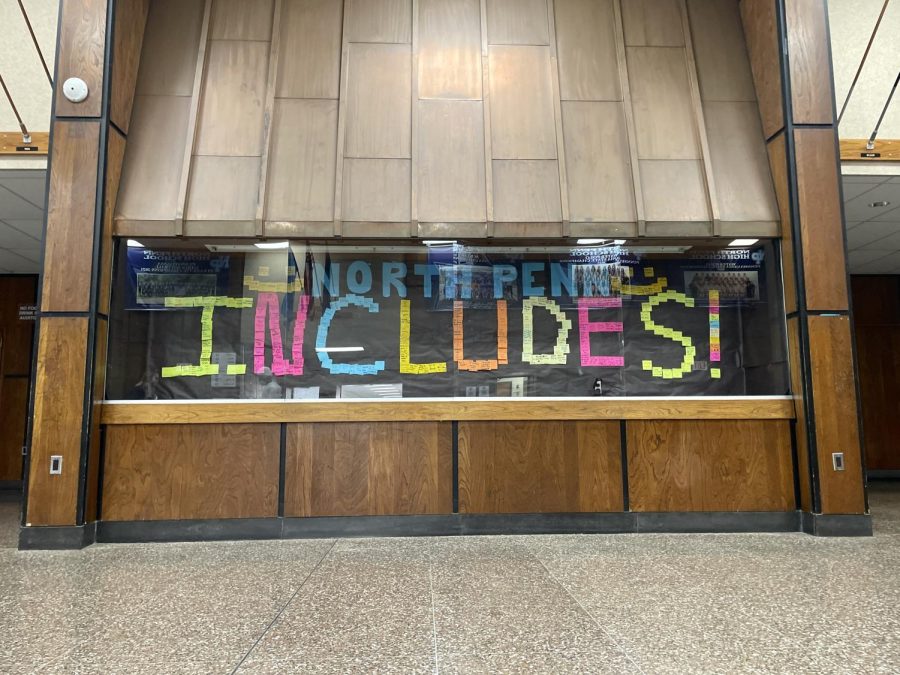 Located in the lobby, support for North Penn's students with disabilities can be seen. Everyday, teachers and students are learning more about each other and making efforts to become more inclusive.

North Penn High School never comes up short when it comes to tackling a cause.

Within the last few weeks, students have begun wearing blue wristbands that read “SPREAD THE WORD TO END THE WORD,” and adorning their Chromebooks with blue stickers that say the same. At first, it may be hard to recognize what this exactly means, but these students want others to ask. Once they do, they get to learn about how North Penn is fighting the stigma against autism and becoming more inclusive for their students with disabilities.

The goal of creating these opportunities is for everyone, not just one or two students.

Students can still get involved in these activities. There will be a trip to the zoo on April 26th. There is also a Special Olympics, track and field event for a day. This will be taking place at Souderton. Students with disabilities go to compete with the help of another student from North Penn. Rather than a staff member helping those who are competing students will help each other for a day of fun.

These activities will help students become more involved. Although difficult, it helps bring
awareness to school and spreads knowledge to those who lack it.

“I think it was a challenge to ask kids to sit at a table to talk to other kids about an issue, and to kind of put themselves out there so I’m proud of the kids who came out and did it,” Ahart added.

“I hope that the conversations get kids to come to the table. I’m hopeful that some of the people that we spoke with, that when they see somebody who’s sitting by themselves at lunch, they might go over and approach and ask them if they want to join friends. Or if they see somebody who’s in a wheelchair trying to move through these hallways, they might stop and actually let them go, rather than cut them off and keep going their way because they’re so consumed in their own world. We often don’t realize how even small actions can create chance,” Ahart said.

Despite this, there is still more to learn. Recently, a student came to Ahart and brought up a new concern: the Autism Speaks puzzle piece. Ahart noted that even she did not know until the North Penn student told her.

“I think the concerns about it are newer, and the word isn’t fully out yet, so it’s important we tell people the meaning behind it,” Ahart said.

The puzzle piece used to be a very common symbol for autism. However, this symbol can be up to someone’s interpretation. This symbol can be signifying to some that they have a “missing piece” or their puzzle is incomplete. This is simply not true, no one’s “puzzle” is incomplete. Although this symbol used to be seen more often, now people are realizing how it is hurting others. North Penn’s goal is for everyone to be aware and included.

Autism Speaks has been criticized for discriminating against those with Autism because its goals have been associated with trying to find ways to prevent autism rather than making life easier and more accepting for those people. They also have been criticized for wrongly blaming children with autism in regards to how they affect their parents’ lives. Essentially, many believe that the organization does the opposite of what they claim.

The new symbol proposed to both combat Autism Speaks’ puzzle piece and to lead the Autism rights movement is the rainbow-colored infinity symbol. The infinity sign, along with its colors, is meant to represent those who are both neurodivergent and neurotypical as one group of people and aims to show people that autism is both on a spectrum and a variation that occurs naturally (and not a disease that needs to be cured). With this new symbol, both people across the world and students at North Penn can better support those in their life and become more accepting of differences no matter how big or small. As Autism Awareness month comes to an end it is important to keep things like this in mind, and with the collaboration of students, better efforts are possible.