Stranger Things’ release date has the world turning upside down 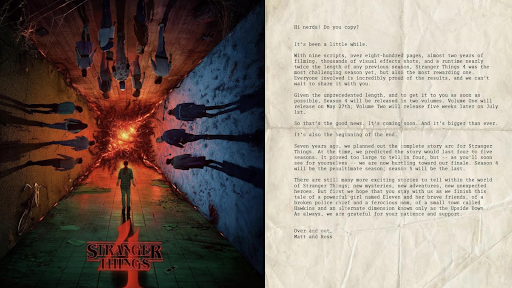 New posters and a letter from The Duffer Brothers on the fourth season of Stranger Things proves how much stranger the show is going to get.

The moment many fans have been waiting for is inching closer. The fourth season of Stranger Things is just weeks away, and it is going to be bigger and better than ever. The Duffer Brothers, who write, direct, and produce the show, released new information on the upcoming season.

“With nine scripts, over eight-hundred pages, almost two years of filming, thousands of visual effects shots, and a runtime nearly twice the length of any previous season, Stranger Things 4 was the most challenging season yet, but also the most rewarding one,” the Duffer Brothers, stated in an Instagram post regarding details on the fourth season.

Season one of the hit science-fiction series, Stranger Things, was first released on July 16, 2016. Since then, the show had two more seasons that have been watched all over the world and is a show everyone knows and loves. Winning major awards and having the actors’ faces on thousands of billboards left many wondering when the next season will come. Now, we finally have an answer.

“I think it’s really going to be worth the wait. Obviously, my hands are tied and I can’t say too much stuff but I’m very excited,” Joe Keery, who plays Steve Harrington on the show, expressed in an interview with Entertainment Tonight. “It’s something I really look forward to. Going back and seeing everybody and being presented with a new challenge each year when you get to read the scripts and see what’s kind of in store for you. I’ll never have another experience like it.”

With small teasers teetering throughout the past two years, the anticipation has been rising for the upcoming season. On February 17, 2022, the Duffer Brothers announced that season four of Stranger Things will be released in two parts. Volume One will be released on May 27, 2022, and five weeks later, Volume Two will be released on July 1, 2022. This news broke the internet, as the post that released this news has 3 million likes on Instagram as the word is still spreading around.

“So that’s the good news. It’s coming soon. And it’s bigger than ever,” The Duffer Brothers asserted.

Although this is the news that we have all been waiting for, we also learned new information about the future. There will officially be a season five. Yet, the Duffer Brothers broke the news that the fifth season will be the last. As sad as this is, fans still have lots to look forward to because the story isn’t over yet.

“We hope that you stay with us as we finish this tale of a powerful girl named Eleven and her brave friends, of a broken police chief and a ferocious mom, of a small town called Hawkins and an alternate dimension known only as the Upside Down,” the Duffer Brothers concluded.

The season we have waited three years for is finally coming to an arrival. All the predictions and theories will be soon confirmed on whether they are true or not, new characters will be released, and the show is ready to hit the charts once again. Grab your Eggo waffles and don’t get caught by the Demogorgon on the way because you are not going to want to miss this show that’s about to get a whole lot stranger.