Community the most important thing for this former homecoming queen 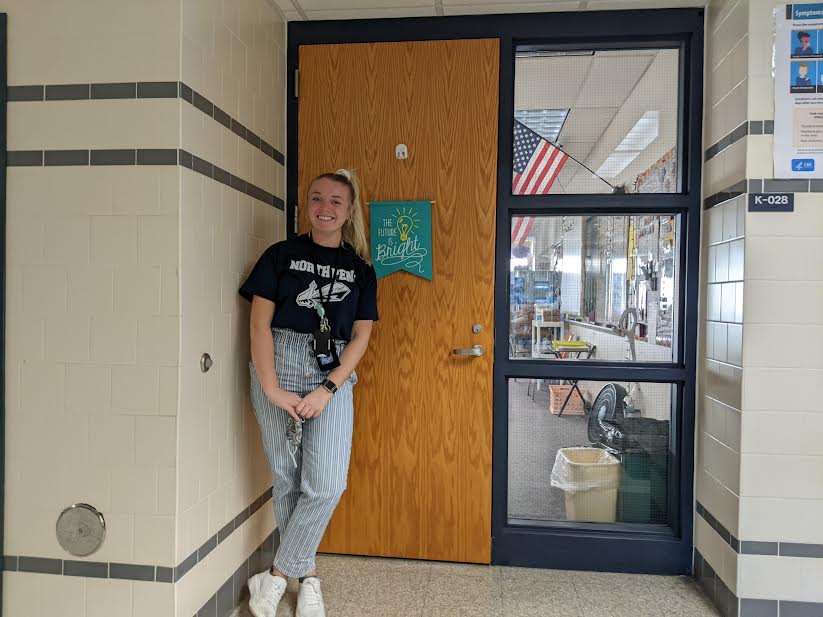 Nicole Garritt stands in front of her newest classroom, ready to teach.

Eight short years ago, Nicole Garritt was royalty. Today, she remains part of that royal family, but her role has changed quite a bit.

Formerly crowned homecoming queen, Nicole Garritt returned to North Penn, as a teacher in 2019. After graduating in 2014, Garritt went to Penn State University where she got her bachelor’s degree in Elementary Ed and a master’s degree in Special Education.

“I have family members with autism, and I also used to work at a summer camp with kids with disabilities,” Garritt described.

Garritt grew up in an environment where many of the people that she knew had disabilities or worked with the disabled. She took inspiration from this and decided to go into teaching students with disabilities. Notably, she was influenced by one of her colleagues, assistant principal Mrs. Megan Schoppe, who grew up right down the street from her. People like Schoppe are some of the reasons that Garritt decided to come back to North Penn.

“I was really amazed at her courage, strength, and kindness toward the kids, because the job she has is really difficult, and it’s really impressive for someone so young to do what she does,” Mrs. Schoppe said.

The two met when Garritt was in elementary school and had continued their friendship throughout the years, even up till now. Both are excited about their transition from old friends to co-workers.

Along with helping the community she grew up in, Garritt loves working with the people she had previously been in student/teacher relationships with. She’s excited to be able to see them open up to her as people, rather than superiors. Garritt’s high school experience was enjoyable, and now she’s glad to be working with her old teachers.

“Looking back, what I loved most about high school were the opportunities, like I could go see my friends after school, or go to dances and join clubs,” Garritt explained.

She misses the social opportunities that North Penn offers, and really enjoyed all the opportunities that helped prepare her for college. As a student Garritt was involved with softball, basketball, and SGA. She got to be in extracurriculars with the teachers she looked up to, and later came to work with.  She looked up to her teachers in high school, which set a good example of what she’d later pursue as a career. Most memorable from her high school days was when she was crowned homecoming queen.

“It was a weird type of support system in a way because everyone came together to make me feel good that day,” Garritt reminisced.

She smiled widely as she described the night. Earlier in the year, Garritt’s mother had passed, and her class joined to nominate her for the role of queen. It was an emotional moment for her because of the tough year, but her crowning showed how much her classmates cared for her. The experience uplifted Garritt, and made her feel good after the difficult time she was having. She won and regards it as one of her best memories of North Penn. High school was a very important experience for Garritt, which has shaped her into the person she is today.

“I love the sense of family of North Penn, and the support I feel from other teachers, and the feeling of community within the school,”

The North Penn community built Garritt up, through the support of her peers and her family. N matter what, this will always be Garritt’s home.

“I really loved my time here, and I’m super fortunate to have enjoyed going through high school because I know a lot of people can’t really say that,” Garrit said.