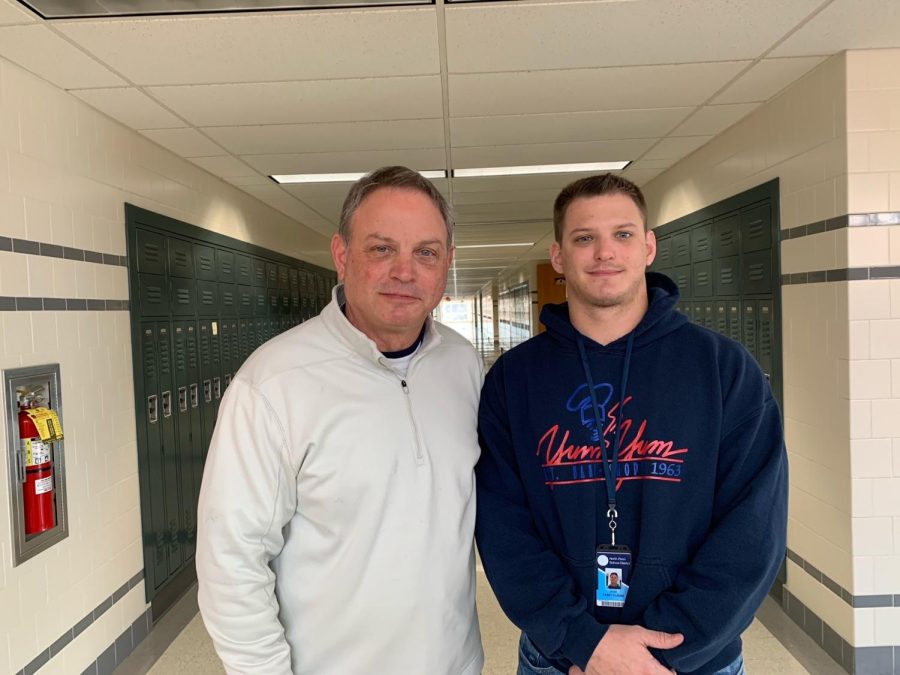 They graduated from the same high school, they both share a love for sports, they drive to the same building for work every morning, they have the same last name, and oddly enough they look very similar (age difference noted, of course).  I guess for the Clausses they took the saying “like father like son” pretty seriously.

Many people may know Mr. Keith Clauss who is a long time teacher at North Penn High School and who currently works as one of the Health and  Physical Education teachers. But not many may know the newcomer, his first born son, Mr. Casey Clauss, who has taken on the role as a teacher in the Special Education department at North Penn. While the father son duo may not be working in the same department, they still think it’s crazy to be working in the same building together.

“It didn’t really settle in at first because I had subbed here previously, but now being here everyday it is really cool to think about,” explained Casey.

Keith added on stating, “I didn’t think about him being here too much because we don’t really cross paths that often. The strangest thing though is probably the teachers and students because they will come up to me and be like, ‘I met your son’ and it takes you aback for a second.”

Casey also believes that working with his father has made his transition into the school much easier.

“The special education department has been great but it is also very comforting to know you have a family member here. I mean he has been working here forever and he knows everyone which has been really helpful because I don’t feel like I am out on my own” Casey explained. “I always have someone to lean on and if a question ever comes up I have someone to turn to. It is just a nice welcome back feeling”.

As Casey mentioned, being at North Penn is a “welcome back” since he graduated from North Penn in 2012. In fact, both Clausses get the privilege of saying they are back teaching at their alma mater. Keith is a proud graduate of the class of 1981.

“Since I graduated from here it is crazy to see everything just come full circle. Honestly that was just my first reaction when I found out I got the position to come here and teach” Casey admitted.

“It is more than full circle for me since I graduated from here and now I get to see my son working here” added Keith. “It’s a full circle and a half,” joked Casey.

Between all the similarities the two share, it can be even more confusing when you meet them and learn that they share more than just an alma mater and love for education.

“Every time someone meets Casey they tell me ‘you guys sound and look exactly alike’ and my response is always ‘really?’” laughed Keith.

“If you were to ask my mom, she calls us clones because we agree on everything. Most of my personality comes from him as well. Just the patience and being a people person all comes from him” said Casey.

Watching his father grow up, Casey always knew him as a teacher and watched Keith’s love for education grow over the years. As a young bright eyed kid, he always looked up to his father and feels that’s why he found his calling in education.

“My dad has been a teacher for as long as I can remember and my mom was in the navy. So teaching and the navy were the two things at the top of my list” Casey recalled. “In high school I did career studies senior year and I thought that was a fun experience but I never fully submerged myself into education until after college when I was subbing.”

As Casey continued to gain experiences in the education world he started to become more and more fond of atmosphere. His father was the one who truly helped him decide to pursue a full time career in teaching.

“Once I learned that I really enjoyed education from subbing I came home and talked to my dad and he helped me realize that this was just something that made sense and came natural and I was very passionate about it. Getting to work with the unique students that we have is just very rewarding,”Casey reflected.

“I think coaching came along with my father being in physical education as well as the joy I get from working with kids,” Casey said while discussing his role as an assistant varsity baseball coach at Souderton High School.

Clearly Keith has not only passed his genetics onto his son, but he has also passed along many of his passions. Casey feels that his father has taught him many of the things that have become part of his personality and morals towards life.

“My father has taught me how to have patience, passion, common sense, and how to put in hard work,” Casey said with a smile. “The one thing I have to say I truly adapted from him was how to be a good listener. Not many people like to listen these days and I think just being able to listen and hear someone else’s perspective has helped me go a long way. So I am grateful he has taught me that”.

Now that they are working in the same school, there is still so much more for Casey to learn from his father. But similarly, Keith can also learn some valuable things from his son.

“From Casey I have learned over the years how to have a lot of patience, and I think I can continue to learn how to have more patience” remarked Keith. “ Aside from that I think from watching him grow up I have learned that everyone finds their niche eventually. At first I had no idea what he was doing but now seeing how far he has come I can just say I am so proud of him.

“I think I can continue to learn from my dad not to take things too seriously,” added Casey. “Try to find the joy in everyday life and understand that not every day is going to be easy but still try to learn something new everyday”.

Seeing his son work with him is an adjustment for sure but it also makes him feel proud to see his son find joy in what he worked so hard for.

“It makes me feel old,” Keith laughed. “But I know all that I went through just to get here. And I know he worked very hard to get here, it is certainly not easy. So seeing him working here now I couldn’t be more proud of him as a father.”

“For Casey I hope he continues to be his patient and understanding self. I want him to learn about everyone in North Penn because it is such a unique place to be with such a diverse community” was Keith’s advice to Casey for his years as an educator.

Keith offered up one last piece of advice to his son which was, “Don’t wish your years away. You will miss them when they are gone.”