For Henry, teaching is the sweetest treat of them all 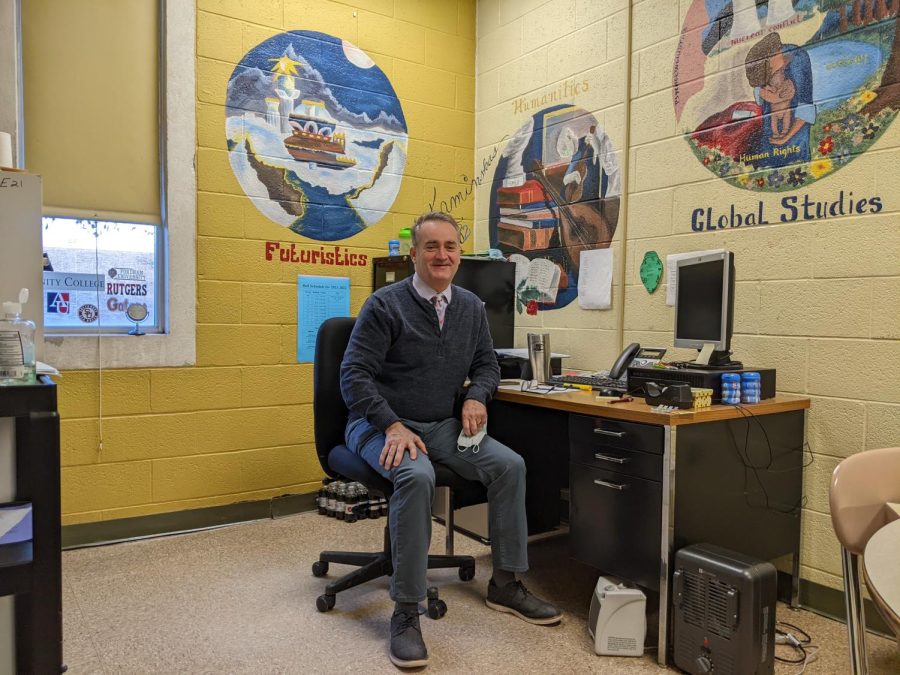 A passion for the study of people: Mr. Henry at his desk. His lifelong commitment to social studies and his students never ends.

Mr. Steven Henry may own an ice cream shop, but his love for his teaching is even sweeter. Henry started off high school in an all-boys school called Monsignor Bonner. Rather untraditionally, he began work as a union construction worker while going to night classes in Cabrini, which is a private Roman Catholic university in Randor Township. After graduating with a Business Administration degree, he continued to work as a construction worker, and later went back to Cabrini for a teaching degree. Soon after that, he was hired at Saint John Neumann.

“I thought I was going there to be a student teacher, but it turned out to be a full-time teaching position. I taught accounting for the first couple of years,” Henry said.

After teaching accounting for about three years, Henry moved on to being a social studies teacher at Saint John Neumann. After four more years, he was confronted with an enticing offer by an old friend.

“One of the people I worked with years ago, I happened to bump into him when I was teaching at Saint John Neumanns. He offered that I put my name in the public system, so I came up here and put a resume in, and lo and behold, I was hired,” Henry explained.

Before interacting with his old colleague, he hardly even knew that North Penn existed. Much to Henry’s surprise, he was hired in 2004. Since then, he’s been teaching social studies for the past eighteen years. This totals in a whopping twenty-five years of teaching. But, why did Henry choose social studies?

“My mom was the one who always knew what was going on and was aware. You know, not burying your head in the sand and thinking that nothing is going on outside your little neighborhood,” Henry said.

He regards his childhood with a smile. As a kid, Henry would join political activism clubs in school that were quite similar to how they are today, with radically opposing sides. He’d gather with fellow club members after school and debate upcoming elections. Other than elections, the main part of social studies that Henry is interested in, is geopolitics.

“It’s how things fit together, how countries interact with each other and how their issues are worked out. I’ve always found it interesting,” Henry said.

While he doesn’t actively advertise the fact that he also owns an ice cream place, occasionally, someone finds out. It’s a Bruster’s in Southern New Jersey, which Henry co-owns with his brother. He’s been managing finances, paying the bills, and sometimes going down and looking at the place since 2006. At first, he thought it would be a short, summertime venture, but was quickly proved wrong when owning the shop became a second full-time job.

However, he does love both of his jobs. He enjoys North Penn for the diversity of the students and the new experiences that each one brings into his classroom. As an ice cream store owner, a loving father, husband, and social studies teacher, he is fully committed to his passions.

“I love making connections with students, and seeing students take interest in social studies outside of school like I did.”