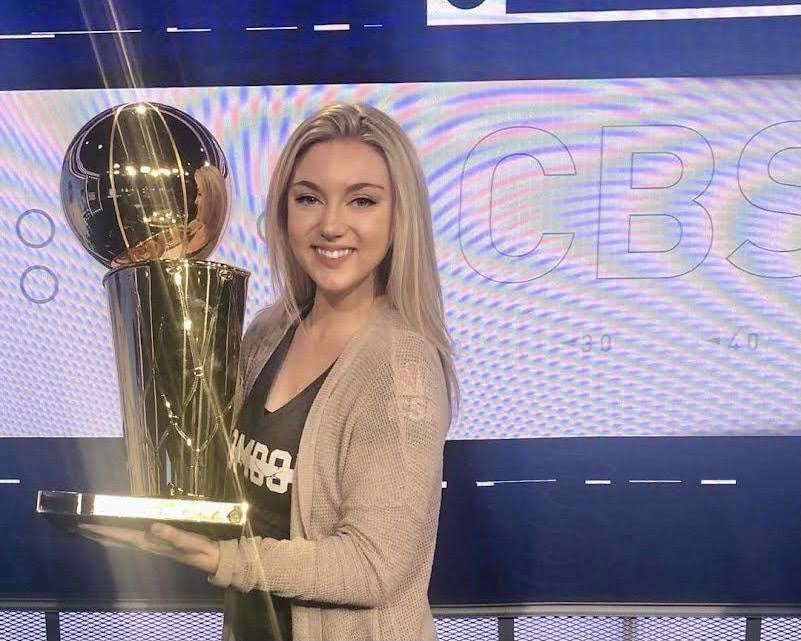 Milliron with the Larry O'Brien Trophy at CBS, her reporting home base.

Emily Milliron has turned her two passions of sports and journalism into a full time career. Not only does she get to be surrounded by it, getting an inside scoop on the most recent details, she works on it 24/7.

An alumni of the North Penn School High School, she originally wanted to become a sports reporter. She figured, ‘how could she get paid to talk about sports?’. While in high school she pursued an interest in the Knight Crier, NPTV, commentating play-by-play on sports games, even going into career study with NPTV.

After graduating from North Penn in 2013, Milliron pursued journalism at Temple University. There she could network and connect with people that had the same interests as her. While at Temple, she became an anchor and reporter for the student-run newscast, OwlSports Update, keeping the students and staff up to date on how the Owl’s finest athletes were doing.

“We covered all of Temple sports including football, which was doing very very well when I was there. Matt Rhule, who is now head coach for the Carolina Panthers was the head coach for the team. There I thought, this is so great, this is what I want to do for a career, ” Milliron explained.

Knowing she wanted to continue a career in journalism Milliron got a job in Maine as a reporter, covering local news for NBC. Covering mostly hard news, she reported tough subjects such as murder, covering everything that came her way.

“While I was there I shot all my own video and edited all of it. I was a reporter so I was on camera, I set up all the interviews, and it was the most work I had ever done in my entire life, in a very rewarding way,” Milliron said.

In an attempt to make her job more exciting and suited to her strengths, she started covering the Patriots, the New England pro football team. From there a friend from Temple brought up the starting of CBS HQ, a 24/7 media coverage of all sports. Being in frozen January Maine, she was eager to move to the sunshine state, Florida where the company was being built.

Now, she could do all the things she loved in a new and exciting way, as well as in a beautiful environment. This allowed her to be in her element, being in the heat of professional games, catering highlight reels within the moment, catching athlete’s most spectacular moments.

The live aspect of it all she felt the most when COVID-19 hit. She recalls seeing first hand how live sports and media took a complete turn, as it thoroughly shut down for the first time.

“All of a sudden I hear through my headset from one of my producers from the floor above me say ‘Hey, Rudy Gobert has COVID.’ and I thought ‘what?’. It got weird because from there every single sports league shut down, and we’re a 24/7 news network covering sports and all of a sudden all we were doing was covering COVID, there were no games,” Milliron said.

Although the world of professional sports changes with COVID-19, Milliron does not lose hope for a bright future. Even though regular testing and masks will not go away soon, she is determined that the absolute shutdown will not happen again.

While she continues her journey through sports media, she hopes to see more women like her in the field of sports. She elaborates how she believes more women should feel comfortable in their domain, illuminating the ostracizing situation of being the only women in the room and feeling the effects of it.

“I am a big proponent of women in sports and women in male dominated fields especially, and I would love to figure out a way to move that conversation forward and make it a career,” Milliron described.