Adams competes against her biggest rival, the clock, as she sprints toward another state title 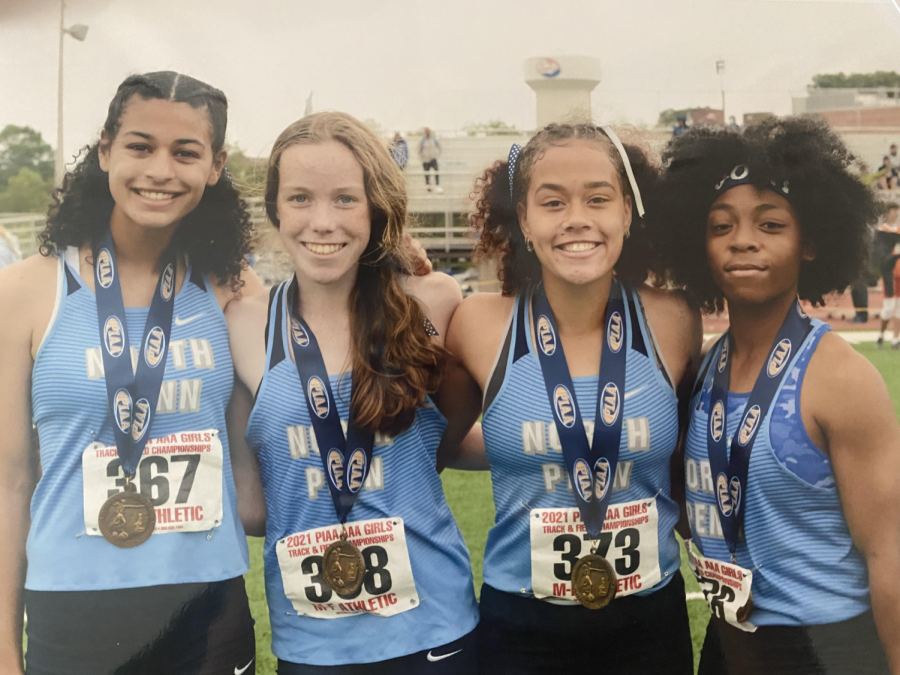 Maya Adams (left) with her relay after placing third in states.

From placing third in states last year to getting back on the track this year, North Penn Junior Maya Adams returns to decrease her time and have another successful year.

Starting out young, Adams realized that she was good at track and wanted to continue progressing as she built up her speed and techniques. North Penn Track was not the first track experience Adams has learned from as she started competing in fourth grade with Ambler Olympic Company and then in Penndale Middle School to get to where she is now.

“I realized I wasn’t that bad at track and I like running and really thought it was fun. I felt like I really did something with my life by pursuing it,” Adams stated.

Before Adams’ races, she gets nervous and her thoughts get in her own head. Warming up for an hour before her race starts allows her to distract herself and become focused on the race. She specializes in sprints, mostly the 100 meter, 200 meter, and relays, and sees herself running below a 13 second 100 meter and below a 26 second 200 meter this upcoming season.

“I like the 100 the most because it’s short. I’m best at sprints and hate long events because I’d much rather be running a shorter distance,” Adams explained.

Although Adams is seeking to excel in these goals, going a year without getting injured is one of the athlete’s main priorities. Adams suffered through a stress fracture in her back in sixth grade. Over time, Adams’ injury healed but two years later she pulled her hamstring. Once that got better, Adams reinjured her back by doing long jump. These injuries prevented Adams from competing, but as she recovered she continued working as hard as she could to get better as a runner.

“My injuries have definitely affected my racing because I can’t do as many events. After I run one event, my back starts to hurt and then I can’t run another event because it hurts too much, but it’s definitely better this year than it was last year so let’s not jinx anything,” Adams expressed.

These injuries did not stop Adams from achieving a significant amount of accomplishments. In seventh grade, Adams qualified for the 4x100m for Penn Relays. Running with Jasmine Matthews, Sierra Heisey, and Ella Broadhurst, the girls ran in a heated race finishing in second but ending up placing first as a result of the team that finished before them getting disqualified.

Another highlight of Adams’ athletic career is placing a spot on the podium in states. Last season, the runner’s relay finished third in the 4×100 with Sierra Heisey, Jael Sykes, and Megan Chester. The dreary weather did not stop the girls from implementing their techniques and getting their medals.

“I wasn’t as nervous as I thought I was going to be. What made it so hectic was that it was raining so when I went to go put my tape down on the marker, the tape flew off so I just guessed when to start,” Adams reflected.

The bond Adams has with her other teammates is what makes North Penn Track and Field different from her previous experiences. Adams’ previous team, Ambler Olympic Club, was a much bigger team than North Penn and she feels like with a smaller team she got to know her teammates and coaches better which ultimately reflects positively on her performance. With every season that passes by, the bond between Adams and her teammates continues to grow stronger. This helps with the mental part of track and the girls help Adams develop as an athlete. Since Adams runs sprints, she finds herself closer with other sprinters but that doesn’t stop her from building friendships with athletes that run distance. With lifelong friendships and teammates that will forever be by her side, the team grows as Adams progresses.

“Maya Lynn Adams is a great person. She brings her bright attitude to the track team and everybody loves it. Even on the worst days, she makes everyone happy and motivated,” Adams’ teammate, Senior Destiny Lewis-Upchurch, preached.

North Penn’s next meet is indoors at Lehigh on Friday, January 21. Catch her if you can!