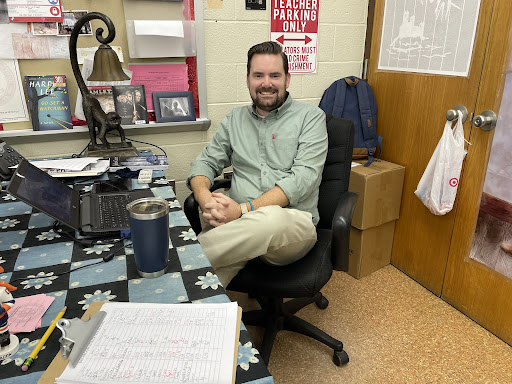 Mr. Jeffrey Miller is ready to permanently settle down in NP

Two years ago, Mr. Jeffrey Miller and his wife made a big change when he traveled across the country, going to California and leaving North Penn behind. Two years later, Miller makes his return to North Penn, coming back to his home.

Previously, Miller visited California with his wife and thoroughly enjoyed the experience. However, because his childhood was spent in Pennsylvania attending Roman Catholic High School in downtown Philadelphia and West Chester University, he initially wanted a change.

“The toughest part of leaving PA was honestly leaving North Penn, and it sounds corny, but it’s true. We knew we only wanted to do this for two years because we would eventually want kids and want them to grow up around their whole family. I knew that if I left and quit my job at North Penn that is not something I could just come back to because it’s a competitive school. People want to work here. Teachers like working here, and they stay here,” Miller said.

He planned to be gone for two years but hoped to return and work in North Penn. Though Miller’s position was not guaranteed, he was fortunate and got the chance to get rehired. After Miller returned, he went through the interview process again and was relieved to be hired.

“I do see this as a permanent job for sure. I like the people I work with. I like the students that we have here. I like how we always have something going on. I love the fact that there are things like the morning show that are a little bit wacky and are kind of tailored to North Penn. There are all these traditions here at North Penn that are really cool and unique. Even when I was teaching at other schools out there, I did miss North Penn,” Miller added.

Miller’s experience in California was distinct from his experience in Pennsylvania. When he first arrived in California, he also taught at an all-girls school. Last year, he worked full-time at an all-boys military school. The students had to wear uniforms and live on campus. In comparison to NP, the class size is different. The classes had an average of 10 to 15 students.

“I got a half-year contract to work from January till May at an all-girls school. They actually filmed the movie “Bring It On” there. We read Romeo and Juliet. It was nice weather year-round, so we used the whole campus to act out different scenes. People were more laid back where we were in Southern California and friendlier. Even down to something as simple as driving on the road. People weren’t like honking their horns. It’s more aggressive here and fast-paced. I think a big part of it was where we were living. The climate is beautiful. It’s sunny pretty much all throughout the year,” Miller explained.

This is Miller’s eighth year teaching, but he loves the change the job brings. Julius Caesar is a book in the English curriculum he previously taught, but as he teaches the curriculum each year, he feels he improves. By spending more time with his students, he learns what they like and what they don’t like. He is constantly changing how he teaches in order to tailor the course to what students enjoy.

“I don’t think I ever just had a plan and copied and pasted it. I think it will get old. We have this curriculum set, but I don’t do it the same every year. If you want to tweak things you have the freedom to do so,” Miller said.

He enjoys teaching his senior class, but it can be hard when senioritis strikes, especially during the second marking period. Teaching British Literature, which focuses on older novels by authors such as Shakespeare and Beowulf, presents a challenge, so Miller must come up with creative ways to keep the seniors engaged. However, teaching students, in general, is a difficult task. The job presents numerous challenges, but it is the challenges that motivate him to continue teaching.

“My first year teaching Caesar was tough for me because I did not know which parts to emphasize. Which ones to gloss over a little bit more. I feel like that takes time. That’s one reason I do like this job. You can change things up. There is always a different way,” Miller explained.

His love for North Penn started when he was a student at West Chester.

“I did an observation here at North Penn that changed my mind. I saw the way the kids were wrapped up with their teachers. I remember hearing Mr. Manero say on the announcements make it a great day and make it a great day for someone else too and I thought that was a really good message to start the day. Kids seemed happier here and the teachers seemed happier,” Miller said.

Miller believes that moving to California for two years was the right decision because it allowed him to experience a new environment and broaden his perspective, but he is glad to be back.

“For me, it was very good and I think it gave me perspective. I am grateful to be back in North Penn. I appreciated that people supported me when I left. It was a hard thing to explain to someone why you are leaving a place when you like it. Your family and friends are all here and you have a good job. It’s hard to say goodbye, but people at North Penn are really supportive,” Miller added.