Bretts with much to be thankful for, as the beat goes on 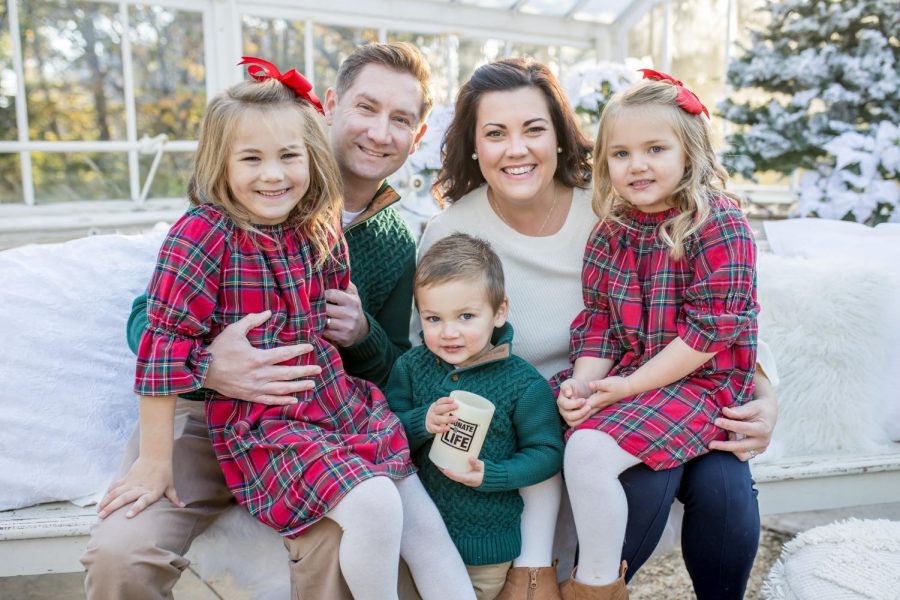 The Heart of the Matter

For North Penn High School guidance counselor Mr. Patrick Brett, failure was never a drawback. Until, it started happening within.

Nearly a year after some of the biggest challenges of his life, and after a heart and liver transplant this summer, Brett is getting back to a normal, healthy life.

From December of 2020 until July of 2021, The Hospital of the University of Pennsylvania was Mr. Brett’s home. He was admitted after almost two full years of heart and liver failure, and weeks of procedures. During the first few months he was separated from his family, his students, and everyday life as he awaited his transplant. Mr. Brett was born with Tetralogy of Fallot. Tetralogy of Fallot is a heart condition made up of four heart defects from birth. Common effects from Tetralogy of Fallot are lack of oxygen, trouble gaining weight, heart murmurs, fainting, and blue-tinted skin. It can also be passed down through generations.

“I was born with Tetralogy of Fallot. For me, it was a disease that impacted me to a certain extent. It wasn’t the most affected thing in my everyday life. I was able to live a pretty normal life compared to the other kids born with Tetralogy of Fallot that were impacted more than I was. I played sports, I went to school everyday, and I was involved in many activities growing up,’’ Mr. Brett stated.

As much as Mr. Brett lived a normal childhood, his condition still found a way to place him on an operating table.

Mr. Brett never let his condition hold him back, especially from playing the sports he loves. Up until a frightening incident happened on the basketball court.

“When I was 13 turning 14, I passed out on the basketball court and woke up in the hospital. I had to have an ICD, an implantable cardioverter defibrillator, to monitor my heart and keep it beating so my heart wouldn’t go into a rhythm that could kill me. That caused me to stop playing organized sports, more so in a competitive way,’’ Mr. Brett stated.

Although Mr. Brett had to stop playing competitive sports, his love and dedication carried on.

“I got into managing the teams in high school as a student manager. Eventually, I started coaching at 18 years old. That would lead me to continue coaching halfway through my career at North Penn with Coach Manero, as well as the basketball team,’’ Mr. Brett shared.

When Mr. Brett was 21 he received news that was a life changer, but unfortunately showed to be untrue.

“When I was 21, I had another open heart surgery. They told me that I was completely finished with surgeries, and that I would no longer need anymore. Which led to be true up until later adulthood. I had another surgery not related to my heart condition, in 2018. Unfortunately, it became infected and I became very ill. I was given medicine that had put me in heart and liver failure, and I never recovered. For about two full years I was in heart and liver failure pretty significantly. That’s when the team at University of Pennsylvania said that we need to go forward with the transplant, in Fall of 2020. I was getting procedures done almost weekly to remove fluid from my stomach, or just fluid in general. My procedures became so frequent and so unsafe that they ended up moving me to the hospital from December 29th of 2020, until after I recovered the transplant on July 16th of 2021. Within the first 3 months of being in the hospital, I couldn’t see my wife or children because of Covid,’’ Mr. Brett explained.

Even though Mr. Brett could not physically be with his friends, and coworkers, he still felt their love and support.

“During that time I was able to work with North Penn; they allowed me to work from the hospital. It wasn’t really different from working at home, it was just a matter of scheduling around my doctors appointments. The district offices have been very accommodating for me. As well as my colleagues, they have been giving out an immense amount of support, whether it was phone calls, text messages, offering to do things for the kids, Mrs. Brett, or myself. Mrs. Brett started a facebook page to give updates to everyone who wanted to know more. The amount of people responding there, or just checking in has been very overwhelming in a good way,’’ Mr. Brett shared.

Mr. Brett’s wife, Mrs. Lauren Brett, is a math teacher at North Penn. While her husband was in the hospital for seven months, she was handling their everyday life by herself. When hearing the news that her husband would be receiving the transplant, Mrs. Brett felt a sense of relief.

“When I heard that Mr. Brett was able to receive the transplant, I felt relieved and rushed to the hospital. It was relieving because we no longer had to play the waiting game, we now just needed to focus on his recovery. They admitted him to the hospital on December 29th, so up until he was released in July, I was taking care of our 3 children by myself. I did receive a lot of help from our family, and friends but knowing that he would be able to return home was a very big sigh of relief,’’ Mrs. Brett stated.

In the early stages of their relationship, Mr. Brett’s condition was never an overwhelming concern for them. In fact, they thought it would never become a concern at all.

“When Mr. Brett and I first started dating, he was nowhere near needing a heart transplant since he was told that his condition wouldn’t need anymore surgeries. We would go to doctors appointments every six months and everything was okay. In 2019, when we really realized how sick he had become, it was the first time that his condition was ever a serious topic of discussion for us. I was in the mindset that we’re married, and have children together so how are we going to overcome this together as a family. The only time prior to his transplant where his condition could affect our family, was when we were having children. We asked his doctors if his condition would pass on to our children, and he said no because Mr. Brett’s condition was because of structural development, not passed down,’’ Mrs. Brett explained.

Similar to Mr. Brett’s experience, North Penn was very understanding of Mrs. Brett’s situation. They allowed her to continue to work from home until she felt comfortable enough to resume being back in person.

“North Penn was great with our situation. They let me work from home until Mr. Brett was fully vaccinated. When we transitioned back into school during November, they let me continue to teach from home from November through April. I finally felt comfortable teaching back in school when Mr. Brett and I became fully vaccinated,’’ Mrs. Brett said.

With having 3 young children at home, Mrs. Brett needed to keep germ safety as one of her top priorities.

“Our children understand that they need to wear masks to keep themselves, and their dad safe. They are very good at understanding that there are things that we don’t do now because of the possibility of germs. They wear masks everywhere without question. They do a great job with wearing masks and being around other people in public,’’ Mrs. Brett shared.

Since being back home from the hospital, Mr. Brett and his family have been enjoying their quality time together.

“Mr. Brett and I have learned so much from this regarding staying safe, and realizing life could change on a dime. This has really shown our kids to be grateful for every little thing, and now we all just appreciate the things we can do as a family again because he’s healthy,’’ Mrs. Brett said.

Even when we believe we’re strong, having support from friends is a very soothing feeling. This is what Mrs. Brett felt after receiving an immense amount of support from her friends.

We have really good group of friends here at North Penn. When I came back to work last spring, they would ask how I was doing and I would break down. They were always there to reassure me and comfort me. Everyone is always checking in, and constantly making sure that we’re okay. The support and love has been an extreme backbone for us,’’ Mrs. Brett shared.

Certainly, the Bretts have a lot to be thankful for this holiday season, nearly one year after the transplant journey began.

“For our family to be saved, a family lost a loved one. For families like ours, please become an organ donor or give back to the community,” Mrs. Brett lastly stated.