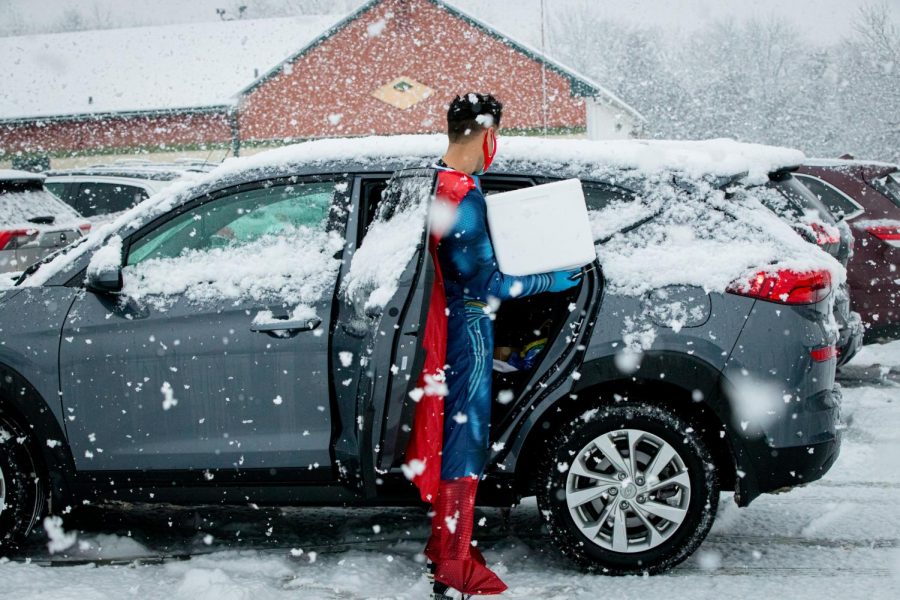 Mayank Amin, dressed as Superman, helps patients out of the car, carrying a box of doses of the COVID-19 vaccine.

SKIPPACK – Real-life superheroes are hard to come by, especially in a world as divided as today. Yet a local pharmacist, donning a superman suit, has become exactly that. Yet, he isn’t stopping the Joker or dueling against Thanos. Instead, this North Penn High School Alum is doing work even the most malicious villains would never challenge; giving out the vaccine.

Hundreds of elderly residents in Skippack received the first of their long-awaited COVID vaccine doses, and it was thanks to a class of 2003 North Penn graduate Mayank Amin’s heroic efforts. Amin had applied to be a vaccine distributor, and, within a couple of short days, his Skippack Pharmacy got the greenlight.

Distributing the vaccine has been a real challenge in Pennsylvania. There have been shortages and delays throughout the whole state, and, overall, rollout has not been as successful as expected. But after protocol training and getting the proper equipment to store the vaccine, Amin was ready to do his part. As the owner of the Skippack Pharmacy, he wants to provide for his community.

Planning large events is nothing new for Amin; he has a wedding planning business. But this event was far from the events he has planned in the past.

“We gave out our first doses on Sunday, February 7th, but I had only received confirmation the Wednesday prior. The following day, the county delivered our vaccines to the pharmacy. I was told I could get it by a later date again, but I knew the vaccines needed to be given out as soon as possible. So the same day, I drove an hour away to the pharmacy and picked it up,” Amin said.

With little time to plan, but plenty of doses to give, Amin had to organize things fast. In a short 36 hours of preparation, Amin got around 100 volunteers, and on the day of his clinic, administered roughly 1,000 doses.

The timing was not the only problem. Amin also had to prepare for the snowstorm… but like any good hero, he couldn’t be stopped that easily.

“Even though I had just received the vaccines, it was something that needed to get done. Sure, I could have waited for the storm to pass and vaccinate throughout the week, but I would not be able to do what I did. All the volunteers… everyone who helped would be less available. People are working and busy. Getting the initial 1000 doses out as fast as I did was only possible on that day,” Amin said.

Those volunteers ranged from people who work in his pharmacy to people who worked at the local fire department. It was a group effort, with many willing to help. A true sense of community was built throughout the process. Amin recalls his vaccinated patients coming back hours later and shoveling snow.

“I cannot take all the credit for what happened. Each person contributed to something great. We are all part of the reason it happened. The process is a team effort, and although I get the recognition, I know this was not possible alone. It’s a community running the clinic helping out our most vulnerable community members, not just me.” Amin added.

A wide variety of people got doses, from some young people with underlying conditions to the oldest married couple in Pennsylvania, who’ve been married for 80 years.

On February 14th, another clinic was held, which brought the total number of doses given to 2,500. That number is among the most in the county, only 2nd to the Montgomery County Health Department. His wait list is around 27,000 people living in Montgomery County.

“It’s very fulfilling to have the opportunity to do this; it brings hope for a lot of people. I am just an organizer of what’s been going on. This is something that we need as a community, I just am named in the papers.” Amin humbly said.

Amin is proud to know that recipients of the vaccine live at their homes a little more comfortably, knowing that their local pharmacy was able to provide them with the key to moving toward normalcy.

“In the lines, everyone was elated. You can’t see the smiles, but you could tell by their eyes and attitude this was a big day for them. Tears of happiness ran down their faces knowing that they will soon be able to see their family for the first time in such a long time,” Amin added.

He is grateful to be a part of one of the most important processes for life today. He does not plan on stopping providing for his community either.

“The work is not done yet, and it may not be done for a while,” Amin said, “But each day we get closer and closer to the day where it all ends.”