Levandowski and Smith building connections in a socially distant world 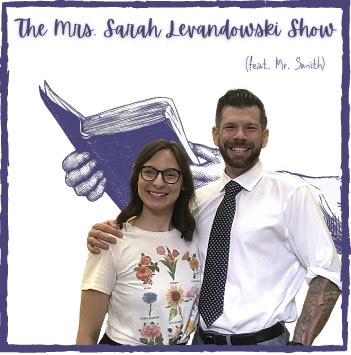 In preparation for the 2020-2021 school year, Smith reached out to Levandowski asking if she wanted to collaborate on a podcast for their students to get to know them.

“We started with the purpose of it being a vehicle for our students to get to know us a little bit better and for us to kind of hit on some of the content that we were covering because Mr. Smith and I both teach 11th grade,” Levandowski said. “We knew that there would be things that we were both teaching at the same time that we could discuss, but also given the virtual format of everything, we were worried about the human aspect of ourselves translating to our students and getting to know students on a personal level, rather than just strictly business, which I think the virtual setting can often feel a lot like that.”

In regards to getting the podcast set up, they chose to use the platform Loom to publish episodes. They also created a thumbnail graphic.

When coming up with the title for their podcast, Smith felt that Levandowski’s name was more intriguing, so they both agreed to call it the Mrs. Sarah Levandowski Show feat. Mr. Smith.

The range of topics their students can expect to hear is mostly about literature and their personal lives.

“We’ve tried to relate some of the things that we’re reading in class to our lives. For example, when we read “To My Dear and Loving Husband” in class, Mr. Smith and I then spent time talking about our spouses on the podcast as a way to connect as well,” Levandowski said. “I think with the virtual setting, a lot of times you miss out on the tiny little side conversations or pieces of information that you would typically share with students and learn about each other. It’s also just a way for us to make sure we’re giving students information about who we are outside of our classrooms as a way to get to know us.”

“When we talked about “Self-Reliance,” Emerson’s essay, we talked about what it was like when we were in high school, and if we felt that social pressure to go along with the crowd or just do our own thing. I think it’s helpful for students to hear that. We remember what it was like and that we felt those things and that it has changed a lot, but there are parts of it that are still there, and that we get it, and we know that it’s not always just going to be about academics,” Smith added.

They base most of the conversations in each episode on their own everyday conversations. Sometimes, they plan what they want to discuss minutes before recording or, if they decide on a topic that requires some preparation, they take the time to plan things out.

“I remember after the first episode where we didn’t plan it out and [Levandowski was] kind of like, ‘Shouldn’t we plan out the questions?’ And I was like, ‘No, we’re just going to talk,’ and then we did it and [Levandowski was] like, ‘Wow, that went really well,’ and I was like, ‘Yep,’” Smith said. “I think that’s probably a product of having listened to so many podcasts and radio—it kind of has that vibe. Part of it is also that this is a fun thing that we do, but we’re obviously busy as English teachers planning and grading nonstop, and sometimes it’s like, ‘Oh, well, I didn’t even realize it was Friday. I guess we have the record.’ That’s happened at least once, where the little reminder to join the meet to record it pops up.”

Once they finish recording an episode, Smith does minimal editing, and then they post it on their Canvas pages.

Their favorite episodes so far have been their Halloween ones where they did a This or That but with candy and talked about their costumes from the past. For Mr. Smith, specifically, he enjoyed their episode where they discussed “Self-Reliance.”

“I say that because it brought us to a spot where we could be a little vulnerable and talk about our experiences as high school students. That’s when we read “Self-Reliance.” I read it in, I want to say, 10th grade. We were having those same interactions with our teachers and our peers,” Smith said. “I think that vulnerability can go a long way because teachers can feel distant, especially virtually. So if a kid watches that and they’re like, ‘well, these people get it to some extent,’ I think that’s powerful, and that’s really the driving force behind it, all jokes aside.”

For both Levandowski and Smith, the podcast is also a great way for the two to catch up since they can no longer eat with each other at school or hang out outside of school due to the pandemic.

“I think all of us as teachers and I’m sure students right now feel like there are a million things to do all the time. And it could absolutely feel daunting to take on something else like a weekly podcast. However, it is something I look forward to every week, and there’s never a time where I’m like, ‘I don’t want to do that’ or ‘I don’t feel like doing this,”’ Levandowski said. “I always want to build the podcast because I know that it’s a chance for me to talk to one of my friends and catch up and it is a way that I can extend doing the thing that I love the most, which is teaching.”

The two hope that through the podcast, their students can see that they do care about them a lot and that they’re making an effort to build a relationship with them, even in a virtual setting where it can difficult. They hope that they can see them beyond their Chromebook screens.

“The idea that a student could watch this and see how literature touches our lives and impacts us and has shaped us would be like blow me away absolute 100% most positive thing that could happen,” Smith said. “If not that, then it’s that they could take away that we care about students and we were trying to do that in an interesting way. And hopefully not failing miserably.”