Academic Decathlon: a competition made for everyone 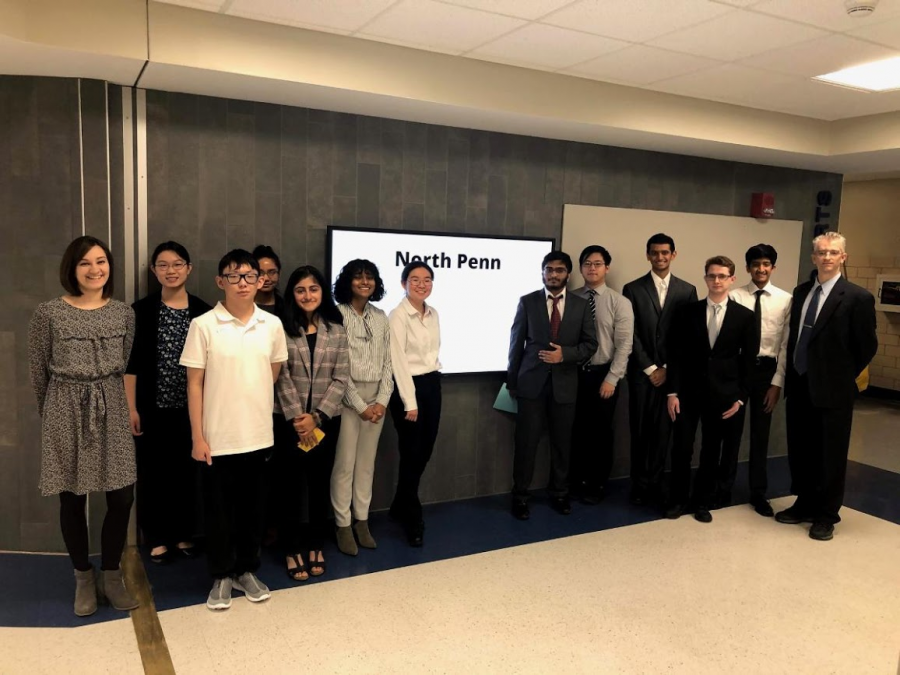 TOWAMENCIN — The thought of entering a competition can be intimidating. Oftentimes, it is perceived that only the best can participate; however, North Penn’s Academic Decathlon has proven that it is actually those who have a passion for learning who are capable of excelling.

“Students, regardless of grades, clubs, GPAs, and whatever, who truly appreciate knowledge, are perfect candidates to become members of the team,” Mr. Daniel Mullarkey, Academic Decathlon Coach, said.

Academic Decathlon, often referred to as Acadec, is a scholastic competition for high school students to compete against other schools across the region, state, and nation as a whole. Teams consist of 9 members and are based on GPA. The divisions are Honors (3.80 – 4.00 GPA), Scholastic (3.20 – 3.799 GPA), and Varsity (0.00 – 3.199 GPA). The competition is made up of 10 events, which are connected to an annual theme, this year being The Cold War. The events are composed of music, art, literature, math, science, social science, economics, speech, interview, and essay writing.

The competitions, with the exception of speech, essay, and interview, are multiple-choice tests consisting of approximately 50 questions. Sometimes, there is one outlier which has 35. Students have 30 minutes to take the tests, which checks your understanding of the curriculum. Essays are based on one of the events and you also give a prepared speech and an impromptu speech. As for the interviews, you sit in front of the judges and answer questions.

Early on in the year, students participate in two scrimmages, which acts as a progress check to see what they need in order to get to regionals. Participants will not have to say a speech, do an interview, and write an essay during scrimmages. The competition really kicks off at regionals, however. If you place first or second, you can move to states and if you place first for states, you can move on to nationals.

As a club, they meet twice a week on Tuesdays and Thursdays from 3 to 4:30. The start of the school year consists of recruiting members, studying the curriculums, and working on team bonding. In order to prepare for competitions, members play Jeopardy and Kahoot and also engage in conversation to review the materials given to them. Now that they’re in a virtual setting, they are still doing the same things in regards to preparation for the competitions, but they are making sure that the team members continue to build strong relationships with each other.

In an in-person setting, the team will take a bus to whichever school is hosting the competition. They will take 30 minutes for each test with breaks in between. For regionals, participants will also change into formal outfits. Then, they’ll present their speeches, have their interviews, and write their essays. While the teams are waiting for the scores to be counted, they participate in a super quiz relay that is separate from the competition.

“Each division goes down to the front of the room, and the questions are displayed on a big screen which you have to answer. It’s kind of fast-paced with one question after the other. And then once the Varsity Division is done, then the Scholastic Division goes down and does the same thing. And then after the Scholastic Division is done, the Honors Division goes. The teams that answer the most questions correct in the super quiz relay wins,” Maggie Zong, captain of the North Penn Academic Decathlon Team, said.

Regionals and Nationals are longer events, so they spend more time on the road and sometimes stay in hotels.

The North Penn team virtually competed in their first scrimmage of the year in early November using Schoology. They also used Microsoft Teams for introductions and the award ceremony. Medals were mailed to the schools.

“The results were mixed. The team took home many individual medals, including several of the all-around, but came up a little short on the overall team total. We have a couple more scrimmages culminating in the eastern regional competition in February, and the team is already preparing. We came in second last year to Souderton after winning it the year prior.  Even though we clinched a wildcard placement to states, we want to win back the regional title we won in 2019,” Mullarkey said.

Being a part of Academic Decathlon gives people an opportunity to learn a multitude of subjects.

While it requires additional time and commitment compared to other clubs offered at North Penn, students can create strong friendships while expanding their knowledge and continuing a tradition.

“It’s not just an extracurricular. It’s so much more than that. It’s conversations and team bonding,” Zong said.

“There is a rich history and legacy of North Penn in the Academic Decathlon program, going all the way back to the 1980s, and North Penn has won states in every decade since. It is our hope to continue this tradition, and an honor and a privilege to carry the torch,” Mullarkey said.