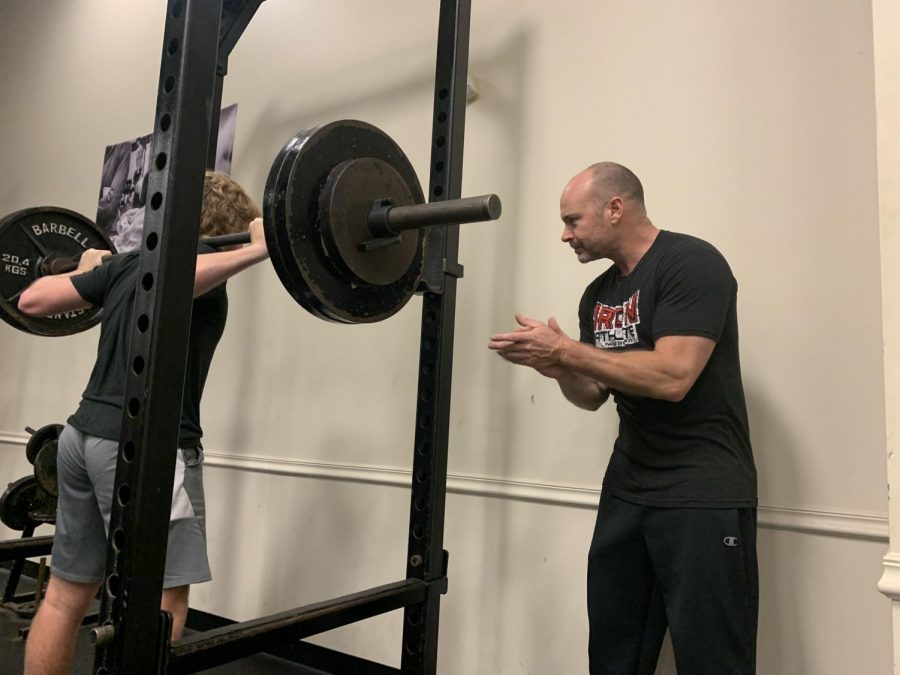 Coach Jim Ward is an essential part to many North Penn teams and is always willing to keep playing in shape for their seasons.

TOWAMENCIN — When it comes to athletics at North Penn, they are no joke. Ranked #1 Athletics Department in Pennsylvania by MaxPreps, North Penn always has always had very strong and sound sports teams. A key part of North Penn athletics is someone who is not even a North Penn employee: strength and conditioning coach Jim Ward.

Coach Ward grew up in Lansdale, where he grew a passion for weightlifting. When he went to the Boys Club, he gravitated towards the weight room. Being in that weight room gave him a safe space and was something that he would look forward to on a daily basis.

“Lifting weights was always something that made me feel good and gave me confidence,” Ward said. “My whole life, through many ups and downs, the one consistent thing was that the gym became my own little sanctuary.”

When getting into Sports Performance training, Ward was still in school at Temple University. He knew that he wanted to help people stay in shape and get better at their craft. Being a North Penn alumni himself, Ward returned home to get his start. Ward started Sports Performance training in 2010 with the Nor-Gwyn Hawks baseball team and North Penns girls field hockey team. For the last decade, Ward has been helping North Penn teams get stronger in the offseason with his workout programs. Every year there are new challenges to try and tackle when creating the programs, but it is something that Ward enjoys.

“Taking into consideration the time of year we are training at, the type of sport, the type of athletes in the weight room, it is a lot,” Ward said. “It has to be challenging but also safe and efficient.”

Knowing that he is helping another generation of North Penn athletes is something that helps Ward keep going. Beyond just the game itself, Ward is all about giving tips to kids on how to take care of their bodies and staying in shape. He has learned how important and vital exercise is and will continue to pass his knowledge on.

“I really do like teaching. I like being able to be there and pass on any type of information that was given to me so that they could stay healthy themselves,” Ward said.

A big part of Ward’s contributions to North Penn is his work with the football team. Coach Ward started with the team back in 2013 and works with the team for 10 months a year, constantly getting after it in the weight room and on the field during speed camp. Ward puts a lot of time in and the players take notice as well as appreciate everything he does for them.

“Coach Ward is really a big part of my athletic career here,” senior football player DJ Banks said. “He is always here helping us get stronger and better. More importantly, he always tries to make sure we stay as healthy as possible.”

When talking to coaches of the teams Ward has worked with, it is clear he has made his mark on the community at North Penn. Ward brings intensity but also manages to be a constant positive and uplifting person around the building.

“His worth is really immeasurable,” said Assistant football coach Dave Franek. “He is all in and wants to see everyone succeed always. He no doubt is always a pleasure to be around.”

Outside of helping out with North Penn athletics, Ward works at a gym called IronAthlete with Sara Zollars, the owner. The gym, which originally started with a single client in 2007, has evolved from a personal training studio in 2013 to a full-scale gym now. IronAthelte is located right in the heart of Lansdale and has become a popular place for local athletes and weightlifters to workout at. The brand that IronAthelte has been able to build is something that Ward is very proud of and is grateful that all the work he put into it has paid off.

“When I wear IronAthelte apparel, [the feeling he gets] is similar to when I used to put on a North Penn jersey,” Ward said. “It is something that I am really proud of—something I worked very hard for, and it really represents how much time has gone into this.”

Ward hopes to help North Penn bring in more league and district titles in the future. The mark Ward leaves is definitely something that every graduating class feels and underclassmen look forward to every sports year.