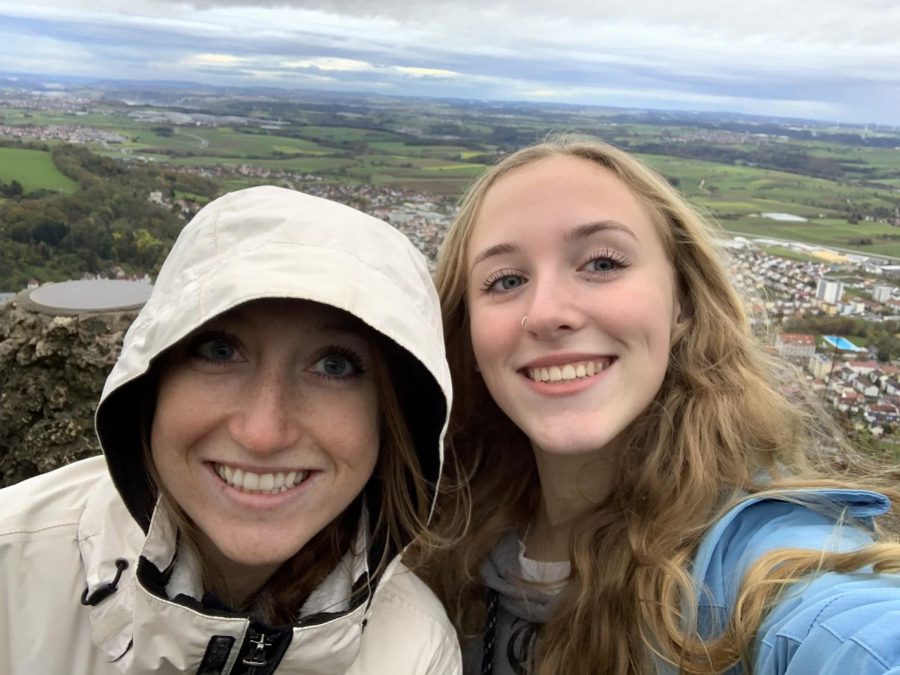 Curran (R) and her stepsister (L) when she visited in November. They went hiking at the Rosenberg.

TOWAMENCIN — North Penn High School junior Ally Curran initially applied to study abroad in Spain, but when she opened her email, she found that she was going to Germany instead.

“It’s funny because I took Spanish 3 honors, but now I’m taking AP German. In the first half of the email, it said, ‘I’m so sorry that we cannot offer you this opportunity’ so I stopped reading the email. My friends told me to keep reading the email and then it said, ‘we’d love to offer you a spot as an exchange student in Aalen, Germany.’ I was unsure of it because I didn’t speak German. Looking back, Germany has always been the choice for me, but I didn’t really know that,” Curran said.

Prior to coming to Germany, Curran had only taken 3 years of Spanish and not a single year of German, so she had no previous knowledge other than what she learned from the app Duolingo.

During Curran’s first week in Aalen, Germany, she had no school and got to tour around the city with her host family. She went to Ulm, which has the tallest cathedral in the world, Ulm Minster Cathedral. Curran also got to visit her host mom’s grandparents’s house.

A week after she arrived, she began school. She was considered a sophomore and took chemistry, physics, biology, forensics, history, economics, German, French, and English.

11th and 12th graders at school would have different schedules, but every grade below grade 10 would have classes that were split into 3 parts. Curran was in the 10C class, meaning that she would be with those same 25 students for the entire day everyday.

When she had afternoon classes, she would have a one hour lunch break in between her day. When she ended school at 1, she would have lunch right after school. Her school didn’t have a cafeteria, so she went out to buy lunch with her friends.

The school was smaller than North Penn and had around 1000 students. It made it easier to build better relationships with the teachers. Her school also used less technology compared to North Penn. Presentations would be done on paper and they would use a projector to present it to the class. All the tests were on paper and instead of multiple choice, students had to answer short answer questions. Curran had to travel to each class instead of having her teachers come to her classroom. They also had a separate science building.

On Mondays, she had class from 7:20 AM to 5:15 PM. After school, she would attend a separate German class for 3 hours.

During the holidays, schools would give the students two week breaks.

“It was pretty nice because it felt good to reset from school,” Curran said.

“I think I’ll always be very close with her. When we met, we just clicked. When I first came, she invited me over to her house and we went on a walk around her area. We walked to this one field and sat down and looked at all of these houses around us. It was this huge open area. I think this experience solidified my comfort being in Germany,” Curran said.

Being far away from home, Curran often missed her mom and friends.

“It was really hard, but I feel like as the year went on, I had the mindset of doing this for myself and when I come home, I can treat myself by being around these people. This experience was for me and I need to focus on me right now, and that’s okay if I don’t do it with all of these people around me. I knew that I would come home and see them again, but I also knew that I had to do this for myself,” Curran said.

Curran called her mom at least once a week, so they could share life updates. She constantly Facetimed her friends and used social media to connect with them.

“Nowadays, with Snapchat and Instagram, I always feel so connected with everyone. Even though I was far away, I feel like I always knew what was going on in my friends’s lives,” Curran said.

Curran noticed that both of her host families had standard household rules, so it wasn’t hard to get used to. For Christmas, however, her host family opened their gifts on the night of Christmas Eve after their dinner and on Christmas day, they went to their grandmother’s house to celebrate, which was a tradition Curran didn’t have.

Curran distinctly remembers the moment she realized she was beginning to improve on her German.

“I was walking somewhere and I had to get there really fast, but I wanted to get some food, so I stopped and walked into a bakery and ordered a cinnamon roll and did it all in German. That was the first time I said a lot of things in German. I felt really proud of myself, and I even told the lady at the front desk, ‘I’m sorry if my German is bad,’ but I ordered perfectly,” Curran said.

This experience made Curran extremely proud of herself because she arrived in Germany with little to no knowledge in German and it showed that she improved in just a few months.

Curran enjoyed the scenery in Germany. The buildings were colorful and inviting and the mountains had beautiful views.

“You can literally take a bus ride to a mountain and go and look over it. There are so many amazing places to hike. There’s a mountain with ruins of a castle and you can go up on it and look over the city. It’s just amazing at night. I went there at sunrise one morning with some friends and it was really awesome. It’s so beautiful in Germany and you appreciate the world more when you see these things,” Curran said.

She traveled to many cities like Berlin and Dresden. She also visited her family who lived near the Black Forest. Dresden was one of her favorite places she visited where she got to go to the Dresden Frauenkirche which is a Lutheran church.

“The inside is gorgeous and it’s all made with gold. There’s a high level that you can walk upstairs to and I have a friend who is in a choir and they all circled around and sang down the church and it was amazing,” Curran said.

When the news about COVID-19 started going around, Curran thought it would just go away.

“It just kept spreading and getting worse. My host mom started to panic and then there was a stay at home order. I thought it was crazy,” Curran said.

At around March 12th, her school shut down. Schools had to transition to online school, but it seemed optional. Everyone received homework through a website, but there weren’t mandatory calls.

Curran didn’t expect to have to go home so soon. She thought that it would all be over and things would go back to normal.

“One night, it was the option of going home and the next night, I was told that I had to go home,” Curran said.

For her last two weeks, Curran stayed at Helena’s house and she got to visit a few of the friends and her boyfriend.

When she had to leave, she was angry at first.

“I kind of wanted to put the blame on someone. Now, I’ve come to terms with it. I know that it’s okay that things don’t always work out, but the important thing is that I did it and I got to spend 8 months of my life doing something I’ve always been curious about. I’m not looking at it as a loss, I’m looking at it as at least I got to go,” Curran said.

Now that she’s back, she’s currently taking two semester classes. Next year, she plans on being a part of North Penn’s Wind Ensemble and focusing on her college plans.

Throughout her entire experience, she learned that in the moments where you begin to feel frustrated, you must learn to forgive.

“There are some big challenges that you need to get through. I do feel that I’ve grown as a person. I feel like I found peace in myself. I’ve always tried to find myself and now that I’ve learned some things about myself, I feel more confident,” Curran said.

“The reflection of what you have in your life is how much you’ve worked. I think it’s really important for people to learn that things don’t get handed to you. You really have to work for what you want. I worked so hard and I didn’t get accepted to Spain, but I ended up going to Germany. Sometimes, life will throw those kinds of curve balls at you, but you just have to work and keep going through it,” Curran said