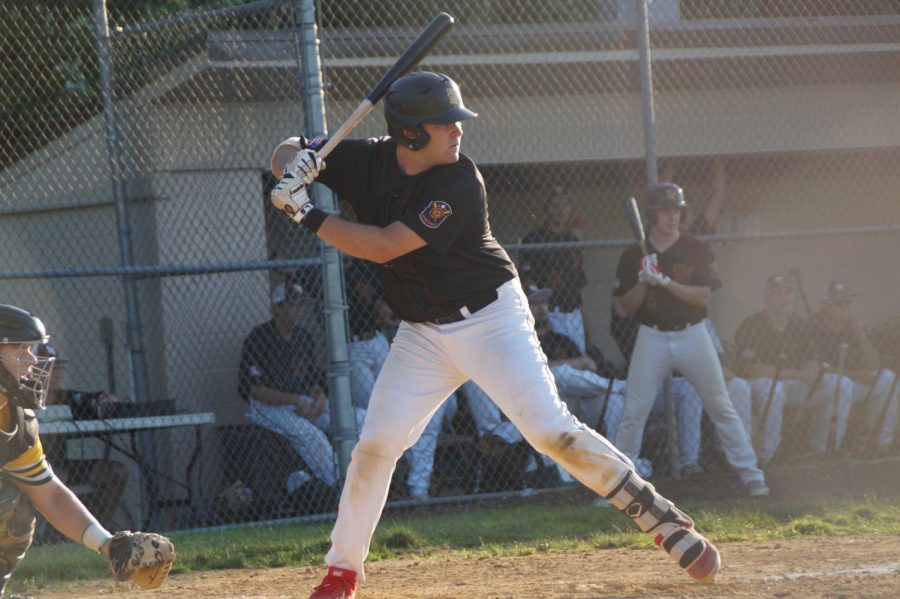 Once his school season ends, Collins is found playing in the Bux Mont American Legion Baseball league for the Hatfield-Towamencin Titans. This year he will transition to Perky League baseball.

Once his time on the North Penn baseball field came to an end, it was time for Billy Collins IV to step onto the Gywnedd Mercy campus and their baseball program.  For Collins, a baseball field has always been a second home for him.

“Baseball would be kinda like my life.  Everything I do revolves around baseball,” Collins said.

The 2018 graduate was mostly known for his time on the baseball field as a Knight.  Collins made the varsity team as a sophomore and was mostly a first baseman, but occasionally saw time on the mound.  He became an everyday starter in the middle of his junior year and then in his senior year he was in middle of the order to help the Knights to the Continental Conference Championship after an undefeated, 12-0, season in league play.

“North Penn Baseball has had a huge impact on my life. North Penn Baseball has helped me get to where I am today. Baseball at North Penn gave me the opportunity to showcase myself and made me develop as a player to get to the next level. Coach Manero and his staff gave me a chance to go out there and compete every single day and I am very thankful for that,” Collins explained.

Collins and current North Penn senior Chris McLean have been childhood friends for a long time.  During Collins’s senior year, McLean got called up as a sophomore to the varsity squad.  It’s a big jump to go from JV to varsity, especially in the middle of the season, but Collins was as welcoming as could be.

“I’ve known Billy my whole and he’s been kinda like a big brother to me.  When I got that call up it was the first time we played on the same team together.  I don’t know if he really didn’t have a throwing partner but he catered around all my needs.  And it wasn’t like I had to ask, it was expected for him.  He said, “Chris you got a ball,” and I didn’t have to wait around to find a partner.  It was more like of reaction for him.  He drove me everywhere.  Everyday my stuff was in his car, he drove me home from practice, he drove me to Knights camp every morning and picked me up.  We’d get food after practice somedays.  Overall he made you feel like you were a part of the team.  You go out with the guys, you talk to them, hang with them and he put me in that atmosphere more.  We went to the cages all the time in the summer and it was like he was mentoring me, not only physically but mentally.  If there was something I was doing wrong with my swing he would immediately jump and help me.  Whether it was giving me drills or helping me mentally after not doing so well, he would just help me make adjustments and tell me to keep going. ”  McLean, who will play baseball at Jefferson University, explained.

After the celebration of his graduation, Collins headed to Gwynedd Mercy University where he plays baseball for the Griffins.

“I chose Gwynedd Mercy University because I knew it would give me the chance to have a great education while playing at the next level. I am able to balance baseball, school, and social life,” Collins said.

On the field, Collins continued to pitch and play first base, while also seeing time at the designated hitter spot.  He helped the Griffins to an Atlantic East Conference championship his freshman year.  Collins was in the starting lineup 12 times that season and batted .267 while driving in 10 RBIs and posting a .404 on-base percentage.

“Being a part of the championship team last year was one of the best feelings in the world. Going in, I did not know what to expect, I was just going in and competed and showed them what I had. Our team struggled early on, but I saw we had something special. As the season progressed it was fun to sit back and watch a very talent filled team go out there and compete day in and day out and whenever my number was called I always gave it 110% and tried to help the team anyway I could. But it was a really exciting time and I enjoyed every second of it,” Collins said.

Unfortunately because of the coronavirus, his sophomore campaign came to an abrupt stop.

“Not playing this year was a disappointment. You spend many months over the winter getting ready for the season and not to have the opportunity, it really hurts.  But I really feel bad for this year’s (North Penn) seniors . I remember my senior year being one of the best years in all of high school.  I am very close with the entire senior class on the baseball team and it broke my heart. After 13 years of hard work and dedication to the game, they can’t even enjoy one more season together. And for some players they wont even play the game again which is disappointing but as we continue on, they all need to keep their heads up and stay involved in the game anyway they can,” Collins expressed.

In the classroom, Collins is studying sports managements in hopes of one day getting a well-paying job, while still staying in the game of baseball someway or another.

“College life differs from high school life. There is a bigger workload, but your work is not due right away and the freedom to pick your schedule is another added bonus,” Collins said.

When he’s not in the classroom or on a baseball field, the 6’4″ 250-pound Collins can be found weightlifting, doing homework, hanging out with friends, or working at Pancheros Mexican Grill.  Collins’s future plans for college is to use his extra year of eligibility and attend GMU for five years and help contribute to a winning effort on the field.

“Live life, make more friends, and be able to enjoy the rest of my time in school,” Collins said on his aspirations for the rest of his college years.

“My favorite part of college life has been making new friendships that will last a lifetime.”

“The biggest thing I miss about North Penn is definitely the baseball family. My time at North Penn was filled with baseball and that’s something I would never change in a million years.”

“Some advice I would give to high schoolers today would be to keep working hard and set goals for yourself. Never give up your goals until you reach them. In whatever you do, always give 110%.”