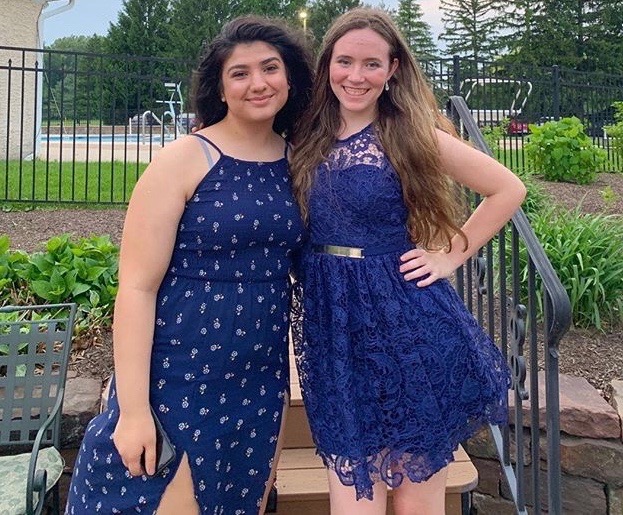 Reflect on Your Time as Thespian Troupe #5464 President:

“Being Thespian President has given me more of a voice. I feel that since I became the President I have more confidence and I am able to speak up more. I am generally the quiet kid in class, but when it comes to organizing Thespian events and being with my Troupe I make myself heard. Sophomore year I got involved in everything I could that was Thespian related, which I believe helped me get to know the Troupe and get to know what we do as Thespians.

I was Assistant Stage Manager for 1776 and Stage Manager for Fiddler on the Roof, which helped me in terms of leadership. Junior year, I got to be a Broadway Cares Coordinator, one of the cabinet members of the Thespian Troupe; I was in charge of organizing our Broadway Cares Gala for the 20th anniversary. I think that has helped and prepared me greatly for the organization and the planning that goes into this position. I also happened to be the Stage Manager again for Midsummer, Mamma Mia and Once Upon A Time, which again required leadership and organization, both important for the Thespian President to have.”

Talk About Your Time Balancing Involvement in Both STEM and Theatre:

“Being a leader for the Thespian Troupe, the Stage Manager, being in honors classes, taking Engineering classes, joining our school’s International Research Team, and doing after school sports such as flag football and rugby (for a short time) has taught me a great deal about responsibility and balancing all those responsibilities. If you love doing something, you find ways to make all the stress around you work and still put effort into it all. Also, I have learned to work with some pretty difficult people; it is important to learn to deal and work with people with different viewpoints and work ethics than yourself, because the world is filled with people that are different from you and if you do not learn how to work with them, then things won’t get done.”

“I am going to college for Civil Engineering, which is a very general and broad aspect of engineering. It covers foundations of buildings to buildings themselves, as well as traffic lights, roads, bridges, and railways. I am doing a co-op program, Bachelors’ and Masters’ program. This will be five years of college instead of the traditional four, but it gives me both a Bachelors and a Masters Degree, and I would have plenty of work experience before I officially get out into the workforce. And when I get out into the workforce, I am hoping to become a structural engineer, and eventually get my P.E.”

“Does the 2018 Pennsylvania State Thespian Conference count since it was held at North Penn? If so, sitting in the booth waiting to start our performance of A Midsummer Night’s Dream hearing the Thespians bounce in the squeaky North Penn auditorium seats, and then suddenly go silent as we took the North Penn House lights out. If that doesn’t count, then every moment that I got to see one of my teachers smile. I feel like it is such a rare moment to see a genuine smile on a teacher’s face, and I feel like it something that we as students too often ignore.”

“My favorite classes have to be my engineering classes at the engineering academy. I feel like these classes have helped shape who I am as a person; they have unlocked sides of my creativity and prepared me for where I want to move forward in life. The engineering academy is so different from traditional learning; these are classes I choose, that I get to learn from, and also teach. Also, it is pretty cool that from these classes I get to say that I could use a laser cutter to create objects of my own design, and I got to spin my own fibers.”

“Mr. Reichwein, Dr. Voicheck, Miss Young, Mr. Specht, Mr. Boyer, and Mrs. Roney. Mr. Reichwein always has the best speeches about how we spend so much of our time on our phones, but he also was always there to help and work on extra design projects. Dr. Voicheck gave me the nickname of Laser Wizard (we decided together that females can be called wizards too) because I always excelled with working on the laser cutter and was always there to help other students. Miss Young because she would always chat with me about my grandparent’s company, and how my house was coming along when we were rebuilding it in Junior year. ( And of course, these conversations took place after my digital electronics work was done.) Mr. Specht because he had a new “dad” joke every day sophomore year, and I swear the jokes were so bad that you just could not help but laugh. And of course Mrs. Roney. She is a teacher I have had for all three years, my Thespian Troupe advisor, North Penn Theatre’s Director; she has always been there for me and she is one of the reasons why North Penn feels like a home.”

“Plot a path to get to all your classes, and plot a backup path. Sometimes the path you usually take may be interrupted by a convention or a closed hallway. And no matter rain or snow or shine, taking the courtyard is probably the best decision to get to certain classes on time.”

“My gym uniform. You are welcome for this gift.”