Schafsteller ready to take off after high school 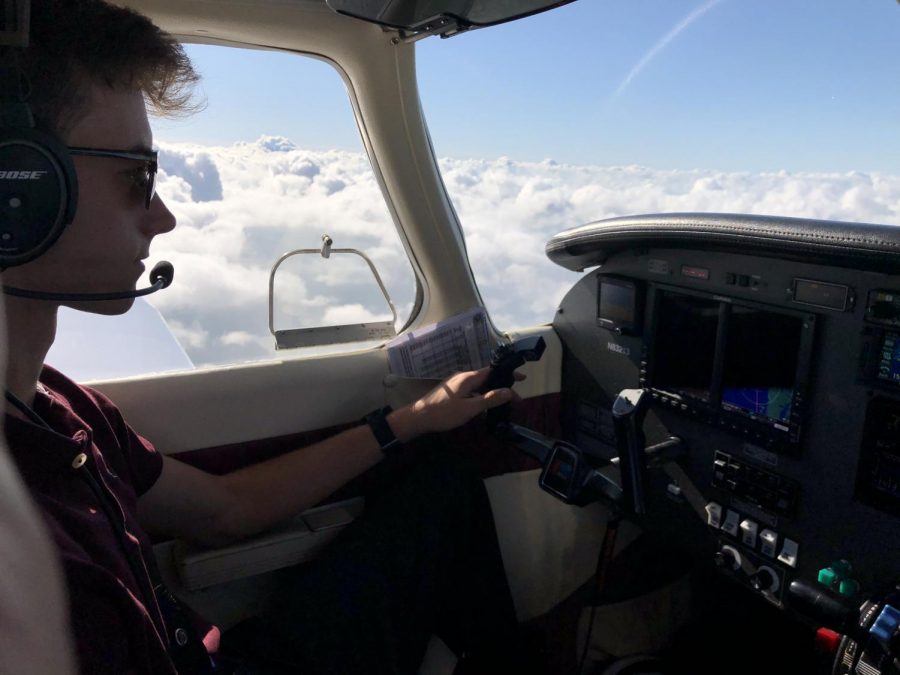 Flying high in the sky, Schafsteller discovered his passion for flying planes.

TOWAMENCIN — North Penn High School junior Karl Schafsteller watched his dad fly a plane while he sat right next to him as a child. During his sophomore year, the roles switched when his dad began to watch him take the lead.

“When I was very little, I remember my grandpa taking me out there in a small little plane, and I remember thinking, ‘Wow, one person can pilot this amazing machine that can fly in the sky.’ I remember looking down at the window and seeing everything,” Schafsteller said.

Every so often as a child, Schafsteller’s dad would take him out on plane rides to show him how it works.

“We would go up in a small plane once in a while and he would just show me the ropes on how to fly a plane. We wouldn’t go real high, just under 5,000 feet. We’d have some fun and he would do some maneuvers. We would fly around and maybe go over to some other airport to grab some lunch. It was a really cool experience and at the time, I didn’t realize that every other kid wasn’t doing the same thing,” Schafsteller said.

Flying planes runs in Schafsteller’s family as his dad is a pilot and his grandfather represented a top position for United Airlines. His mom used to work for Boeing which is a military and commercial airline company that makes airplanes. His step-dad currently works there as well.

“I’d say that my mom and step-dad make the planes and my dad flies them,” Schafstellar said.

At the beginning of his sophomore year, he began flying. Around February that year, he was able to fly around the pattern on his own. The pattern is an area at the airport where you fly in circles until you’re ready to land. By the summer, he began going up in the air on his own to other airports.

Schafsteller currently does not have his private pilot license yet, so while he can fly on his own, he needs to ask for permission from a licensed flight instructor. By the end of this summer, he will be able to obtain his license and rent or own a plane by himself.

In order to earn his private pilot license, he has to have a certain amount of hours by himself and cross country hours. Cross country hours are hours spent flying from one airport to another. He also has to pass a written test. Once he passes the written test, he will be interviewed by a flight instructor as his oral test. Then, for 5 or 6 hours, he would go up in a plane and fly with the instructor to do maneuvers and the necessities that a private pilot would have to do.

To practice for his written tests, Schafsteller uses an app that has similar questions that will be asked on the actual test. Schafsteller also takes flight lessons in Doylestown weekly.

“There’s so much to learn about flying. I’m just learning the basic parts. You have to learn instrument flying which is flying in bad weather when you can’t see. There’s commercial flying and optional things like learning to teach others. What [his flight instructors] are teaching me right now is longer flights and cross country, ” Schafsteller explained.

Most of the time he’s flying with someone else, but when he goes to practice the things he’s learned during one of his lessons, he is on his own.

Because he has to balance school and sports, Schafsteller goes out to fly once or twice a week on the weekends. During the summer, he can fly up to 3 or 4 times a week.

The best part about flying for Schafsteller is the freedom. For the most part, he can go wherever and whenever he wants. So far, he’s flown nearly 100 times.

“The freedom is the best part about flying a plane. I can go anywhere and I can go how high I want. I can do turns and see whatever landscape I want. I’m controlling the plane by myself. I’m there by myself controlling this amazing machine that nobody else thought that they could do. Flying a plane is just the coolest thing and doing it by yourself is so much better,” Schafsteller said.

“It’s an amazing feeling looking over and seeing nobody else in the airplane and thinking this is all up to me now. I can do this all by myself,” Schafsteller added.

Unlike driving a car, Schafsteller has to spend hours on the ground before he can go up in the air. Most accidents are unexpected when driving a car, but on a plane, you can plan for what could happen and prepare for it. Schafsteller has to read off of a checklist before he begins flying. He has to think about flying, descending, maintaining a certain flight level, other planes, communicating with others, and the location he’s in. And that’s only part of it.

While he’s flying, he has to communicate with air traffic control (ATC). To Schafsteller, you almost have to speak another language in order to properly and efficiently communicate well with them. Depending on where he’s going, the communication varies. If he’s practicing, there’s not much communication necessary. If he’s traveling to another place or airport, there’s much more communication.

During the summer, Schafsteller and his dad owned a plane that they picked up from Des Moines, Iowa and flew it to Hatfield, Pennsylvania.

“That was the longest flight I think I’ve ever done. We had to stop in the middle of the night to rest for that flight and pick up the next day. Between that flight and our last flight with the plane, we flew all the way to Myrtle Beach,” Schafsteller said.

Schafsteller and his dad spent the summer going to different places every week.

“My brother told me one time that he wanted to go to the beach, so we flew all the way down to Virginia. I’ve taken friends to Long Island and we’ve flown around Niagara Falls. One day we really wanted some good ice cream, so we flew up to Penn State and went to the creamery up there. While I was flying over the summer, I took the whole family with me. In retrospect, it was one of the coolest summers I’ve ever had,” Schafsteller said.

Schafsteller always knew that he wanted to become a pilot after watching his dad fly planes all throughout his life.

“I love hearing him talk about that and his piloting stories and his near-death experiences that are greatly exaggerated. I told him that at the beginning of my sophomore year, I would try [flying] out, and I went up and flew a plane. It was my first solo flight when I realized this is awesome,” Schafsteller said.

“My dad has this joke where he tells people he was just in Switzerland and he went mountain hiking and did all these cool things. And then he says, ‘You know what I call that? I call that Tuesday.’ He goes on these amazing experiences or once in a lifetime things every week. He has the opportunity to take his family out to cool places and it’s absolutely nuts,” Schafsteller said.

Once he becomes a pilot, Schafsteller hopes to go to Paris. His dad has never taken him to Paris because the flights are always full. When the flights have leftover seats, his dad gets to take his family to those places.

“I would also like to revisit the places I’ve been to as a child and explore the places in the world that I’ve never been to before. There are all these amazing things and cultures that I have yet to experience and I think that as a pilot, I’ll be able to do all of those things,” Schafsteller said.

Other than flying, Schafsteller does track and field and cross country. Running is a year-round activity for him. In the summer and fall, he has cross country and in the winter and spring, he has track.

“For running, [the boys track team] qualified for New Balance Nationals. Me and three other guys were ready to go, however, due to COVID-19, it got cancelled. Our biggest meet of our last winter season was when we got 3rd in states. We just got a notice from New Balance Outdoor Nationals that invited us to their competition in June or July depending on how long quarantine goes on,” Schafsteller said.

For most people, they view cross country and track as constant pressure and pain, but for Schafsteller, he sees it as a stress reliever.

“It is the most individual team sport there is. While you’re running by yourself, it really is a team sport. You’re with other people, socializing with other people, and doing the workouts with other people. As you’re hurting together doing these workouts, you get to know these people so much better than anyone else. You’re seeing them hurt worse than they ever could be and that is a bond that is so strong. I’ve made so many friends through cross country and track. My social life revolves around cross country and track and I don’t know what I would do without it,” Schafsteller said.

As for the future, he plans on majoring in aviation. His dream is to run and fly at college. His top 3 colleges are Embry-Riddle College in Daytona Beach, Florida, University of North Dakota, and Penn State because he would be a third generation Penn State student.

One thing flying has taught Schafsteller is time management.

“In a plane, things happen so fast. One thing you’re in the air and you’re getting ready to land and before you know it, you go through a million steps and mess up on the landing twice, but you somehow recover from it. I take that time management home and apply it to my daily living like homework and track. Being able to balance all these things at home is a lot easier now because of flying,” Schafsteller said.

To Schafsteller, flying is an experience like no other.

“It’s an amazing experience. There’s absolutely nothing like it. There’s nothing else that can make me so scared, so stressed, and so afraid, but when I’m done, I think, ‘Wow, that was the coolest thing I’ve ever done.’ I’ve never been so scared of something and ready to do it again like that,” Schafsteller said.