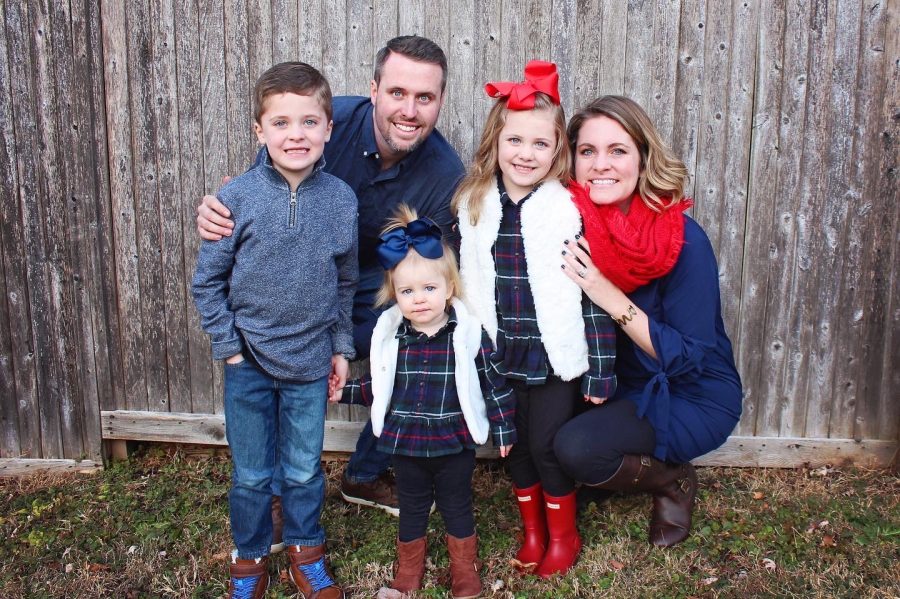 Mr. James Groff and his family posing for a family photo.

TOWAMENCIN — North Penn High School’s newest health and physical education teacher James Groff was only at school for 4 days before schools were closed amid COVID-19. He barely had the chance to meet his new students and have them learn things about him; however, in life, there’s always a second chance to do anything.

Groff decided to work at North Penn to be closer to his wife, who works at North Penn as a special education teacher, and children.

“For an opportunity to come about, it was a dream come true. It was something that me and my wife always talked about but definitely didn’t think was going to be possible. [The job opportunity] was absolutely perfect, and it helps my family tremendously,” said Groff.

After his first impression, he loved the school for the atmosphere, the activities that were being held, and the sense of community. With his wife already working there, he had a good idea of what it would be like beforehand.

As for his goals for the rest of the school year, he had initially planned to take some time to get to know his students and have them get to know him. However, distance learning has made it quite difficult.

“I’m really big on that student-teacher connection and building rapport with my students. That is something I would like to try and do even with distance learning. I want them to get to know a little about me and I want to get to know them so that when I see them around the building next year, even though I might not be teaching them, I want them to be comfortable with me,” said Groff.

Prior to working at North Penn, Groff worked as a health and physical education teacher at the Philadelphia School District for 10 years. He taught students from Kindergarten to 12th grade.

“It was the first school district I worked at. Being a young teacher in Philadelphia, they move you around a lot, so in my 10 years, I actually worked in 6 different schools. My longest tenure was at a K-8 school called Thomas K. Finletter Elementary, but I’m coming from a high school called Building 21 where I was the only Health and P.E. teacher and athletic director,” explained Groff.

His time working at Philadelphia was well spent. He spent a lot of time developing athletic programs at the schools he worked at.

“We are very fortunate at North Penn to have a whole bunch of sports that you can choose from, but in the city, it’s a bit different. You have to build a program from scratch, so it’s a bit difficult. Many coaches don’t stay with the program, they have a tough time, or they’re tired. It was my goal at my schools to try and develop an athletics program that was consistent and standing strong. My biggest impact at my schools was at my middle school when I started the whole athletics program, and they now have 10 sports at their school that the kids can choose from and play. At the high school I just left, I tried getting the kids to play different sports with the options that they had. I loved it and I wanted to build an athletics program for the kids so they could be active after school. I wanted to give them something to do instead of going home, and I wanted them to stay at school for as long as they could and athletics was my way of doing that,” explained Groff.

Some of his best memories spent at his middle school was when he was a part of the students versus staff basketball game at the end of the year at their local recreational center.

The Philadelphia Phillies had a program where the Phillie Phanatic would come to a school and a teacher would be selected to read one of his books in front of the students. He was the teacher that was selected one year, and he had a great experience being a part of it.

“The Phillie Phanatic did some silly things like putting a hat on me and was hitting me with his belly, and it was really enjoyable having the entire school in the audience listening to me read and the Phanatic poke fun at me. It was a pretty awesome moment,” recalled Groff.

At North Penn, students living in Lansdale and the surrounding areas would attend North Penn School District. For schools in Philadelphia, students can apply to certain schools similar to how you would for colleges. Because of that, he had students from different parts of the city, but the schools were also much smaller than North Penn.

“The one thing that I kept telling my students at my last school was that I’m only one teacher for 300 students, but I’m going to a school with 3,000, so that was something that they found amazing,” said Groff.

Other than the class size difference, Groff noticed the different energy levels present in gym classes.

“I’m used to kids with extreme energy levels and having to tone down their energy levels in gym class to get them to listen. Something I noticed at North Penn was that everybody seems to be pretty good listeners and I had to pump it up. That’s something I want to bring in to North Penn: my excitement for phys-ed and my enjoyment of teaching health. I want to pump you guys up a little bit because you guys were very good listeners but also very chill,” said Groff.

Groff also has to adjust to a new schedule. There are so many various schedules with different things going on each day.

“What I was telling my students my first week was the thing that they were going to have to help me out with was the different schedules. The schedules are crazy and there are so many of them,” said Groff.

When he left his old school, it was a very “interesting” last day. With a lot of emotions coming from himself and his students, it was difficult to say goodbye.

“Students sometimes rely so much on you. You don’t realize how much your impact has on them and it was really nice on that final day with how many kids came up to me to say goodbye and how much they were going to miss me. It was very emotional for me that last day even though it was so fast. It was very emotional leaving that school district that I put my heart and soul into for 10 years. Hearing those kids tell me how much they were going to miss me was very special, and it was hard leaving 10 years of my life behind but I’m still crazy excited to be at North Penn,” said Groff.

Before Groff became a teacher, he attended West Chester University and majored in Health and Physical education. Initially, he went to school to become an engineer, and despite knowing it would consist of a lot of math, he realized that he didn’t want to do math for the rest of his life. He took time to figure out what he was good at and found that, as a kid, he loved to help his friends in his neighborhood with sports.

“We always played a lot of sports and I had a lot of kids in my neighborhood growing up and we were always outside doing something whether it was playing basketball, baseball, football—we were always playing something. I always enjoyed trying to teach the younger kids in my neighborhood how to play, and I kind of knew that sports was something that I not necessarily excelled at but was good enough to play. It was what helped me make a lot of my friends in school, so I kind of ran with that idea and was like ‘okay, so how can I take sports and teaching kids and making an impact,’ and that was the first thing I thought of: physical education. I transferred over to West Chester from Penn State,” explained Groff.

After switching his major in college and working as a teacher, he realized he had a passion for physical education.

Groff’s favorite thing about being a teacher is the connection between teachers and their students. He loves coaching and staying after with his students.

“I always tell my classes that I’m here to keep you safe, have a little fun, and have you take a little knowledge away after my lesson. I know that there are some students who are not too big of a fan of physical activity, and I really like to challenge that and let them know that it’s not just a push-up test, it’s having fun, moving a little bit, and learning about how to take care of your body,” said Groff.

Teaching for 10 years has taught Groff how to be more outgoing. In high school, he was an introverted student and it was to the point where he received a superlative award for being the shyest kid during his senior year.

“Now when you see me while I teach, I am definitely not shy. I am very outgoing. Teaching has pushed me in the opposite direction and also show the quiet individuals in class that ‘look, you can become passionate in something and push yourself but keep who you are inside,’” said Groff.

He also learned that every student goes through something different and learns in a different way.

“Each student is an individual. That’s something when you first get into teaching is very difficult to figure out. You just want to teach your lesson the way that you have it in your head, but you’ve got to realize that it’s not going to go that way. Each student is going through a different thing. One student might be going through a really bad day and they just don’t want to come in and learn that day and others might be having the best day ever and they might go and answer every single question. Each student learns in different ways. One thing that I learned is that I need to be aware of my students: how are they feeling? What are they going through? How can I best reach them that day with my lesson? My students are all individuals and they’re all going to learn in different ways,” said Groff.

Outside of school, he has 3 kids and one more on the way. His wife is due in September.

For hobbies, his life revolves around sports whether it is watching, playing, or teaching it. He enjoys going to different sporting events with his family and coaching his kids in baseball and soccer.

As soon as things get back to normal and he is able to teach students in person again, he hopes to build strong relationships with his students and let them have fun with his lessons.

“It’s important to be serious about your schooling and grades, but you should also come to class and have some fun. There can be enjoyable ways to learn. Let’s learn something for the day, take it serious, but also have some fun,” said Groff.