Debbie and Rachel: Partners in grime 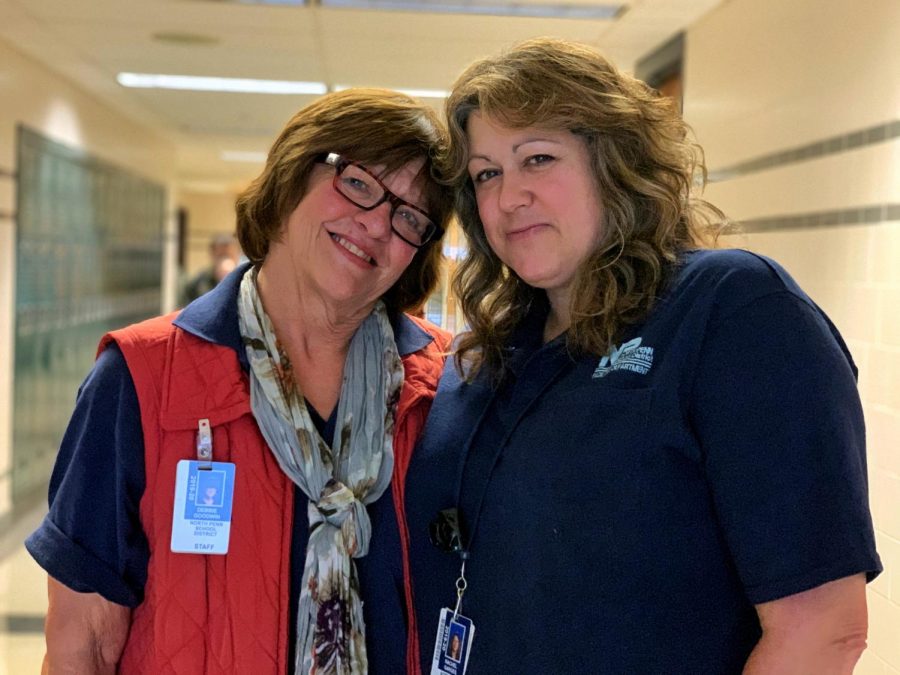 Debbie Goodwin (Left) and Rachel Garges (Right) have been coworkers and best friends for 23 years.

TOWAMENCIN — It’s fifth period, and there’s a massive coffee spill in B-pod. There’s only 20 minutes left in the period, but you’re stuck in 3rd floor K-pod cleaning up another mess. For Debbie Goodwin and Rachel Garges, that scenario is an easy day.

Goodwin and Garges met during summer cleaning 23 years ago have been working together since. They began working at North Penn High School, but later Goodwin branched to Penndale Middle School and Garges branched to York Avenue Elementary. Once K-pod was built, they came back to the high school in 1999.

Since then, things have changed – they originally had Connie, another custodian, working with them. They work from 8 AM to 4:30 PM. For the past 8 to 9 years, it’s also been a lot more work for the two.

While they worked at Penndale Middle School and York Avenue Elementary, they worked night shifts, whereas now, they work days and nights and even during the summer.

At York Avenue, Garges worked by herself, so she had to clean the whole building. At Penndale, Goodwin had to deal with the chaos of a middle school, so she had a long list of responsibilities.

“That age group is quite crazy,” Goodwin joked, “there were a lot of things to clean, and the middle schools are just tough.”

“It depends on the morning—if everybody is feeling well,” said Goodwin. “If it’s closer to the marking period, the proms or dances,” added Garges.

Their main job is to ensure that everything is set for the day, and if there’s a mess that they have to clean, they get called on their radios and have to get there as soon as they can.

“We pretty much just come in and set up the bathrooms for the day, and make sure you guys have toilet paper and paper towels—everything is cleaned. As the day goes on towards the afternoon, it’s set up time. We have to get the cafeteria ready because there are setups for meetings or whatever is going on. We set up the gym for all of the sports. A normal day here is very busy,” said Goodwin.

“That’s why we have to wear these radios because we get called to go clean up something,” added Garges.

“We have to make sure that if there’s any blood that needs to be removed that we disinfect it immediately. We need to get the bathrooms ready before the bell rings,” said Goodwin.

They also clean the stadium restrooms and the pool. The two have certain areas that they are responsible for each day, and if one of them is not there that day, the other one covers for them.

“[Gino Santoro, Garges, and Goodwin] have the responsibility of the whole building to try to make sure that all of the bathrooms are prepared, and make sure nothing happens as far as accidents,” said Goodwin.

“And also the safety of you guys. We make sure that the doors are locked,” said Garges.

“We’re always in the hallways with our eyes and ears open all of the time looking for anything,” said Goodwin. “You can’t get by us, that’s for sure,” Garges joked.

Despite being busy all the time, the two still love their job, mostly because of the students.

“We do it for the kids. We love this,” said Goodwin.

“The teachers, when you guys have off, are like, ‘oh you’ll have a quiet day,’ but I’d rather have you guys here,” added Garges.

“We are here to make sure you guys get a great education, and we do everything we can to make it as smooth as possible,” said Goodwin.

“It’s nice when there’s a lot of kids that do appreciate us, and they tell us, they thank us, and they pick up stuff,” said Garges.

“We see a lot of students who have graduated, and they come back as teachers or part of the district which thrills us because we saw them when they were younger,” said Goodwin.

As for their friendship, they have been best friends ever since they started working together. They go on trips and hang out.

“We do spend a lot of time together and share a lot of special things which is wonderful to work with someone you care about so much,” said Goodwin.

A few of their favorite things that they love about the high school and their job are the light bulbs that the SGA puts up around the holidays. In the summer, they enjoy their Fridays off, because they finally get a break – summer cleaning is hard on their bodies. They also enjoyed the time when they made snowmen that they sold during the holidays with the special education students as well as now-retired Mary Wilson, who was a special ed teacher. They would be invited to their Christmas gatherings and participated in the activities they had.

“Even if it was only ten to fifteen minutes, we try to squeeze between a break or come in early just to be a part of all that,” said Goodwin.

As for the challenges that they face every day, they have to deal with the long days and weeks of work, which can be tiring. They have to make sure that their health is in check because of the amount of work they put their bodies through.

“We try to make sure that we get through the day. By Wednesday, we’re very tired, and it’s because we’re on our feet a lot. The summer cleaning really knocks us for a loop because we’re using our bodies so much. That’s why we take shorter weeks during the summer. When you use your body a lot, it breaks,” said Goodwin.

To add on to the long days, they have to prepare for all of the events that are held at school, clean things up between classes, and make sure that they get everything done as fast as they can.

“We’re smiling on Monday. By Wednesday, we’ll be like ‘we’re so tired,’” Goodwin joked.

After all of the work that they do each week, they’re in desperate need of a break. The holidays give them the long-awaited break they deserve.

Despite it being such an arduous job, they appreciate every week that goes well, and if the week happens to not be so great, they look forward to the next.

Outside of work, they enjoy water aerobics. Goodwin enjoys spending time with her grandchildren; she babysits them several times a month. She loves attending their sports games and planning events for them. As for Garges, she enjoys gardening, fishing, and going up to the Poconos. She also loves caring for her golden retrievers.

“I told [my boyfriend] this morning that Moose (her dog) wants a little brother. They’re like potato chips. Once you have them, you need more,” said Garges.

The most rewarding part of their job is to have students appreciate what they do and see them as more than just the custodians.

“There were some girls that came in, none of them wanted to be here, and when they saw one of us they said, ‘it’s the nice lady in the bathroom, I think I’ll get through the day.’ We’ve had many people say that several times. There had been times where some girls would come to us and speak to us about certain things and we would drag them in the right direction. We are not just custodians, we are here in every way,” said Goodwin