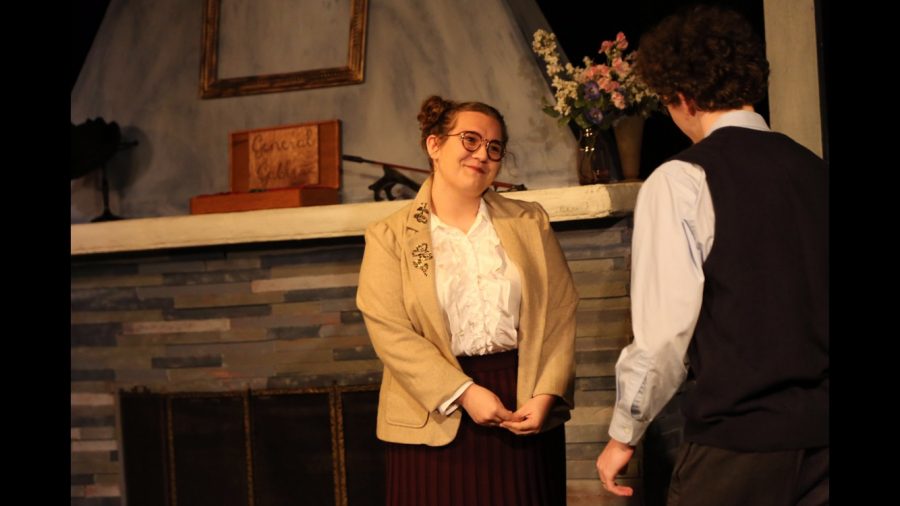 For some North Penn Theatre stars, they end their acting career when the curtain closes on their senior show. But for Class of 2018 alum Haley Simmonds, a new curtain opened shortly after her time at North Penn ended. Simmonds is currently a sophomore majoring in Theatre Arts at Montgomery County Community College.

“Theatre at North Penn was one of the most incredible experiences! I became so close with so many people and we all got to build a show together. That process gives you the most fulfilling feeling and sense of pride over your work that is so important for students, whether you’re an actor or apart of one of the crews it’s just incredible. It shows you that hard work pays off,” Simmonds reflected.

Simmonds’ dedication to theatre paid off, as she was one of the recipients of the 2019 Theatre Arts Merit Scholarship at MontCo. Also at MontCo, Simmonds has played Juliana Tesman in Hedda Gabler (in which she was also co-dramaturge) and Edna in Mr. Burns: A Post Electric Play. Simmonds is also the chair of Public Relations on the board for MontCo Drama Club, which means she runs social media and marketing for MontCo’s shows.

Simmonds continues to be involved with the North Penn School District, as she returned for the Reading is Fundamental play put on for all the first graders from across the district in 2018 and 2019.

“I did it senior year and then they invited me to come back. I LOVE getting to talk to the kids after the show and get them to love reading!”

Here at NPHS, Simmonds was involved with all the plays and musicals and was a Triple Honor Bar Thespian. She was also involved with Chorus, Women’s Choir, CMT, and Green Room Club.

“I had a blast in every single one of these and miss them all so much! I was so lucky to get to participate in these programs at North Penn. Green Room Club is an amazing group and being President of the club exposed me to many different professional theatre productions and helped me develop a sense of leadership,” Simmonds said.

“CMT was a fantastic class and I learned so much about music and performing in that class. It allowed me to explore different types of music and create something amazing that I was proud of! It was a huge process but it the end it was so much fun to share all of our hard work at the concerts,” she added.

My favorite part of college life so far is definitely the theatre program here. I’ve made so many new friends and learned so many new skills in such a short time!

I miss the people the most. North Penn had such a sense of community and I loved getting to meet so many new people! And at the same time, so many of the teachers have inspired me and have had a huge positive influence on me. I’ve learned so much from them about various subjects and about myself. I miss seeing them around the building and getting to talk with them.

Take time for yourself to figure out who you are! Don’t try to force yourself into a mold because that’s what other people expect you to do! There is only one you and no one but you can show the world what you have to offer! Be brave and take risks and most importantly stay true to yourself.