NP grad Erin Morrissey proving life is what you bake it 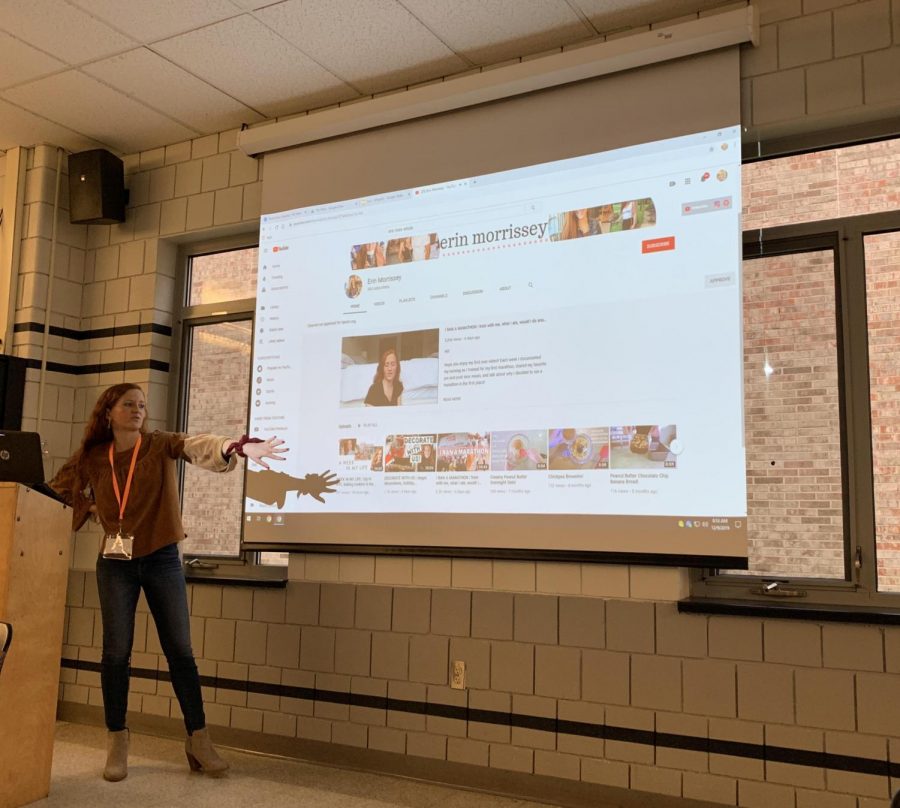 NPHS grad Erin Morrissey talks about here journey from helplessness to success. Morrissey presented her story to a group of Women's Voices students at NPHS on Monday, December 9, 2019.

TOWAMENCIN- “I left Penn State on Wednesday, was admitted to an out-patient center for eating disorders on Thursday, and got sent to the E.R on Friday.”

Born and raised in Harleysville, North Penn Class of 2011 Alum Erin Morrissey visited her old stomping grounds on Monday, December 9th, to talk to the students enrolled in Women’s Voices about her past experiences battling eating disorders and how she turned her unhealthy habits into a successful media business.

Morrissey’s teenage years were as normal and ordinary as it can get; her parents worked during the day and they ate dinner together every night around the dinner table, she played almost every sport under the sun, attended church, and experienced the same stresses that high school teenagers face every day. In the shadows of her older brother, Morrissey felt the pressure not only from her parents but from herself to succeed.

“When I went to high school, I continued to feel the pressure [from myself]. School didn’t always come easy to me,” Morrissey remembered.

As the stress and pressure added on, Morrissey made sure there was nothing lower than an A on her report card. She eventually applied and attended The Pennsylvania State University as an undecided major, unsure of what she wanted to do with the next chapter of her life.

“I had absolutely no idea what I wanted to do with my life, I felt so lost,” Morrissey stated as she recalled beating herself up for having no desire to pursue any career.

Throughout her first year at Penn State, Morrissey found it hard to find a group of friends to stick with, envious of other girls who made it look so easy to find their niche. Morrissey regretted not participating in greek life but was too scared to be told she wasn’t good enough by the top sororities on campus. Between switching majors, not having a group of friends, and the thoughts of not being good enough, the pressure started to build up.

“I put so much pressure on myself to try to figure it all out. The pressure started to manifest and I channeled that anxiety through health [and fitness], or what I thought was being healthy,” recalled Morrissey.

Over the summer, home from college, Morrissey started going on runs, working out, and restricting her diet. Over those few months, she would only agree to eat at healthy restaurants and would run that extra mile every day and work out more to the point that she returned to school much thinner than when she left.

“Naturally, the weight came off really quickly, and I was shocked at the amount of attention I was getting. I finally felt like I had control of something in my life,” Morrissey claimed.

Then it took a turn for the worse. Hoping that she would be picked by the best sorority since she was skinnier than ever, Morrissey’s self-confidence and esteem plummeted as she got rejected. Her excessive weight loss got so bad that her parents had to pull her out of school and admit her to an out-patient center for eating disorders where she was then admitted to Children’s Hospital of Philadelphia for 12 days where she stayed on permanent bed rest out of the fear from doctors that her heart would collapse and stop beating.

“It was the one thing the perfectionist in me knew I could control the outcome of. I took it too far. I remember laying there feeling hopeless, and that these things shouldn’t happen to someone like me,” Morrissey stated in the silent room of shocked students.

Discharged from the hospital, Morrissey started her long process of recovery. During those 12 months and then some, Morrissey went through treatment, therapy, meetings with nutritionists, and the long process of learning to love her body again. Even after she graduated from her out-patient program, the recovery process didn’t stop there. It’s a lifetime of her learning and trusting to love her body and mind again.

It was a new start for Morrissey. Instead of returning to Happy Valley, she decided to stay closer to home and attend Temple University. She also turned her undecided major into a major in Public Relations where she found her passion for media. Morrissey fell in love with Temple as she found a group of friends, got internships, and even lived on campus her last year. After graduation, Morrissey entered the corporate world and started working. But something was missing. She found herself reading blogs and checking Instagram instead of doing her work. Outside of her day job, she found a love for baking,  but not just your ordinary brownies in a bag where you add eggs and milk, she started creating her own healthy recipes like brownies made out of chickpeas. Her love for making her own healthy recipes grew and her kitchen turned into her own bakery and therapy session.

“I used the time in the kitchen to heal my relationship with food,” Morrissey claimed.

In 2017, Morrissey’s mother said the words that changed her life, “you should start a blog.” So in April of that same year, Erin Lives Whole came to life. She started out with a small following where she posted mediocre pictures of her recipes. Morrissey started to gain more followers as she was consistent with uploading content to the site, and people just kept coming back for seconds. After a year of Erin Lives Whole, Morrissey made the important, yet difficult decision to leave the corporate world to pursue the blog full time because she would “ kick [herself] if she didn’t try.”

Jump forward to today, Morrissey runs her own media business with more than 128,000 followers on Instagram. She has worked and will continue working with brands such as Whole Foods and Panera Bread and continues to follow her passion for media, blogging, and healthy baking. Some may think “she’s crazy, why would she leave a corporate job to start a blog?” Well funny enough, Morrissey actually earns more than she would’ve at her corporate job and even brings in more than her boyfriend who is an engineer at a high-end company.

Morrissey’s journey wasn’t easy. It wasn’t pretty. It took a lot of time, reflection, failures, and sacrifices. She learned her self worth and educated herself on the right way to be healthy, and not just a healthy body, but a healthy mind. She turned one of the darkest times in her life, where she was at the foothold of almost killing herself by what she was doing, to creating it into something beautiful, something worth talking about.

“It’s my story; I’m not ashamed. It could happen to anyone, eating disorders don’t discriminate. My platform allows me to bring attention to eating disorders and to show that recovery is possible. Everything in my life happened for a reason; if I never left school for treatment, Erin Lives Whole wouldn’t exist,” concluded Morrissey.