“By the end of this, I’m exhausted”: Kirsten Mayland finds her passion running in nature 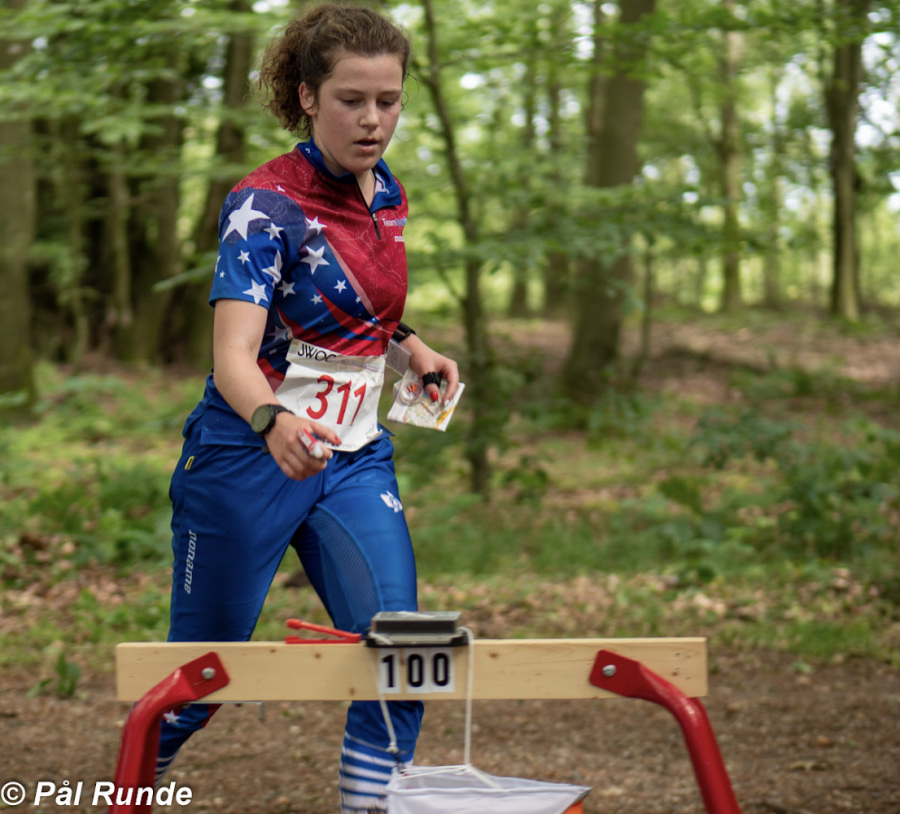 Kirsten Mayland competing in the Long race at JWOC.

TOWAMENCIN — When we find ourselves in an unfamiliar location, we immediately rush to Google Maps to help find our way out. For North Penn High School junior Kirsten Mayland, that decision has never crossed her mind.

Orienteering is a primarily a European sport, originating as military training, that involves racing and navigational skills. It was brought over by Finnish teacher Piltti Heiskanen who organized the first orienteering event at Dartmouth College in Hanover, New Hampshire.

Orienteers are given a topographical map and a compass that allows them to navigate from point to point in unfamiliar terrain. Whoever has the fastest time wins.

Participants are also put into teams, however, they compete individually and begin on their own without the influence of others. Teams are essentially there for points and support.

Mayland’s mother was the one who introduced the sport to her. She had been orienteering since high school, and once Mayland was born and was able to run, her mother brought her along in the woods. At around 10 years old, Mayland began to run courses in which her parents followed her to make sure she wasn’t going to get lost. At 12, she ran courses on her own.

“I think it’s just building up to it; there’s different levels of difficulty, so you could start on what are called white courses which are all on trails, so then you just need to use that basic knowledge like ‘oh, I should turn right at this trail junction.’ It’s also sort of like some people could read and walk and just being able to process what you’re seeing while being able to move, so it’s just building it up that skill,” Mayland explained.

At first, orienteering was just a hobby, and Mayland went through a period of time where she debated on continuing, but after watching others participate in the National Junior Program perform at world levels, she decided that it was something she wanted to do.

“It’s not very popular in the U.S. which meant that for my level of skill, it was easier for me to get on the program. I was just in the Junior Development Program, not the Junior National Program. I just needed to go to team trials and the cumulation of races is what allowed me to go on the team,” explained Mayland.

In order to get on the team, you must have a U.S. citizenship. The majority of the team live in the U.S., however, some members of the team are in college and live in Canada, Scotland, Sweden, or Norway. In the U.S., there are people living in the West Coast around Seattle and then some in Boston.

The courses are of different lengths. For runners, a 10 minute per kilometer pace is considered a good time. As for shorter courses, it should take around 20 minutes to complete, but the timing varies depending on the size of the course.

Mayland has been on a course for over an hour before, but it also came with getting lost along the way.

“I was probably thirteen, and I was on course and decided that this was just too much and I’m going back. I thought that I could just cut through this stretch of forest, and I hit another trail, but then I just kept walking. It was probably 20 minutes in, and I was like ‘what the heck is happening?’ It’s pouring rain, and it was the middle of pollen season, so my pants never got unstained yellow, and I was just trying to suppress the mental breakdown, and then finally I’m like ‘I don’t know where I am,’ so I just walk back, and that was just forty minutes, and then I show up at the finish, and my mom was like ‘I was about to go looking for you,’ explained Mayland.

“For everyone who is afraid of getting lost, there are those different  levels. There’s the short courses that are 2 kilometers all on trails, and you’re not going to get lost and even if you do, we know where you would’ve went and we could go find you. Once you’re comfortable, you could move up, so it’s not like we’re just throwing you out in the middle of the woods and just saying ‘go find your way out,’” said Mayland.

“There’s usually what’s called a safety bearing. That’s if you take your compass, and you just walk north, for example, you’re just going to hit the edge of the map which is marked by some obvious feature like a road. Once you get to the road, you may not know where you are on the road, but you could find your way back from there,” explained Mayland.

Mayland competes for local events every weekend to train for major competitions. There are 8 different types of meets which are nationally ranked. There are a Fall and Spring season, and Mayland gets to attend 2-3 each season.

“Depending on the weekends, it can be an entire weekend thing—36 hours—driving up to the meet wherever it is. The majority of them are probably 5 hours on the weekend. I also like to help out and pick up controls,” said Mayland.

“With orienteering there is the physical and navigational side, so we’re pretty much on our own to train physically and that’s why I’ve been doing cross country and track, but then navigationally, our coaches send out maps, and we’re supposed to go on runs with them and just fill out whatever little exercise there is on the map which helps train your brain while you’re working out. You can train your mind to process that information faster and make better decisions [while running on through the terrain]. Physically, we’re on our own and navigationally, we just do the maps that are sent out,” explained Mayland.

“There are also Armchair orienteering where you just sit and do it. Basically, the best training you can get is just going out there and orienteering, but as we’re in the U.S., we usually only get opportunities to orienteer on the weekends, so these provide extra brain training,” added Mayland.

During the summer, Mayland had the opportunity to compete in Denmark with the U.S. Junior Orienteering Team for the Junior World Orienteering Championship. On the team, there are 6 female athletes and 6 male athletes.

Last year in April, Mayland competed in team trials and managed to get the last spot. In early July, she flew to Denmark and was there for 2 weeks.

“My dad and I flew out a little early just to see Copenhagen. Our flight got delayed 26 hours, so my dad and I had a nice time wandering around New York,” said Mayland.

The first week was for training which allowed the participants to get familiar with the terrain and to do activities. The second week was the competition that consists of 5 races: a sprint race, a long, a middle-qualifier, a middle-final, and a relay.

“I ran in all 5, and by the end of this, I’m exhausted—this has been a lot of racing. I placed okay—I placed fine for my age because I was sixteen when I was racing, and you could be up to twenty. There were always a couple people below me—twenty or so, but the majority of people were beating me. Nonetheless, it was a lot of fun, and I didn’t get lost as often as I thought I would,” said Mayland.

In Denmark, the team competed primarily against the Scandanavian countries, but they also competed against China which had a Chinese and Hong Kong team, Korea, Israel, and Moldova. They also had the chance to become friends with the South African team.

“It makes the world a lot smaller knowing that you have people that you could text who live across the world. The fact that you have friends in different places that might at first seem very different, it just brings the world closer. Also just with my team itself, I love the sense of family we’ve developed; we have calls where we just catch up, and it’s really nice,” said Mayland.

“I love nature. It’s really nice to have that excuse to go to all of these places and run through the forest and see all the different terrain. I like being active, but I don’t like just being stuck in my head. I love that orienteering allows me to find that balance between physical and navigational. It’s one of those sports where you’re able to use your brain, but it’s not just a thinking sport, it’s also running sport, and that uniqueness is incredible,” said Mayland.

“I’m pulling orthographic imagery off of USGS. I’m using that as a template. Then, I’m also using open street map which has the building outline. I’m putting that all into Openorienteering Mapper, and then hand drawing it,” said Mayland.

“As of now, I’m currently one of the only people here who knows what [orienteering] is, so I would like to start small and just use it as more of a training to just teach people ‘this is how you read a map, this is what a compass is, this is how you use it, this is how you go about running a course.’ If that interests them enough if they want to continue, just telling people ‘my current local club is Delaware Valley Orienteering Association, we run meets every week,’ and just giving them that information to be able to go out there on their own. If it does pick up steam, maybe we could actually take people,” said Mayland.

If you’re interested in being a part of Kirsten’s orienteering club, you can contact her through email: