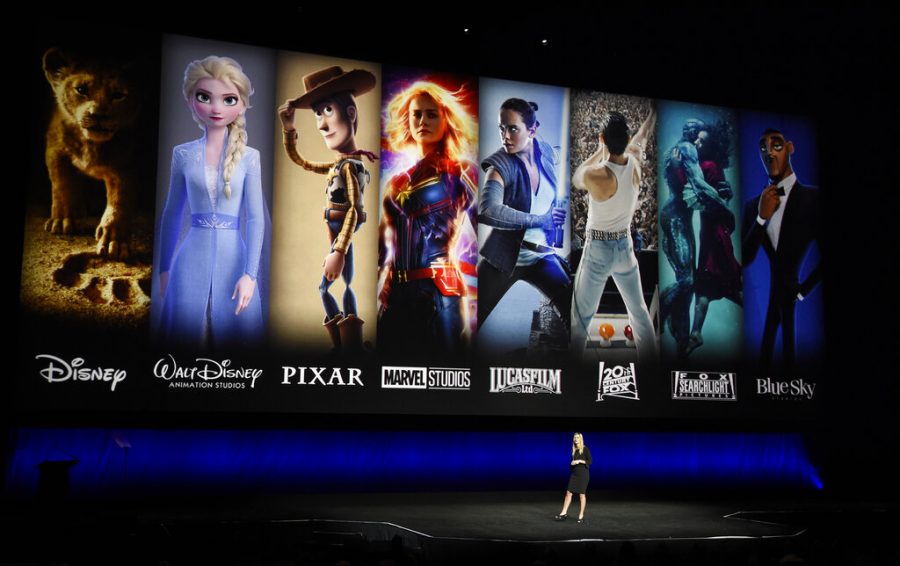 FILE - In this April 3, 2019, file photo characters from Disney and Fox movies are displayed behind Cathleen Taff, president of distribution, franchise management, business and audience insight for Walt Disney Studios during the Walt Disney Studios Motion Pictures presentation at CinemaCon 2019, the official convention of the National Association of Theatre Owners (NATO) at Caesars Palace in Las Vegas. On Tuesday, Nov. 12, Disney Plus launches its streaming service. (Photo by Chris Pizzello/Invision/AP, File)

When I first heard that Disney was launching its own streaming service and “opening the vault”, giving viewers access to long lost and exclusive content, I just could not handle it. I am a huge Disney fan, so I knew that I was going to lose my mind and be totally overwhelmed by all of the movies and TV shows that would be available.

It was better than I ever could’ve imagined. Now, it just launched yesterday, so I have only just begun to discover all of the amazing content, but here are the ten best things you should start bingeing right now.

Although Disney Plus is home to thousand of classic Disney films and shows, they do have a multitude of brand new series for viewers to experience. A live-action remake of “Lady and the Tramp”, “High School Musical: The Musical: The Series”, “Noelle”, and “The World According to Jeff Goldblum”, are just a sample of all the things that viewers can’t find anywhere else.

9. Disney Through The Decades

Disney Plus has a section devoted to highlighting Disney films, shows, and short films from the 1920’s until present day. You can find things such as “Three Little Pigs” from 1933, “The Three Caballeros” from 1945, “Bedknobs and Broomsticks” from 1971, “The Mighty Ducks” from 1992, and “Alice in Wonderland” from 2010.

Over a dozen of Marvel’s most iconic movies can be found exclusively on Disney Plus. Marvel fans can binge “Avengers:Endgame”, “Captain Marvel”, “Gaurdians of the Galaxy”, “Iron Man”, and many more.

Besides the Fab Five(Mickey, Minnie, Donald, Goofy, Pluto), I would argue that Kermit the Frog, Fozzie Bear, and Miss Piggy are among the most beloved and internationally known characters from the “House of Mouse”. You can relive some of their greatest moments in “The Muppet Movie”, “Muppet Treasure Island”, “The Muppet Christmas Carol”, and “The Muppets”.

Disney Plus is home to all of the original Stars Wars films, from Episode IV: A New Hope, through Episode VII: The Force Awakens. To be honest, I do not like Star Wars, but a combined over 15 hours of content is a dream come true for the most devoted of fans. Plus, you can find the highly anticipated Disney Plus original series “The Mandalorian”.

I can’t make a list of Disney Plus content without recognizing all of the beloved Disney movies that can be found on the streaming platform. It would be truly impossible to list all of the movies, but just a few of the timeless films available are “The Lion King”, “Hercules”, “Mary Poppins”, “101 Dalmatians”, and “The Little Mermaid”.

Pixar has become synonymous with the Walt Disney Company since Disney acquired Pixar back in 2006, and has produced some of the most beloved Disney films of all time. From the “Toy Story” and “Cars” franchises to stand alones like “Inside Out”, “Up” and “Brave”, Disney fans far and wide are set for life.

Presented by Kristen Bell, Encore! features a former cast of a high school musical production, and reunites the now adult cast to put on their show one more time. You can watch a new episode every week, starting with Santana High School’s Annie.

There are few things that I love more than jamming out to some iconic Disney music. With movies such as “High School Musical”(and HSM 2 & 3), “Teen Beach Movie”(and “Teen Beach 2”), “Camp Rock”, “Lemonade Mouth”, and “Descendants”, I can get my Disney music fix for life. And let’s be honest-who among us hasn’t felt the need to belt out “Start of Something New” or “This Is Me?”

“That’s So Raven”, “Hannah Montana”, “The Suite Life of Zack and Cody”, “Wizards of Waverly Place”, “Jonas”, “Jessie”, and “Shake it Up” are just SOME of the nostalgic Disney Channel shows we all grew up watching. I mean can it get any better than that?!?