From band to orchestra and chorus, Pelletier is playing his way to a bright future. 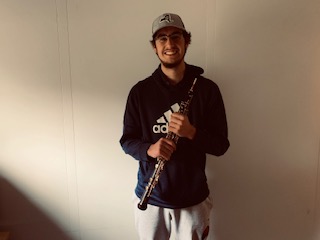 Evan Pellitier shows off his oboe.

TOWAMENCIN – “Hard work beats talent” is a phrase many people live by. But it also explains why one North Penn senior has the constant mind of musician. Evan Pelletier expresses himself through the power of music, but his ability to play an astonishing amount of instruments in addition to using his vocal cords comes from the work he puts in every day.

Commonly known as “music man,” Pelletier embraces his title. When he was very young, he could detect sounds at a perfect pitch, which kick-started his music career. He described how, in kindergarten, when a bell rang, he was able to notice that the bell sound was the exact same as the “B” note on the piano. Having the ability to detect different sounds is what caused Pelletier to pick up many different instruments.  Due to his love of music, he called himself the “music man” because it is the name of one of his favorite musicals. He does not completely remember the musical – it’s been so long since he has seen it – but all in all, the name “just stuck,” said Pelletier. (His Instagram username is “@music.man17.”) When asked about the significance of the number 17, he explained, “the number always used to change on my birthday every year to correspond with my age, but now it’s just 17 because it correlates to the amount of instruments I played and/or currently play.” Yes, Pelletier has played 17 instruments, including oboe, English horn, bassoon, alto saxophone, tenor saxophone, baritone saxophone, soprano saxophone, E flat clarinet, B flat clarinet, bass clarinet, piano, ukulele, guitar, bass, trumpet, tuba and trombone. “Technically, I only focus on 14 or 15 of them, but I have learned and know how to play all of them,” he said. While that’s incredible in itself, Pelletier has shown no sign of slowing down, either. He is currently learning to play the flute, violin, viola and cello, and he would like everyone to know that singing counts because “your voice is also an instrument, as your vocal cords are like strings.” his first instrument was the piano; today, however, his main instrument is the oboe, which he started playing in fourth grade.

While Pelletier is still a part of the band, he has been doing a lot more music during his senior year. He is a part of the orchestra now as well, due to a rule allowing wind instruments to play in the orchestra. He hopes to join Regional Orchestra in the future, and he currently wants to keep exploring new instruments and practicing every day. Pelletier is also a part of a professional ensemble known as the Philadelphia Wind Symphony. He describes playing with the Philadelphia Wind Symphony as very difficult – the ensemble only had three rehearsals before their first concert. Pelletier’s teacher, the president of the symphony, encouraged him to try out; fortunately, he got the role.

“It’s been an amazing experience to have professional musicians all around you,” Pelletier said. He also traveled with the North Penn Chamber singers to Temple University to perform a variety of college-level music. He “enjoyed every minute of it,” and it is only his second year singing.

While Pelletier has accomplished a lot in his musical career so far, there have definitely been a lot of hardships he has had to face. One of his most recent setbacks was not making the Wind Ensemble in tenth grade. He states that he was “very cocky” and believed that there was no other oboist better than him. Pelletier and another oboe player are now in the Wind Ensemble together, and described her ability to play as “amazing.” Pelletier never wanted to face the fact that he did not get into Wind Ensemble, even occasionally blaming his instrument. His current teacher pushes him to improve and gives him the advice “it’s rarely the instrument, it’s always the player.” Not making the wind ensemble in tenth grade motivated Pelletier to practice more. Practicing up to two hours a day, the previous North Penn band director knew how hard he had worked and gave him the chance to be a part of the Wind Ensemble in his junior year.

While Pelletier has a deep passion for music, his extra-curriculars don’t stop there. He has played a lot of sports while doing music as well. In middle school, he played soccer, basketball and track. Pelletier stopped playing sports once he entered high school, but he participated in North Penn’s Marching Knights in his tenth and eleventh grade years. He explained that participating in the marching band was “very tough.” He said that a lot goes into marching band when it comes to memorizing songs, learning footwork and being on time with your visuals. Pelletier became involved with other musical programs, which is the reason why he is not a part of North Penn’s Marching Knights in his senior year. But in all, he said that he had “a great experience doing it.”

After high school, Pelletier hopes to attend either Duquesne University or Appalachian State University to pursue his career playing oboe and major in music education. He says that the best advice he could give to anyone is to always work hard and follow your dreams. He hopes to inspire others to work hard by following his passion for music.

Said Pelletier, “it’s just been a wild ride, and music has always been there for me.”