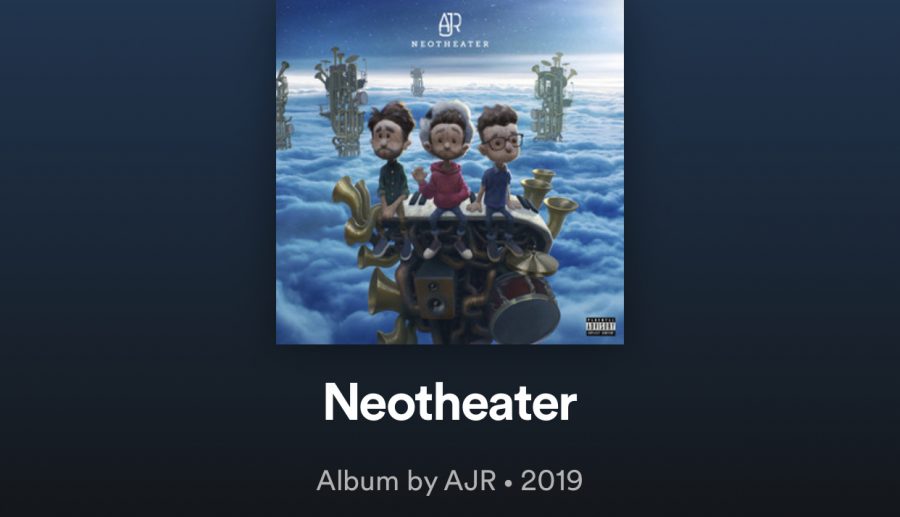 Ever since AJR’s sophomore album “The Click” dropped in 2017, I’ve been obsessed with the band. Their unique musical style and production drew me in to their world, and since then, I’ve been eagerly anticipating a new album.

On Friday, April 29, their third album titled “Neotheater” came out. All in all, I thought it was an amazing album that not only showed musical progression, but emotional maturity. Each song had a specific purpose, message, and presence on the track list. It seemed like AJR really put their all into this album, paying attention to all the little details that can make a song truly great.

First and foremost, I would label Neotheater a mostly high-energy album. Tunes like “Break My Face” and “The Entertainment’s Here” provide the catchy, feel-good vibe that most of their songs are famous for. Although the pace of each song is similar to that of their previous albums, the band put a new spin on their musical style. It was a new, refreshing take on some of their classic tricks.

Another thing I appreciated from the album was the positive messages and social commentary AJR subtlety weaved into their lyrics. “Birthday Party” in particular stands out as one of the more forward songs, as one of the lyrics is “I bet my ignorance is always bliss/except ignoring pigment in our skin/I bet my country’s nice to immigrants.” This song is told from the perspective of a naive newborn baby who’s viewing the world from an perspective of innocence and curiosity. I’ve personally never heard a song from that perspective, so I found it interesting and intriguing to listen to.

The two serious, low-tempo songs were “Turning Out Pt. ii” and “Dear Winter”. Turning Out is a song from their previous album, so naturally, part two serves as a continuation of the first one. However, the main difference is that the latter focuses on the aftermath of a breakup, rather than dealing with personal insecurities.

Dear Winter is an acoustic ballad told from the perspective of a father talking to his future daughter. He essentially provides her with some life advice and light humor, while yearning to find her mom so he can actually be a dad. It’s one of the sweeter, more heartfelt tracks on the album, making it a general audience favorite.

As a whole, I’d say that Neotheater was AJR’s best album yet. Not only did it feature both upbeat and calm songs, but the musical style was exciting to listen to. In all, the album is a solid 10/10.