On My Block Season 2 Review 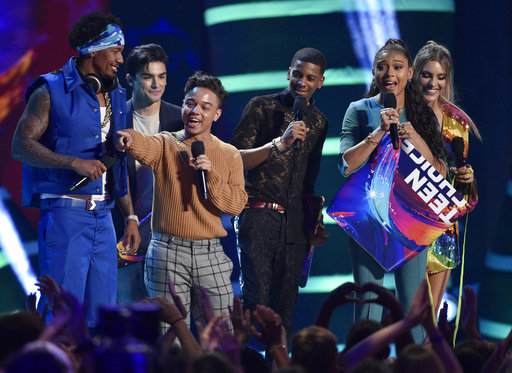 Hosts Nick Cannon, left, and Lele Pons, right, present the award for choice breakout TV for the show to, from second left, Diego Tinoco, Jason Genao, Brett Gray and Sierra Capri for "On My Block" at the Teen Choice Awards at The Forum on Sunday, Aug. 12, 2018, in Inglewood, Calif. (Photo by Chris Pizzello/Invision/AP)

Warning: This will not be a spoiler-free review. Only read this if you have seen both seasons!

Last year, Netflix released season one of the coming-of-age dramedy “On My Block”. It quickly sky-rocketed to fame as one of Netflix’s top streamed shows in 2018. Fans eagerly awaited a second season, which took about a year to make, and now it has finally arrived.

The first season was left on a pretty intense cliffhanger, leaving the fate of two beloved characters up in the air. It was certainly a strong foundation for a second season, which they utilized to their advantage.

Episode 10 of season one had Ruby and Olivia finally coming to terms with ther feelings for eachother at her birthday party. In a similar fashion, Monse and Cesar were in a romantic relationship, meaning that most of the main characters had been coupled up. Jamal had found the Rollerworld money, and everything was right in the world.

At the end of the episode, however, Latrell comes for revenge on Cesar – with the intention to kill him – but the bullet ends up hitting both Olivia and Ruby. And that’s where we leave off.

In the first few minutes of the new season, it’s revealed that Ruby is alive and Olivia has died. This all takes place about a month after the shooting, and everyone is still recovering from the situation. The main story lines are established pretty quickly: Cesar’s homelessness and the fact that he’s been outed from the gang, Ruby’s PTSD, Monse’s struggle to find herself, and Jamal’s handling of the money.

I’ll be sectioning this review by character to make things a little less confusing, since so much happened in only 10 episodes.

If you thought last season was rough for Cesar, think again. His brother, Spooky, has fully kicked him out of the gang and left him on the streets. Although Cesar did make a mistake by not following his brother’s direct order to kill Latrell, he did the right thing morally, as if he killed Latrell, he would never be able to get over it. Cesar struggles in this season with the concept of right versus wrong, which is especially hard to deal with since he’s taken full responsibility of what happened to his friends.

He was staying with Monse originally, but once her dad found out, he removed himself from the equation. He spent the rest of the season staying with all of the other characters, Jamal more than anyone. I really appreciated how the other character’s parents were so willing to take him in. The concept of family was featured this season, and how friends or guardians can be more of a family than biological parents can be.

Cesar tries to come after Latrell and his gang multiple times, and ends up failing multiple times. In the end, Spooky takes him back in after he proves his loyalty. Once he’s back in his brother’s protection, however, Cesar explains that the gang life isn’t for him and that he’s not a killer. I was proud of him for admitting to this and not following the path that people were trying to force him down.

Monse’s story line was all over the place, but very connected with Cesar. They start off the season in a relationship, but it’s proven not to last when Cesar tells Monse to choose either him or her mother and she chooses the latter. Cesar ends up getting involved with someone at his work during their time apart, which Monse doesn’t find out about until much later. It ends up destroying their relationship for good, and although Cesar could technically do what he wanted since they were broken up, I understand Monse’s pain.

Her other big plot is connecting with her biological mother, which doesn’t end up well. Monse spends some time with her mother’s family before realizing her true personality – which is exactly as her dad told her, but stubborn Monse didn’t listen. It’s revealed that her mother left her due to her race, which I thought was an interesting way to work in issues of racism. Racist people are usually introduced from outside the community, but this show highlights the racism within the community, and how people of color don’t necessarily accept other people of color.

Jamal spends most of the season focused on the Rollerworld money, which I thought was the weakest plot line. It provided some comedic relief, but seemed like a crutch for Cesar’s story. The gang was going to use the money to help Cesar escape, which doesn’t even work out in the end.

And now we get to Ruby. The actor playing him provided the most real, honest, raw performance out of all the actors. He dealt with the many stages of grief along with multiple PTSD attacks. I really appreciated how the writers included such a bold plot point – especially because we only really see PTSD from older characters on other shows. A young freshman in high school has a totally different reaction or approach to it than an adult would, making it a refreshing and necessary representation of something that isn’t touched on nearly enough.

Jasmine and Ruby’s relationship is sweet, and although I find Jasmine annoying most of the time, her advice for him about things being outside of his control was heartwarming. I feel like one of the biggest flaws of “On My Block” is how they only use Jasmine for humor, but never really get in to who she is as a person. This slight character development was appreciated.

Overall, the season was incredible. I loved how they weren’t afraid to tackle rough topics and portray them in a real way, rather than glorifying or undermining it. I fell even more in love with the characters and their performances, especially how they normalized things like emotion, affection, and crying for both guys and girls. In general, guys showing emotion is stigmatized as “uncool”. This show worked hard to erase that stereotype, and it’s a step in the right direction.

I really thought they weren’t going to have a third season at first, due to the way they wrapped everything up. And although I love the show, I accepted that the finale was a good, comfortable way to end things.

However, in the final seconds of the show, our beloved core four is kidnapped by – well, we don’t know who. It could be a rival gang, maybe a different gang, or even the police? I guess we’ll have to wait for season three to get our answers.