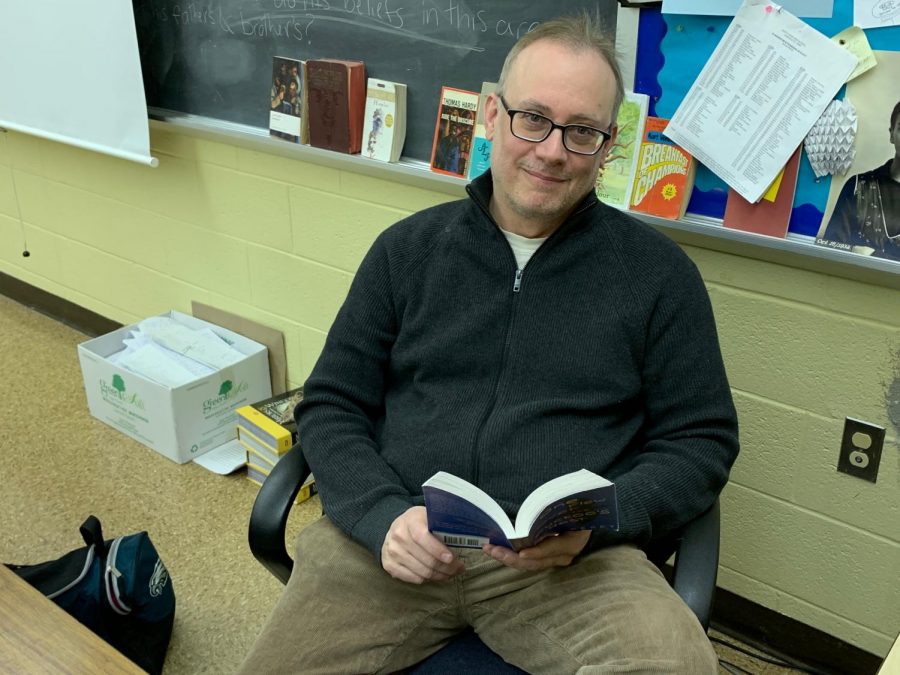 Mr. Mike Lipschutz reading a book at his desk.

English Teacher Mr. Michael Lipschutz has been at North Penn High School since 2001. This is quite some time in one location, but how did his high school teaching career begin? Most college graduates aspiring to teach at the high school level transition directly to their first high school job, but this wasn’t the case for Mr. Lipschutz, mainly for the fact that he didn’t see himself re-entering the high school atmosphere so soon.

After graduating high school, Mr. Lipschutz attended Penn State University for his degree in English. From there, he moved onto Arcadia University as a graduate student. With his newly earned English degree, he was excited to dive into the world of teaching…at the college level.

“I taught college for about five years…a number of places [including] Penn State, Bucks, Montco, and Drexel,” shared Lipschutz. “For what they pay for part time professors, you can’t eat. If you live at home mom makes food, but it got old,” he continued.

After getting a hands on experience in multiple college buildings, going to and from different job opportunities, he decided that he was no longer interested in following his dream in becoming a full-time professor.

Lipschutz stated, “I made a transition for practicality sake and it turned into something I liked.”

North Penn, however, was not his first high school gig. Reading High School began his career as an English teacher, which to him, was a little scary. Being new in this field, he didn’t feel confident.

“Going from college to high school is a whole other thing,” Lipschutz explained.

After dealing with a challenging student base, he didn’t have any idea what he was getting himself into. From Reading High School, he transitioned to Philadelphia schools, allowing him to truly understand the basics and fundamentals of teaching, including how to manage a classroom, how to get along with teenagers, and overall, how to like the profession.

“As soon as I got my certificate, a job popped up (North Penn),” said Lipschutz.

After 18 years at North Penn, Mr. Lipschutz is still here, impacting the lives of his students day by day.

“I enjoy being in a classroom, I enjoy working with students…in particular if they are applying themselves,” Lipschutz responded

Although English takes up most of his time, he is able to keep himself busy with things like side hobbies and his bucket list.

Here are some fun facts:

Mr. Lipschutz was a student teacher in London.
One of his many hobbies is wood-working. In fact, it is a goal of his to set up his own shop.
A few years of Mr. Lipschutz’s life have been dedicated to creating custom race bikes.
Playing the guitar for 25+ years has allowed Mr. Lipschutz to build an impressive guitar collection. It was a goal of his to become a rockstar when he was younger.
His cat, Lily, loves to keep him company at home.
Have you ever been to Nick’s Roast Beef in South Philadelphia? If so, don’t be surprised if you run into Mr. Lipschutz. He recommends this place with a passion.
A bucket list item of his is to master his bank shot in pool.

Mr. Lipschutz may be an English teacher, but a lot more than English can be learned from him.