The 411 on commanding a SWAT team

Detective Sergeant Jay Ciarlello, a 22-year veteran of the Hatfield Police Department, spoke with us about his 19 years as an officer and Deputy Commander of the Montgomery County SWAT (Special Weapons and Tactics) Team - Central Region. 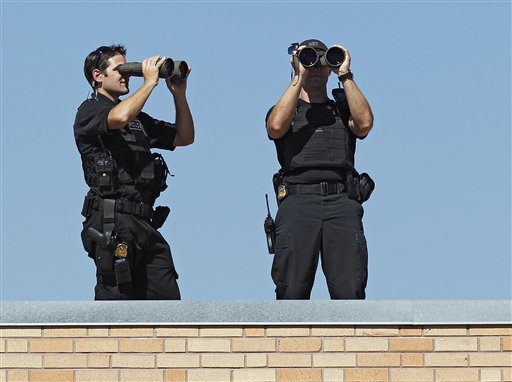 The responses below are entirely Ciarlello’s, lightly edited for clarity and length.

What educational and career backgrounds are typical for SWAT officers?

The education of the team members varies. Some pursued the military after high school and bring their military education to the team. We have other members that went right to college after high school and we have others who have done both. As one of the commanders, I personally have a master’s degree from Saint Joe’s  in Public Safety Management and others do as well. We require a minimum of three years full time police experience who have excelled in their individual police department.

We then require a 40 hour Basic SWAT certification, a 90% firearm proficiency on a very tough shooting course and also the passing of a strenuous physical fitness course several times a year. Once officers are selected to join the team, they are required to attend 16 of hours of training each month, along with an additional 36 hours a year team training at Fort Dix.  Any member who misses a training day is placed on reserve status until they make up the training. We also remove members who have 3 unexcused missed practices a year.

Montgomery County SWAT-Central Region, which is our team, is made up of part time members from the 25 township and borough police departments we cover. We cover approximately 176 square miles of Montgomery County, with a population in excess of 300,000 people. We currently have 58 members, [including] command staff, entry members, snipers, negotiators and medics. So on a regular day all these police officers or medics work at their individual departments or ambulance stations. If a call out comes in, they all respond to the scene and get in their SWAT gear, [switching] roles.

What was the most unexpected thing you learned (about the job or yourself) during SWAT training?

In SWAT, we always preach that the way we practice is the way we perform during SWAT missions. In police work, specifically SWAT, you can’t have a bad day. You can never lose focus. If a SWAT operator making the smallest mistake, it could cause themselves or someone else injury or even death.

We run very rigorous trainings and ask members who are feeling even a slight decline in their performance to step down from the team or assume other roles. Some of our older members who have a ton of experience, like myself, move into command roles, because they can’t perform (In the field) like they once did, but have a place on the team with job knowledge.

At 45 years old, I know there are things I can no longer do in the field at the “SWAT Level,” so I moved to a new role at the command post. It was very difficult for me to accept that I wasn’t in my 20’s anymore, and to come out of stack after so many years.

What about your job were you least prepared for when you started?

I was not prepared for some of life’s realities. I knew they existed, but a lot of people don’t experience them who are not in law enforcement. We deal with people who are at their worst.

Some very good people who are suffering addictions who may commit crimes to feed their addiction. We deal with children being raised in harsh environments who you don’t feel will ever have the chance to succeed. We deal with suicidal people, some of [whom] attempt to force us to take their life by waving weapons.  We also deal with really bad people who are a drain on society and need to be arrested.

Being a father, I was not prepared to deal with cases where children are victims. After 22 years in law enforcement, these cases still bother me, and I think they always will.

What are the main differences in training for entry operators, snipers, and negotiators?

For a team to be successful, every group needs to be proficient in their craft.

Operators work on entries, movements, breaching doors, shooting skills. Basically, these are the members of the team you would see up front with shields going in the door.

Snipers work on movement drills to get into positions of cover and concealment. We rely on snipers to provide real-time intelligence about what they see from different vantage points. They also are required to have excellent marksman skills. Our snipers regularly shoot from 200 or more yards away and are required to hit targets not much bigger than a quarter.

Negotiators spend their training time working on scenario-based drills. They role play for each other and work to hone their communication skills. Our current negotiators are some of the best I have worked with in my 19 years in SWAT. They resolve many of our incidents by speaking calmly and getting people in crisis to come to their senses and surrender peacefully. This is a very specific skill not everyone has. It requires extreme patience.

Several times a year we all come together and work on scenario-based call outs to make sure we are all operating as perfectly as we can, and [we] make adjustments as necessary.

What always happens during a successful mission?

I view a successful mission as one where there are no injuries to either the police or any civilians, including any adversaries. We brief before each mission to make sure everyone knows their assignment and debrief after each mission to go over the call out. We ask ourselves, ‘what did we do great?’ and ‘what can we do better next time and learn from?’

In 19 years, I have been on well over 100 call outs. Some were great, some were bad, but none were perfect. Like with anything in life, when you think you’re perfect, you’ll never get better.

In what situations would the North Penn community likely interact with the SWAT team?

The North Penn community is a very safe place to live, and typically our SWAT team may only handle a handful of callouts in this area a year. This community is more likely to see us in the area training or at community events. However, MSWAT-CR is always prepared to respond at a moment’s notice, if activated by one of our local member police departments, to bring a safe resolution to a critical incident and ensure the safety of our residents.