Love, Simon is a movie you’ll want to come out to see 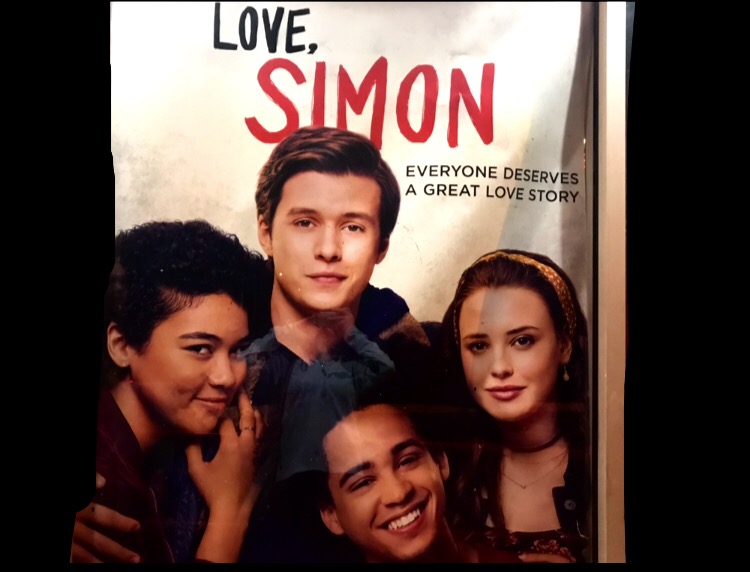 Love, Simon is a movie about a high schooler named Simon who is secretly gay. As the movie goes on, he finds that staying in the closet is harder than it seems.

Throughout Love, Simon, the characters and the plot are exactly like any high schoolers life and reiterated that message from beginning to end. The thing that makes this movie stand out more than others, is that it actually does portray the life of a teenager, but without rounding the edges and showing raw human emotion that people do face.

Summary: Simon, the main character, is gay but has yet to let anyone know about this huge part of him besides an anonymous boy online who goes by Blue. Blue and Simon get closer as the movie goes on, but both fail to reveal who they are. A fellow member of the school play, Martin, who has a crush on Simon’s friend Abby discovers Simon’s email relationship with Blue and proceeds to blackmail Simon. Simon has to bring the two together or else Martin will tell everyone in school about his secret. Coming out to his friends and family is something Simon wants to do on his own time and he isn’t ready for everything to change yet, so with no choice, he decides to help Martin. But then Simon’s other friend Nick has feelings for Abby, Abby also has feelings for Nick, Simon thinks Leah (his best friend) has feelings for Nick but is actually in love with Simon, and everything gets completely messy trying to stay in the closet.

Message(5/5): You may think that the natural message behind the movie is obvious and a little cliche about a boy facing life after coming out, but the way the actors react is the true message since they act how many families in real life respond to this. Although the way Simon is forced to come out stirs the plot of the story, the way his friends and family react to his coming out shows how it affects more than just Simon. His friends were mad at him for lying to cover up his secret, Blue deleted his emails, his younger sister was confused, and his parents were shaken up for a little bit. Everything is resolved by the end showing that everyone knows Simon is still the person he was, like you are the same person if you come out.

Plot (4/5): The plot has its pros and cons, and while it keeps you engaged the whole time, there are some cheesy aspects of it. The plot stays realistic with aspects of social media, friends, and parties, but when it comes to Martin’s scenes it gets a little unrealistic. Martin has Abby stand up on the table in a waffle house screaming that she is an independent women, then at the football game he interrupts the national anthem to ask Abby out in front of the whole stadium. Something would be more realistic if it was along the lines of a promposal, but really interrupting the national anthem? Security would have had him down in a real situation.

Cast (4/5): The cast was very well put together with characters of different genders, races, and interests.  Simon was also very attractive which is why the whole theater shed a tear when he came out and Leah was in love with him. The assistant principle and play director had everyone laughing in every scene that they were in. They weren’t afraid to use words and phrases that most movies avoid and bring up real problems everyone in a high school faces. Some characters that Simon thought were Blue were sometimes irrelevant to the story and would shortly never see them again when he found out they were straight.

Overall (12/15): Overall the film was a success and included present issues and struggles many people face with a little bit of laughter. For people who know someone who came out as homosexual, they can relate to this movie more than others and maybe see it from a different perspective. Those who don’t know anyone who have come out still can enjoy the movie as much as anyone else. Nowadays movies try to stay away from offending anyone or anything, but Love, Simon got to the point, and stuck with it.