Life experiences are a factor in the classroom for Mr. Philip Brewster 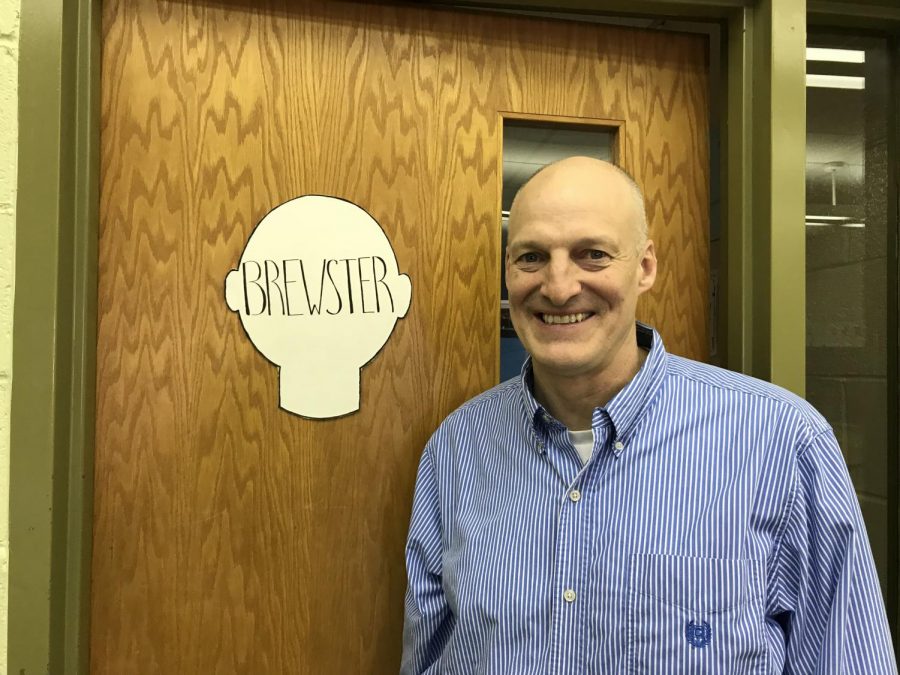 KNIGHTS IN THE CASTLE- Mr. Phil Brewster outside of his classroom in the math department at North Penn High School.

TOWAMENCIN- From Delaware, to Florida, to New York, and finally to Pennsylvania, North Penn math teacher Mr. Philip Brewster has finally found his home in E103. Closing in on his twelfth year at North Penn, Brewster has been all around the East Coast learning and teaching, and he brings all of his experiences and wisdom into the classroom. Brewster has always learned that working hard conquers all, and he continues to pass that onto his students in his Geometry, Algebra II, and Pre-Calculus classes.

Brewster was always good with numbers. It was one of the only things that came naturally to him even when he was young. After graduating from Sea Breeze Senior High School on a beach in Florida, Brewster traveled up to chilly Pennsylvania to pursue a major in Engineering and to wrestle at Messiah College. Two years into his college experience he switched to a Math Major as his only love of engineering involved the numbers.

“I did not plan on being a teacher at all, I wanted to be an actuary. They are the brains behind insurance companies. So right after college I got a job doing statistical analysis, and it was so incredibly boring. After a year and a half I quit that job,” explained Brewster, reminiscing on his first job out of school.

Not knowing what he was gonna do or who he wanted to be didn’t scare him, for his dad taught him and his siblings that if you hussle, you’re going to be okay. Brewster credits his dad for a lot of who he is- he came over from Ireland when he was eight to live in the Bronx. Every short falling Brewster runs into can be made up by hard work and effort. So when he hit a wall after graduating from Messiah, he just needed to work hard to get where he wanted to be.

“I lived in a van for four months and followed the Grateful Dead tour. I changed a lot as a person. In high school and college I was very focused on math, so I became a much more social person after college. I knew I wanted to talk to people rather than just work with numbers,” said Brewster.

The next stop for Mr. Brewster was in West Virginia at Marshall University where he received his Masters and teaching certificate. To make ends meet during graduate school,  Brewster and a friend of his started playing volleyball together. What started as fun turned into them competing in tournaments around campus. Soon enough they started winning cash prizes at these tournaments to pay for their food. (The two of them even made it into a volleyball magazine for their winnings!)

His teaching career took off in 1993 in Hershey, Pennsylvania where he taught math for the first time in front of his own students. For the next thirteen years he was jumping around to schools in Lebanon, Palmyra, and New York City.

“There are ‘have’ schools in this world and there are ‘have not’ schools in this world. North Penn is the ‘has has has’ school. It really has it all. A lot of kids think that the grass is greener on the other side, but really North Penn has anything you could ever want with the 80 clubs and every sport you could imagine. You can find a niche anywhere, if you want to be involved and you want to do something, you have so much opportunity here. Some of the schools I taught at had no money at all, like New York City didn’t have enough money for paper. It is really the best school I have ever been at,” explained Brewster.

As one could imagine, there is method to his madness in the classroom after 25 years of teaching. After many life experiences, Brewster takes it upon himself to know what is best for his students and challenges them daily to prepare them for the rest of highschool and beyond. Many student have come back to him expressing gratitude for the obstacles he put them through.

When he isn’t teaching high schoolers how to factor, he seems like an ordinary person with his love of golf and gardening. But that is nothing compared to his neighbors…

“The lady two doors down from me had two alpacas, and a farm uses her land as a nursery for the alpacas, so they brought in 2 new male alpacas temporarily. The smaller of the two kept getting bullied, and we are against bullying by the way. The bigger alpacas kept spitting on the smaller one, so he jumped over the fence and escaped. He was worth around $50,000 because of the color of his wool, so I ran over there and chased the alpaca down to put him back in, but then 5 minutes later it escaped again. So I ran back out and had to put him in a headlock. He was very grateful, so he sent me a card the next day with his hoof print on it,” noted Brewster.

When he isn’t spending time chasing alpacas, Brewster can be found spending time helping his students.  If you have ever stayed after school to make up a test and seen a classroom full of students eating crackers and solving problems, you have just passed by the highlight of Mr. Brewster’s day. His students have the opportunity to stay after school on most days to get help, do their homework, and understand the subject in a way that makes sense to them. Using many stories and analogies that parallel the subject being taught, Brewster communicates more than one way of looking at the problem.

“The best part of my day without a doubt is helping kids after school because I know they truly want to be there. I don’t ever make kids come after school, but I can tell these are the kids that are hungry to succeed and I love spending time with them,” said Brewster.