Color Guard spinning their way to the top 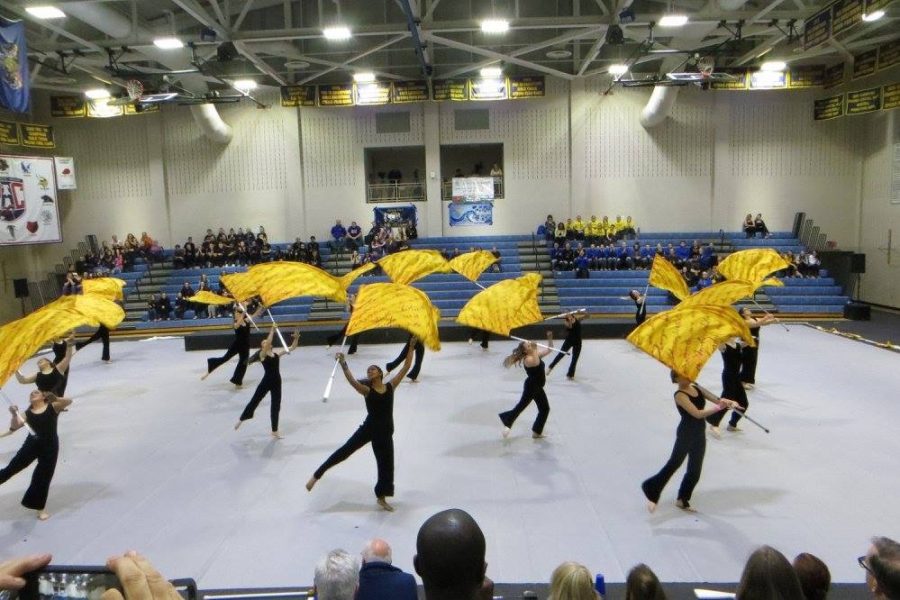 TOWAMENCIN- Putting in over twenty hours a week, the North Penn Color Guard continues to improve their skills and work together more than in previous seasons. After ending the outdoor season with the Marching Band, the spinners head indoors for practice as they compete in several competitions throughout their winter season. The scores from competition to competition may only improve slightly, but the difference between season to season shows just how hard they have been working.

Recently, the Color Guard team traveled to Spring-Ford High School for their first competition of the season. The team placed 1st and went home with a great victory under their belt. Soon after, the team attended the Regional Competition at Council Rock South High School. Coach Lisa Cullen and the spinners placed 7th out of around 20 teams with the first performance of the day. After stepping up their game, they finished in 6th place which is a major improvement from previous years.

After coming a long way to get to the top, the team still has areas they can improve upon for the future. With these adjustments the team may soon perform at its full potential and stay on top.

“We were the only team within the division that doesn’t have their uniforms or props finished, so there’s a caption within scoring called ‘General Effect’ which is about the story you’re telling, what’s the theme, how is it coming across. Right now our show doesn’t tell a story yet because we don’t have any of those elements so our score for that captation is very low compared to other teams,” Senior Spinner Madison Joyce explained about their performance scores.

You may know the Guards as the people who spin flags with the Marching Band, but it is more than that. They make art by telling a story and performing it to the audience with only their flags and body movements, and it requires hard work and precision. Each competition will present the same story the team has been practicing, but the story changes from season to season.

“Out story is Operation Pied Piper, it is about a World War II in England. Families living in urban areas at the time would send their kids to the countryside so they weren’t at risk for any bombings resulting in the separation of them and their parents. We focus ours about a mom who leaves her child at the train station in the beginning so everyone is very sad throughout but at the end the mom reunites with the child, so our song is ‘Come Home’ by OneRepublic,” described Lauren Poley who portrays the Mother in the performance.

Indoor Color Guard varies a lot from outdoor when the team is side by side with the Marching Band. In indoor, the team can focus on more difficult choreography and spins without having to deal with mother nature’s elements. Outdoor tends to be difficult in its own way as they spin to live music unlike a set track where there is a bit of a sound delay. Being in sync with the band tends to enhance the rigor of their performance, but they both still convey a story.

With the transition from season to season and a whole new performance, their three Section Leaders are a chief principle in the changeover. Senior section Leaders Madison Joyce, Lauren Poley and Jenn Weasner, have been surrounded by this group of students and have been apart of the major change in the way they compete. With all three being seniors this year, they hope to become more recognized as a team at school so when they leave, the team has even more support and hopefully will spark interest in future guards.

“As section leaders we do a lot of things, we get practice ready, try to keep people motivated, we are the bridge between the student and the staff, and control the things that need to be communicated between the two bodies,” said Joyce and Foley.

On competition days the Section Leaders take the team through body warm ups, then equipment warm ups to get ready for the long hard day ahead of them. These long days consisting of hair and makeup, warm ups, performances, and awards are taken place within a span of twelve hours.

Four years ago the team was in a division lower than they are in right now called Scholastic Regional A. After blowing out all the competition they were moved up into a high division. They started out poorly, but adjusted to the judges acute scoring and accepted the challenge of developing new skills. Coaches Lisa Cullen, Lisa Clark and Eric Scharter have played tremendous roles with helping the team get to where they are today. Coaches Clark and Scharter also work with an Independent World class guard team and play a huge role in the choreography and technique within North Penn’s performance.

“Since previous years we have moved up a class, so we are performing against guards with relatively the same talent and skills, the technique is a lot more demanding, the judges are pickier about what they are looking for so it is more difficult to gain points while competing, we’ve gone from being dead last to actually winning and placing in these competitions, we also have a shot at Dayton,” voiced Section Leader and Outdoor Season Captain Joyce.

Dayton, Ohio is where the World Champion Color Guard showcase takes place.  At the showcase teams from all over the country come together and compete in six rounds of competition. The rounds provide different opportunities from different units, classes and varying expertise from beginning to advanced. The organization, Winter Guard International, promotes an elevated emphasis on education by awarding student guards with academic scholarships.

“Discipline, organization, time management, are all things I’ve learned from Color Guard. I like to be able to succeed and improve on my skills and learn from my mistakes. Having those things makes me feel like I have a voice. I am more quiet in school, but when you’re performing you don’t have to say anything, you move to show how you feel, and they watch you and they love it…… these girls are my family, I trust them with my life, i mean i have to trust them, they are throwing around metal poles right next to me,” shared Joyce and Poley.

With more competitions in the upcoming weeks, the team is ecstatic to improve and continue on their way up.