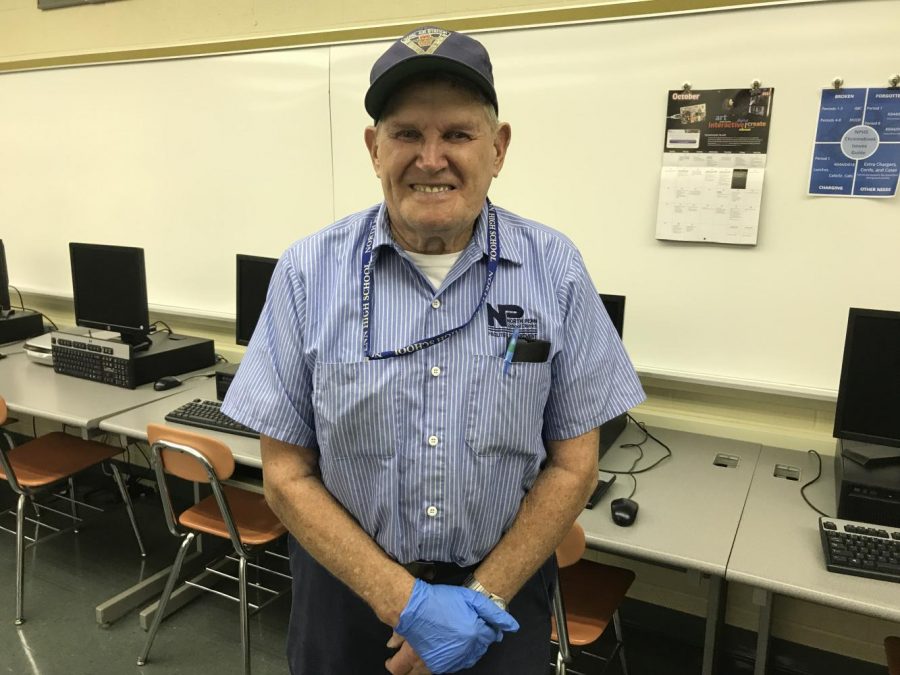 Custodian, K.O. Nelson reflects on why he continues to work at North Penn instead of retire.

“I’ll retire when I’m 97 but I won’t last that long… but I enjoy working. Most people can’t wait to get out and there’s a lot of them who retire at 62 and then they just sit there,” says North Penn High School custodian, Mr. K.O. Nelson talking about his retirement plans. Nelson is in his late 80s but he has certainly had an exciting life before he started working in the North Penn School District 14 years ago.

Nelson grew up on a farm in Wisconsin but desired a little excitement by joining the Navy in the 1950’s. His military experience took him around the world via air craft carrier. He was stationed in Memphis, Tennessee, then the year following the Korean War, Nelson started his journey around the world in Brooklyn, New York, and ended in San Francisco, California. What made this journey so special is that he loved what he was doing: directing and parking planes on the carrier.

In 1955 his military experience brought him to Willow Grove Naval Air Base. It was during this time Nelson earned the name K.O. instead of his given name of Kermit.

“When you were in the military all your clothes were stenciled with your last name and your first two initials because when you got laundry done that’s how you got your stuff back and somebody saw that ‘Nelson K.O.’ so they picked up on that and called me that ever since.” explained Nelson.

After being discharged from the Navy, jobs were plentiful so he didn’t need to return home to working on the farm. Since he thought the farm was very lonesome, staying in Pennsylvania suited him much better. The hustle and bustle and the job opportunities gave good reasons for Nelson to make Pennsylvania his permanent home.

Before he started working for North Penn, Nelson drove tractor trailers, worked in a few machine shops including one which lasted 11 years, and worked for a millionaire at his big estate. He likes his job here because nobody bugs him and it only gets a little hectic when someone is out and everyone has to pitch in on their run.

Beginning his 15th year at North Penn, Nelson has worked steadily at North Wales Elementary and North Penn High School by performing both custodial work and assisting in renovations during summers.

Although he has worked in the school district for quite some time, there are differences between working in elementary schools and the high school. Many of the faculty and staff leave North Penn High School by the time Nelson starts his shift in the late afternoon, so he misses his days at North Wales when he had a chance to chat with the the teachers and staff. Having a large staff here at the high school makes it hard for him to know whose classroom he is cleaning or what the teacher even looks like.

Although he spends his days working, Nelson makes sure his free time is filled by enriching and expanding his mind.

“I have this one habit, and it’s a really bad habit, though some say it’s a good habit. I read. Books, newspapers, anything that has print on them and I’ve done that probably since before we had electricity on the farm. I’ve got over a thousand hard covered books in the house and I’ll be dead before I can read them all,” said Nelson.

When he’s not working or reading Nelson likes to spend time snowmobiling. For the last 37 years, Nelson, his wife, and extended family have gone up to Maine for a week every year in the winter. His family prefers to go closer to the Canadian border because there is more snowfall than Southern Maine. In a total week he estimates snowmobiling around 600 miles.

Although most can’t wait to be retired, Nelson finds that working is his true passion. It’s nice to go snowmobiling and read a book, but Nelson has made it imminent that working is a wonderful form of fulfillment. Some may dread going to work, but it is often not the job that makes one hate it. The attitude toward the day is what matters most.

“Dedication. No matter what job you ever had, you do the best you can even if you don’t like it cause it doesn’t do any good to complain,” summarizes Nelson.