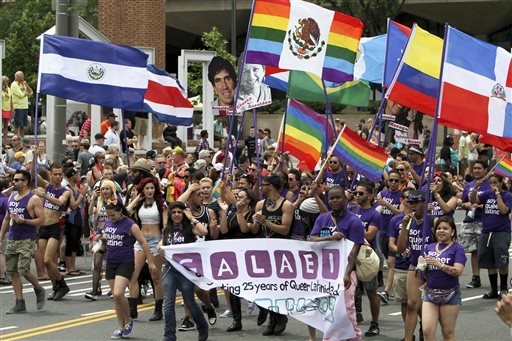 FILE - In this Sunday, June 8, 2014 file photo, people march in the annual Pride Day Parade in Philadelphia. Around the globe, LGBT Pride Month has been marked with parades and marches, festivals and dances, and in some cases, protests and counter-protests. In the United States, much of the celebrations have focused on a string of victories in states where gay marriage bans were overturned. Same-sex marriage is now legal in Pennsylvania. (AP Photo/ Joseph Kaczmarek, File)

The concepts of homosexuality and gender identity aren’t ideas that have come into practice in the last century but rather have always been a part of humanity. Ancient societies around the globe embraced the idea of same-sex relationships and “two-spirit” individuals as commonplace in their world.

So, now instead of looking forward from the era of the dawn of man, look back to the recent past from the precipice we are standing upon today. The same overwhelming levels of acceptance cannot be said for the great societies of our time.

The United States just granted homosexuals the right to marry in 2015 and repealed (arguably discriminatory) laws like “don’t ask don’t tell” as recently as 2011. Noticing any patterns here? The biggest official federal milestones for the LGBT community have been within the last five years. Even more polarizing, is that the Stonewall Riots that started the Gay Rights Movement were in June of 1969, showing that no physical changes came about for another 30 years.

Besides the Gay Rights movement steadily fighting for acceptance, the majority of the past century was a black hole of hate for those who were not straight and cisgender.

In the 50s, it was more socially acceptable for a gay man to marry a woman and suppress his sexuality, as well as to receive treatment for his homosexuality, which was considered a mental disorder.

And for those who were Transgender, living as their true selves was completely unheard of.

Before this movement steps into the unknown and ever changing future, it must be known what is it like being LGBTQ+ in today’s society.

Will Butler, pansexual and transgender male junior at NPHS, touched upon some of the issues of living as an LGBTQ+ teen today.

According to Butler, one of the issues of being transgender today is identity documents: driver’s license, passwords, and other legal documentation.

“If you are under the age of 18 you have to go through the court system,” said Butler.

Something so personal as one’s name, if under the age of 18, would take a lawyer, an ample amount of paperwork, copious days in the courts, and fees for everything previously stated. In the state of Pennsylvania, it is easier to change the gender listed on your birth certificate because of a statute passed in 2005. The statute states that the only thing the court needs in order to amend your birth certificate is a note from your attending a physician.

Another “hurdle” for transgender individuals is health care. There are very little to no LGBTQ+ centers located near Lansdale, PA. The closest for LGBTQ+ teens would be CHOP (Children’s Hospital of Philadelphia), which is still 45 minutes to an hour away.

“It’s hard to get hormones. Not only do they have to believe that you are completely sure, even if you know you’re sure, and you have to be mentally stable enough,” explained Butler.

After health care, another topic within the LGBTQ+ community is acceptance.

“People [at North Penn High School] don’t really care or they accidentally use the wrong pronoun, and they apologize, and I’ve never gotten bullied,” stated Butler.

North Penn, also, has gender neutral bathrooms, which Butler noted as a brave action, as not many high schools go out of their way to support their transgender community.

As the idea of acceptance always surrounds the LGBTQ+ community, religion has just as invariably been a reason not to accept it. Older generations have a hard time accepting the changing today’s heteronormative society, because of the more conservative and religious views some grew up in.

Butler noted that his grandmother refuses to call him Will and most of the time will not even talk to him because of her beliefs.

“We can’t change the older generations if they refuse to change, but we can change the future generations, and we can guide them on a more accepting path,” said Butler.

“I had no idea what transgender was for most of my life,” explained Butler.

Same-sex attraction and what it means to be transgender is not focused on in school or explored widely in the media, giving LGBTQ+ kids no way to know who they are in their own skin.

What is it like for the gay community within the LGBTQ+ community in the 2016?

Eliza Frey, a freshman student at Temple University, identifies as a lesbian and has insight on what it is like to be LGBTQ+ in the “real world” after high school.

“The atmosphere within the LGBT community has been making large strides. It’s learning how to accept everyone, which sounds funny but it’s still an issue. Gays and lesbians are learning to put our problems on the back burner, so to speak, because there are those in our community that currently have it harder than us. The trans community is so marginalized and it’s definitely important to start making queer spaces more available to queer gendered people,” stated Frey.

Today, inclusion and acceptance within itself is one of the biggest issues for the community.

“These issues can be seen right here in the Philly Gayborhood,” stated Frey.

Hate crimes are still a reality for the LGBT community. As recently as 2014, members of the community were of the greatest risk to have a hate crime committed against them, according to the Pew Research Center.

Frey commented on the need to move forward not only as a community, but also as a society.

“People need to realize that there is no norm, because it’s a socially constructed concept. We need to stop pressuring people to be normal,” stated Frey.

What does it mean to be LGBTQ+ in today’s society?

“[It means] having to defy gender roles and heteronormativity [and being] thankful for the strongest community in the world,” stated Frey.

In the coming era, the LGBTQ+ community will adapt and grow just like what it has endured since its humble beginnings as ragtag marches.