Salsa Club not just for chips 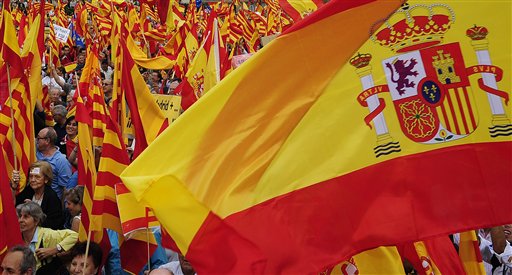 People opposed to the independence of Catalonia hold Catalan and Spanish flags during the holiday known as Dia de la Hispanidad, Spain's National Day in Barcelona, Spain, Friday, Oct. 12, 2012. Spain is observing its National Day festivities in somber mood as the traditional military pageant was scaled back to cut costs. Spain is in recession and under pressure to fix its finances while celebrating the day Christopher Columbus discovered America in the name of the Spanish Crown. (AP Photo/Manu Fernandez)

TOWAMENCIN- Some students may assume that North Penn High School’s Salsa Club is about chips and salsa or Salsa dancing. However, Salsa Club has more to it. The Spanish and Latino Student Association (SALSA Club) aims at educating students on Spanish Latin culture by eating food, playing games, and celebrating Hispanic holidays.

Salsa Club meets monthly and focuses on a different theme each meeting, such as Day of the Dead in October and Three Kings Day in January. The club also completes Hispanic style crafts throughout the year that many students may not be able to experience on a regular basis, like making papel picado, which is a decorative craft that involves cutting paper into elaborate designs. Students also have the opportunity to craft their very own piñatas.

“We are hoping to have more members this year. We have many activities planned like the soccer game and Day of the Dead. Last year we had a lot of snow days, so we missed the meeting where we teach students Latin style dances,” commented Señora Regan, advisor of Salsa Club.

Salsa Club is participating in the annual soccer tournament between the world language clubs at North Penn. The tournament is on October 23rd, 2018, and Salsa Club is inviting all of its members to participate.

The first Salsa Club meeting was held on October 2nd where students were invited to learn more about the club, while enjoying delicious snacks and drinks in the cafeteria.

The turnout was beyond the expectations of the leaders of Salsa Club.

“I am really happy with the turnout of the first meeting and hope that people keep coming to the meetings throughout the year,” explained Allison Lacianca, Vice President of Salsa Club.

Salsa Club is still accepting members, so students who were unable to make the first meeting can attend the second meeting on October 30th after school. The next meeting will be focusing on Day of the Dead, a Mexican holiday where people commemorate and pray for dead family members. The celebration is filled with bright costumes, singing, dancing, and parties. At the meeting, students will watch Coco and participate in a cake decorating competition.

Salsa Club is not limited to only students who are in a Spanish class. Any student who is interested in immersing themselves in Hispanic culture is encouraged to join. Students can join the remind to be sent a text whenever there is a meeting by texting @salsa181 to 81010.