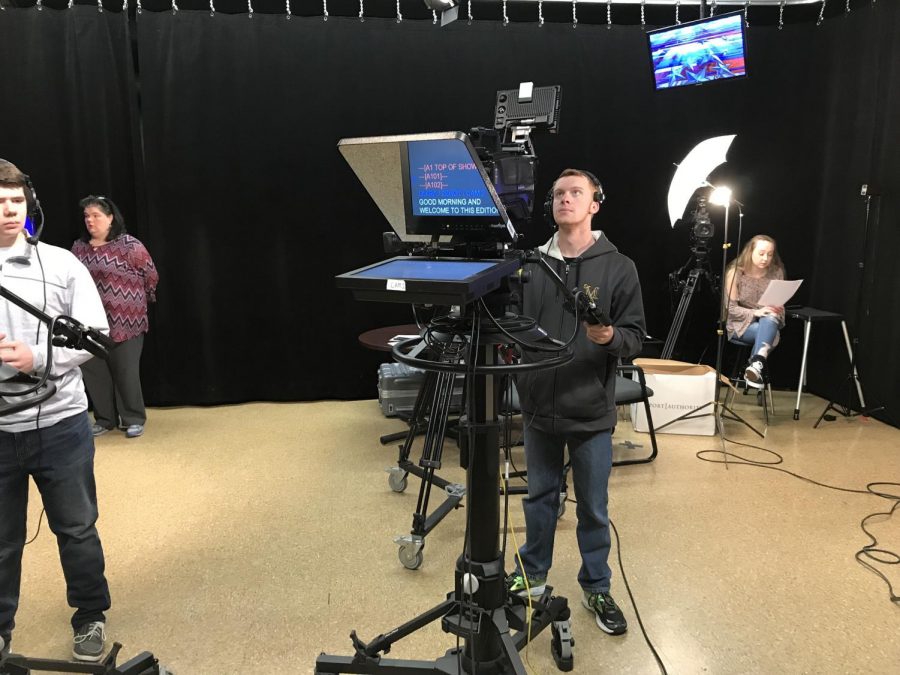 MORNINGS- The North Penn Television Crew gets in their positions for Mornings on Friday, December 15th.

TOWAMENCIN- On Friday, December 1st, I anchored for the first time on North Penn’s iconic weekly news show, Mornings. It is crazy to think that my name and face was broadcasted around the school for over 3,000 students and staff members.

During 8th and 9th grade, I anchored Pennbrook TV’s daily announcements. After watching Mornings during 10th grade, I was eager to join NPTV this year as a junior. A few weeks following my audition, I found out that I had been chosen to anchor and I couldn’t wait to start.

I thought that my two years of experience at Pennbrook would have prepared me, but I quickly learned that PBTV and NPTV were not the same. Don’t get me wrong, my involvement in middle school was beneficial, but the process was nothing compared to that of North Penn. In Pennbrook, we would go to a small green-painted room in the library a few minutes before the bell to give our daily announcements to the school. For Mornings, I had to be at school at 6am to read through the script and get ready for the 7:21am show. The NPTV studio is also much larger with three different spots being filmed and a separate control room, whereas the Pennbrook studio had one computer and two cameras. We also only wore our normal clothes at Pennbrook, but for Mornings, I was told to dress “professionally”. Though I am forever grateful for my time with Pennbrook TV, it was a much different experience at the high school.

I arrived at North Penn at 5:58am, giving me 2 minutes to cross the school to get to the TV studio. I chose to wear my hair down and a gray shirt with a cut out, which I was told was “a good shirt to clip a mic onto”. After reading the script online, it was printed out. Myself and co-anchor Rachel Rosenblatt practiced reading through the script multiple times, adamant not to mess up. We sat down at the desk about 30 minutes before air, practicing transitions and picking the best way to position our hands.

When it was finally time to go on, I was nervous and excited. The almost thirteen minute show went by so quickly, and it was so much fun. After it was over, I loved seeing texts from many of my friends congratulating me. Throughout the day, many people told me I did a great job, and although I received some criticism, it was constructive. I am excited to hopefully improve my performance and be on the show again!