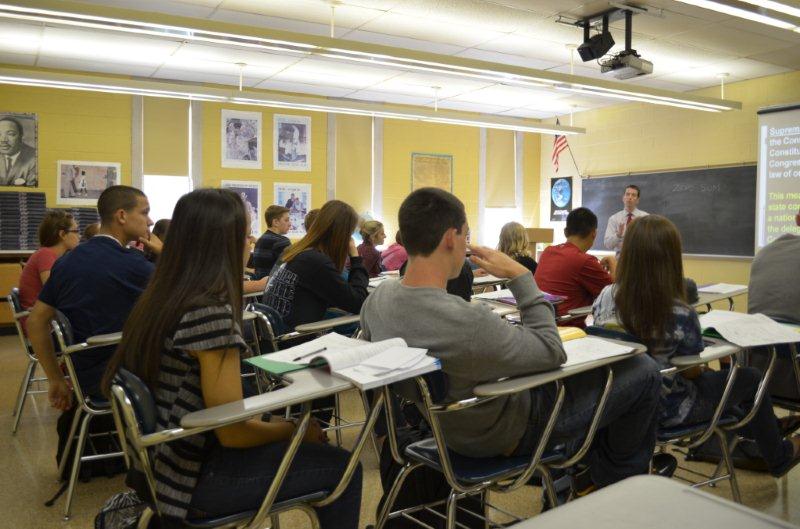 With the approaching general election that has made politics a daily topic, three political aficionados on the North Penn staff – Mr.Brumbaugh, Mr.Haley, and Dr.Hall – look back on their early memories of political events and urge young people to become politically aware.

When They Were Young

Government teacher Mr. Brumbaugh, best known as the creator and host of the Brumbaugh Challenge on North Penn’s weekly Morning Show, recalls growing up during a time when “government and politics intruded into [his] normal routine.”  Although he was young, he felt the significance of the Watergate Scandal when the television shows he watched were preempted by the Watergate hearings and when adults in his family were gathered in his grandfather’s study watching President Nixon resign from office.

“The whole nature of how upside down everything was provoked an interest in me [for politics],” he said. “It was a period of real change in America… the construct of the relationship between the people and the government changed.”

Brumbaugh also remembers having Byron White as a neighbor when he was young, only to find out after he had moved away that White was a Supreme Court Justice.

“He was just a neighbor who would throw football with us and had kids who were a little older than us,” he said. “If I would have known what I know now, I would have had so many questions for him.”

Mr. Haley, who teaches Government and advises North Penn’s Mock Trial Team, remembers that the gas crisis of the 70s, which involved gas rationing and high gas prices, prompted an interest in him to pay attention to what was happening in the country – “When I first learned how to drive, I remember sitting in my car in long lines just waiting to get a few gallons of gas,” he said. The gas price now, he added, is reminiscent of the price then.

The 1980 election of Ronald Reagan versus President Jimmy Carter, the first in which both Brumbaugh and Haley could vote, was an interesting election to Brumbaugh not only because he snuck into the Democratic National Convention in New York that summer but also because it bears a number of similarities to this year’s election: an incumbent president, a weak economy, and turmoil in the Middle East. In addition, polls showed a percentage increase for President Carter after the Democratic National Convention, as they have for President Obama; however, despite the 8% lead for Carter, Reagan beat the incumbent. “I’m wondering if history will repeat itself,” said Brumbaugh.

Dr.Hall, who teaches Government and Topics of American Life, said of his first election in 1992, Bush versus Clinton, “It was a great time to be able to vote.” He continues, “I have never missed a single election since I was eighteen years old. I vote at every single primary, general, and special election.”

Brumbaugh’s most memorable voting experience centers on a man whose dedication to voting he says he’ll never forget.

Knowing he’d be busy working all day, Brumbaugh went to the polling place early before work and was the first one there. An old man came and started to frown at him. Confused, Brumbaugh eventually asked him what the matter was. The old man replied, “I’ve always been the first person to vote.”

“So I said ‘Be my guest’, and then he was all excited,” said Brumbaugh.

“He had apparently been doing this for decades – being the first person to vote,” said Brumbaugh. “I really respected him alot…So many people take the right to vote for granted.”

It is everyone’s civic duty, in Brumbaugh’s words, to be “informed, educated, and involved.”

“The sooner you are aware [politically], the better,” said Haley. “Knowledge is power. ”

And indeed it is. Politicians are “hesitant to cut things for senior citizens too much because senior citizens vote in large numbers,” said Hall. Therefore, when a larger percentage of young people become well-informed and active voters, “politicians will work a lot harder to get [young people’s] support than they do now,” added Hall. “It allows you to have a stronger voice in government.”

The 2008 general election saw an increase in young voter turnout. According to CIRCLE, young voter turnout in 2008 rose to 51.1%, the highest since the 52% of the 1992 election. The voter turnout for young people has been steadily increasing since it dropped in 1996 to 39.6%. Political observers are watching this election closely to determine whether this trend will continue.

How to Keep Informed

Being informed is “more than preparing yourself to vote,” said Hall, “[It is] also being a good citizen.” Specifically, he says there are “ a lot of issues that affect everyone: war, taxes, regulations for the environment; but there are some things that have a unique impact on young people [such as] funding for college and opportunities in the [workfield].”

Today’s technology has made easy the access to information – from news channels that run all day, online news sites and blogs, to news apps on the smartphone, “I see no excuse for young people not being aware [politically] because they have [information] at their fingertips,” said Brumbaugh.

Haley advises students, on developing more rounded views on issues, to not only “listen [to] and read” about what is going on in the news but also to “consider both sides [of an issue] and not to ignore someone you don’t agree with… because they do have a valid point.”

In this period before the general election, Haley suggests that we listen to politicians with “a critical ear.”

“You will hear what the candidates have to say about fixing the economy…but don’t just believe it; listen to what they have to say and do your own reading and research and figure out if what they say is possible or true.”

Perspective of a Candidate

Having run for the Pennsylvania legislature twice, Hall has an “understanding of what candidates go through” and brings his perspective to his students – “I know what it’s like to knock on doors… to target people with a mailing campaign… [and] to raise money,” he said. “When local people are running, [I’m] very appreciative of what they’re investing, and I try to be very respectful of that.”

At local elections,“I place a very high premium on how good a listener someone is and how accessible they are,” said Hall. “There are people I may agree with on a lot of the issues who I don’t think are fit for office because I don’t think they have the right disposition for listening and reflecting the will of their community.”

Click here to register to vote if you are eligible to vote for the first time.

In the meantime, keep informed, even if you are not yet eighteen. Here are just a few of issues that directly affect young people: