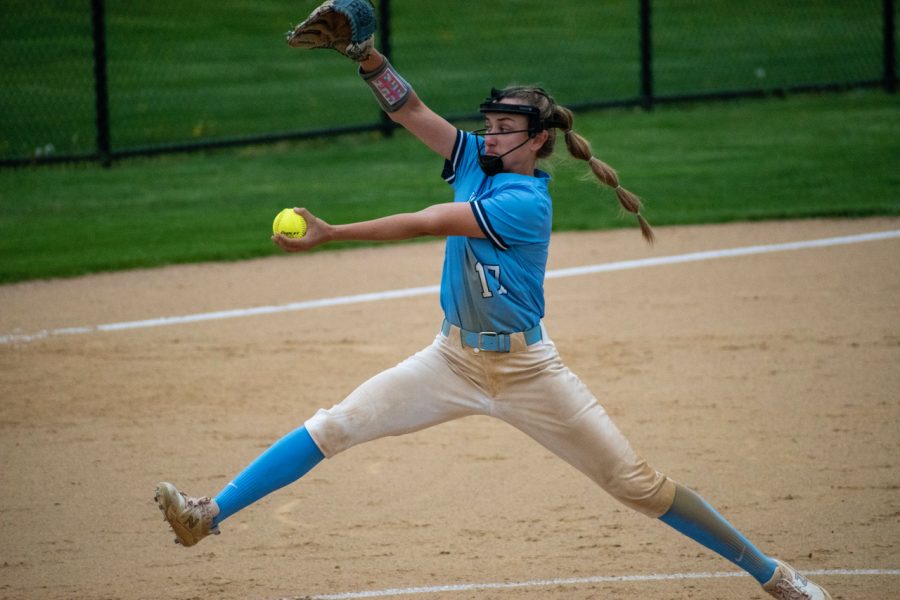 TOWAMENCIN- 11 runs and another dominant pitching performance was the recipe for the Knights to keep their undefeated streak going.

The game started with a stellar first inning by the Knights. Pitcher Julia Shearer struck out her first three batters making it a quick top of the first for the Owls. Shearer and catcher Sarah Sabocsik both walked and stole, putting both runners in scoring position for Annabelle Smink. Shearer scored off of a grounder from Smink. First baseman Bri Wilmot singled, scoring Sabocsik giving the Knights an early 2-0 lead.

“If we get timely hits, who knows what can happen. That’s what we’ve been working on, a lot of situational hitting,” Head Coach Rick Torresani said.

After a walk for Gianna Cimino, Maddy Gronback drove in another run with a single giving the Knights a 3-0 lead to end the first.

Shearer came out and pitched from where she left off, striking out another three batters staying perfect through her second inning. Shearer would go on to strike out a total of 15 batters.

Shearer started off the 3rd inning with 2 more strikeouts giving her 8 straight. The perfect game did end after letting up 2 singles, but a strong recovery by Shearer kept the shutout alive.

In the bottom of the inning, the Knights added 4 more runs with RBI contributions from Cimino, Gronback, and Sophia Collins giving them an 11-0 lead.

“We are playing really good Softball. We are just playing North Penn Softball. They are doing the right things, are always focused on what they are doing, and they know that to get to the place we want to go they have to play at our level, not the level of the competition,” Torresani said.

The game ended with a big strikeout from Shearer completing the shutout and giving the Knights an 11-0 win improving their record to 11-0 on the season.

This win over the Owls was Shearer’s 9th shutout of the season and the Knight’s 7th game with double-digit runs. The Knights are ranked #1 overall in Pennsylvania and #20 ranked in the nation.

“It’s always a lot of pressure being on top, but we are just trying to play our game, we are trying to keep our momentum going and the pressure and teams out to get us just fuels the fire and makes us want to play better,” Shearer said. “We just have to stay strong and not get in our heads. The game is all mental so playing with a  clear mind is key”.

The Knights finish the week with a game Thursday at Council Rock South at 3:45 and on Friday at home against their toughest regular-season challenge yet, Pennsbury at 3:45.